The story of SS

The story of SS

Our live camera feed is back up!

The live camera feed hosted by Forestry and Land Scotland is currently back up and running. The feed suffers from slow broadband issues, but we have people in the field working on a solution. Although intermittent at times, the feed is back. You can still see videos from the feed, updated every week, on our Osprey Playlist. Here are the highlights from this week!

This week’s osprey highlights from the Tweed Valley. Click to play. 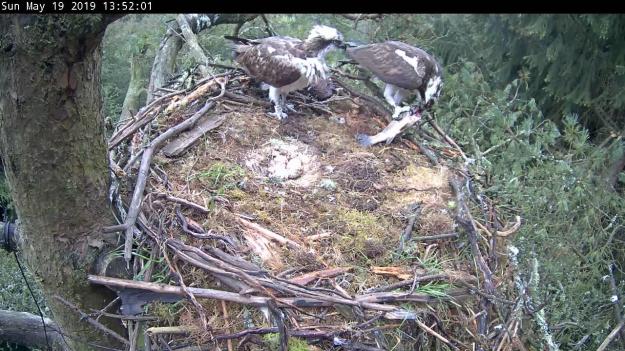 SS returned with a fish for Mrs O

The main nest remains a place of quiet domesticity again this week. The pair are waiting for the eggs to incubate, but the process is a long wait. Mrs O also had a long wait for her partner, SS, to return to the nest at the weekend. Volunteers were concerned that SS had not been seen at the nest for two days during volunteer shifts, so it was with a sigh of relief that they saw SS finally fly in with a good-sized fish on Sunday. 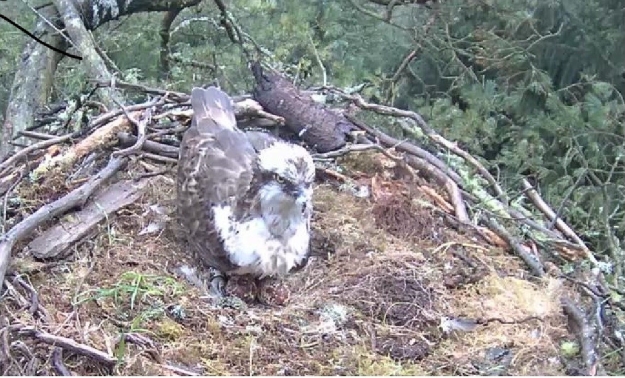 A messy fish meal leaves sticky feathers on his beak

Judging by Mrs O’s attitude, he must have been back at other times with fish because her actions were not that of a ravenous, abandoned, damsel in distress, but rather a ‘lady who lunches’. She rose from her egg-sitting spot and took the headless trout from SS, carried it in her talons up to the perch above the nest and tucked in, devouring every morsel including the tail in a leisurely fashion.

The whole meal took 35 minutes, and she was a very contented, well-fed mother to be. Meanwhile, SS took a turn to keep the eggs warm while she was eating. The spoils of his catch, in the form of sections of fish head, were clearly sticking to his beak. The sticky blood caused some downy feathers to stick to his bill. He was most in need of a napkin to save his stately demeanour but needs must and a good scrub against some nest sticks brought him back to his usual well- groomed look.

The life story of SS 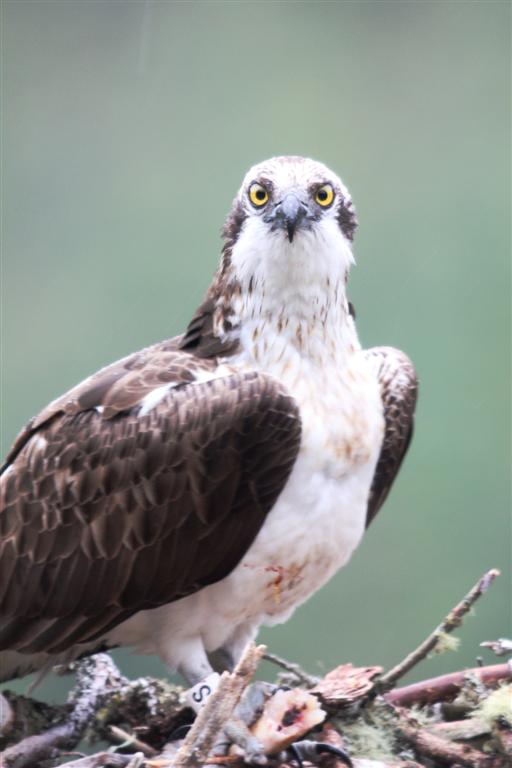 A handsome SS photo taken in 2012 by Tony Lightley

Because white leg SS is 20 years old this year, a check back through the records to look at his life history and that of his offspring proved to be quite revealing.

SS fledged from a nest in Aberfoyle in 1999 and was fitted with his white leg ring, SS, on the right leg. He moved to Tweed Valley in 2004, and it has been his summer residence ever since. He was with his original partner until she died in 2014. They successfully raised 26 chicks between them.

We do not know where he spends his winters. Every year he leaves Tweed Valley in September and does not return until the following year in March or early April. We presume he goes to Senegal or Gambia, a popular osprey winter haunt, but he has never been spotted there or anywhere on his journey north or south. An international bird of mystery, a regular James Bond hero, or just plain SS, an ordinary migrating bird doing what he does best.

When his partner died in 2014 we witnessed it all from the live camera and it was heart breaking to see the desolate figure of SS, at the nest and his 3 dead chicks. They died because they had not had a mum to keep them warm while SS went out to hunt.

We were absolutely thrilled when he returned in 2015 and found a new mate, and they raised one chick (FX9), which sadly disappeared a week after fledging. In 2016, another new partner arrived for SS. This was a young female from the Muir of Ord, but again the summer ended tragically with one egg unhatched. The one chick that did hatch died in the nest. AS6, the young female, never returned to nest with SS again.

Then, in 2017, the indomitable Mrs O arrived and they became a pair. They were too late in the season that year, and didn’t produce any eggs. Mrs O squawked her way through the summer and was quite aggressive towards SS at times. But in 2018, they cemented their partnership and raised Tweedledum and Tweedledee. Sadly, tragedy again struck, the two chicks never made it out of the UK on migration.

This year, Mrs O and SS have three eggs and we are hoping that they will have a happy season. We are looking forward to 3 little chicks soon.

The Offspring of SS

Another reminder for past volunteers to get in touch if they would like to celebrate SS being 20 years old this year on 8 June.

Contact Diane on This email address is being protected from spambots. You need JavaScript enabled to view it. to confirm your attendance. We would love to celebrate with all past and present volunteers and project supporters, and share a few stories. There’ll be a chance to show off your osprey-themed talents too, be they arty, crafty, wordy, ‘techy’, musical or just plain daft!