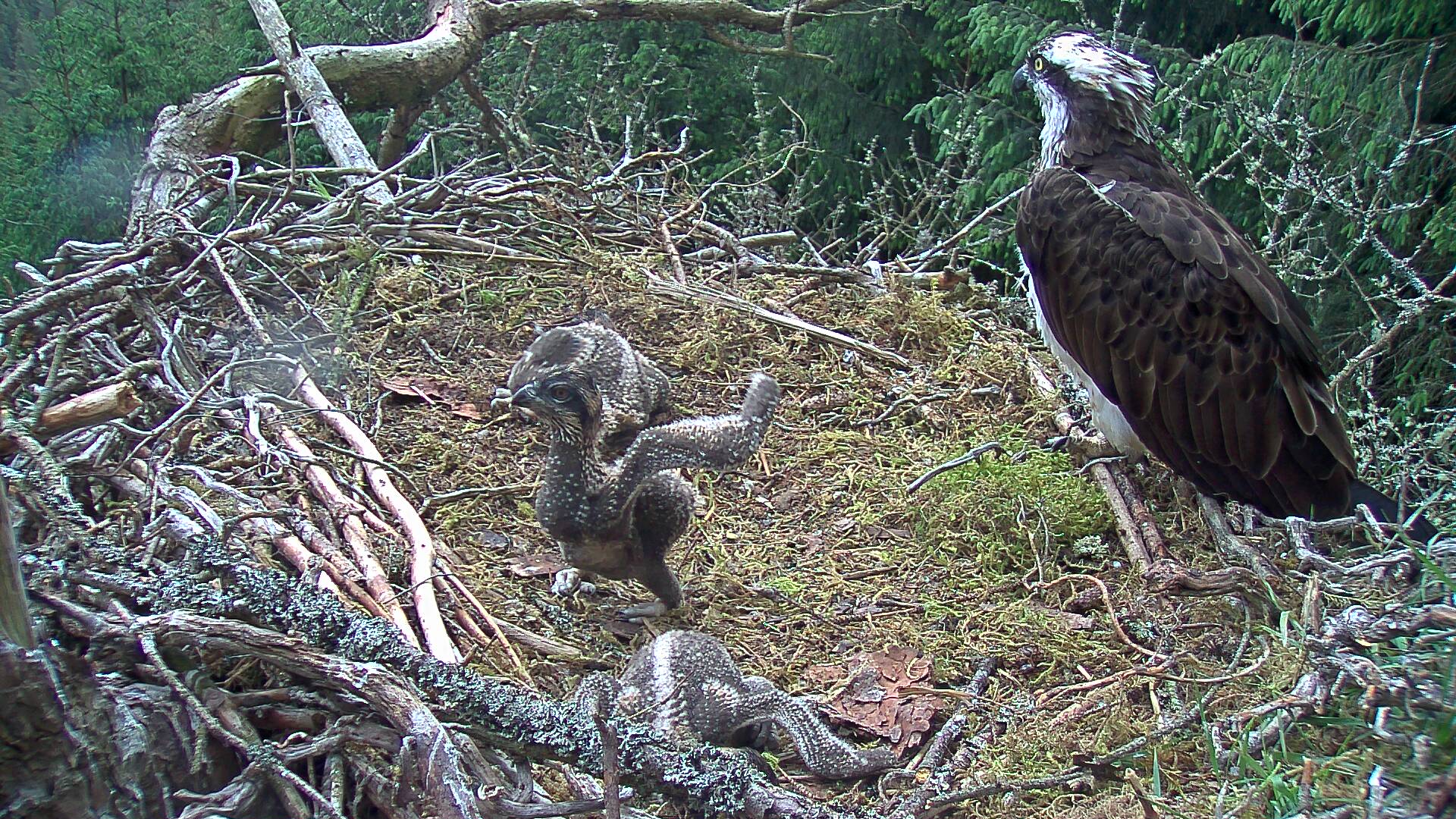 > A young chick hopping about in the nest

This week, at the main nest in Tweed Valley, we have seen some very good sized brown trout being brought in to the nest by the male, PW3, for his family. The three chicks are doing very well and are being fed so tenderly by Mrs O. It is encouraging to see that even the smallest chick is receiving good portions of food, as the meal is shared out. The youngest chick does seem to be a plucky little chap. Feeding time has resulted in the littlest one occasionally pushing forward to the middle position and doing a sort of cute hop to raise its little head to the same height as the other two, making sure it gets attention and food. 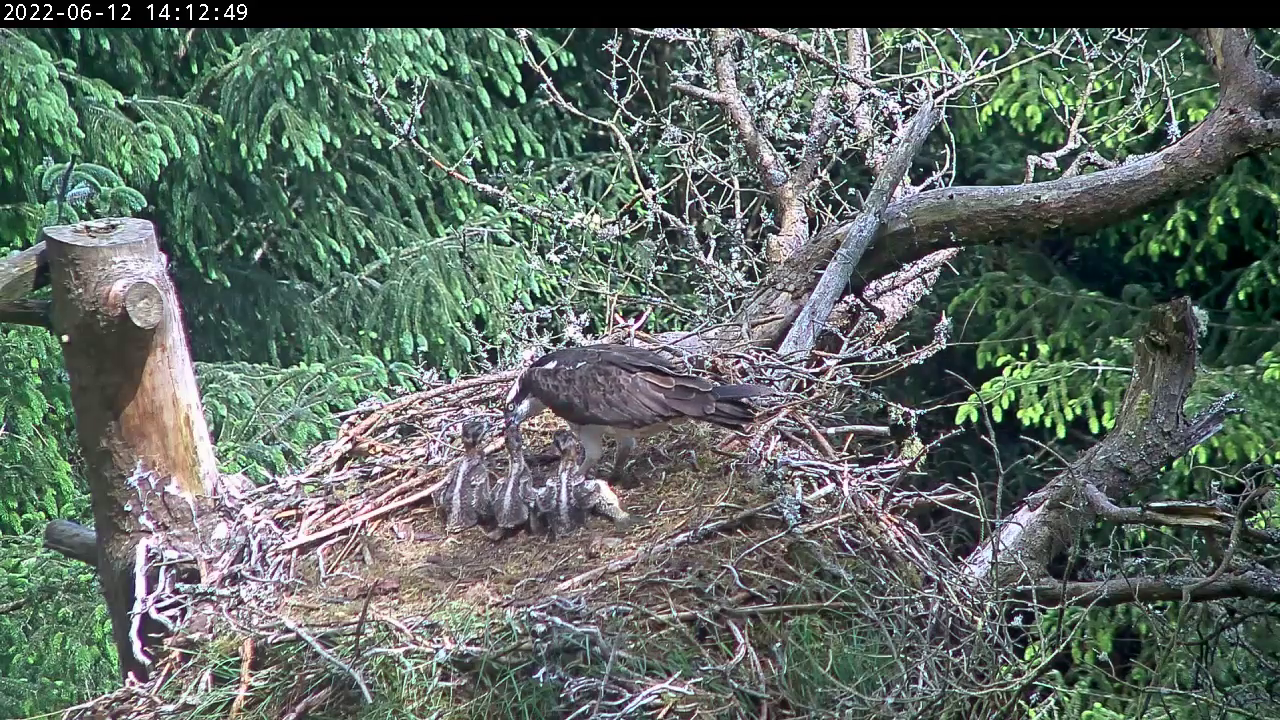 The size of fish being brought in and the fact that it's so fresh they are literally still flicking their tails is ensuring that this family are thriving. We can’t take anything for granted at this early stage though, as we have heard the sad news that both Kielder and Loch Arkaig have lost chicks during the past week. It's surprising how fast a situation can change - a spell of bad weather or a dip in food supplies can prove to be fatal. The vulnerability of the young ospreys is considerable. We hope we have a continued run of favourable weather to allow PW3 to keep up his good work hunting for his family and Mrs O to keep to her side of the relationship deal and keep the young safe and warm in the nest. 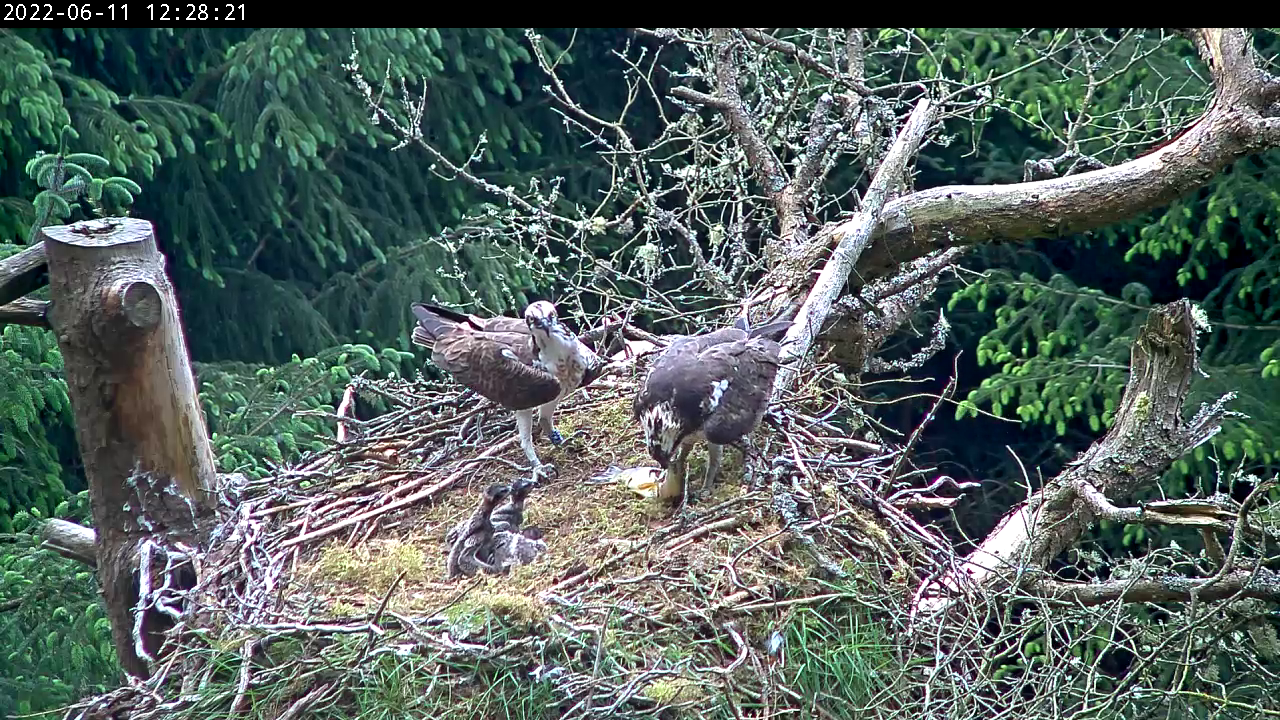 > Another great fish brought in by PW3

Last week's observation about the change in PW3's behaviour this year stepped up a level this week. Not only has he stayed nearer the nest more and not flown away instantly after a food delivery, but this week he actually tried to feed the chicks. The bulk of feeding time was done by Mrs O. But after the chicks were full, they lay down and a while later PW3 joined them in the nest while Mrs O was busying herself tidying sticks and moving them about. PW3 picked up the remaining fish and began to feed himself. As soon as the chicks realised that he was feeding, they got up again and went over to him, raising their heads and opening their beaks to beg for food. At this point, PW3 began to reach down and attempt to give the chicks food, He wasn’t particularly good at it and certainly needs to practice his technique, but it was a very touching fatherly moment and hopefully he will get to practice some more. This will certainly add to the bond between the family and was delightful to watch. 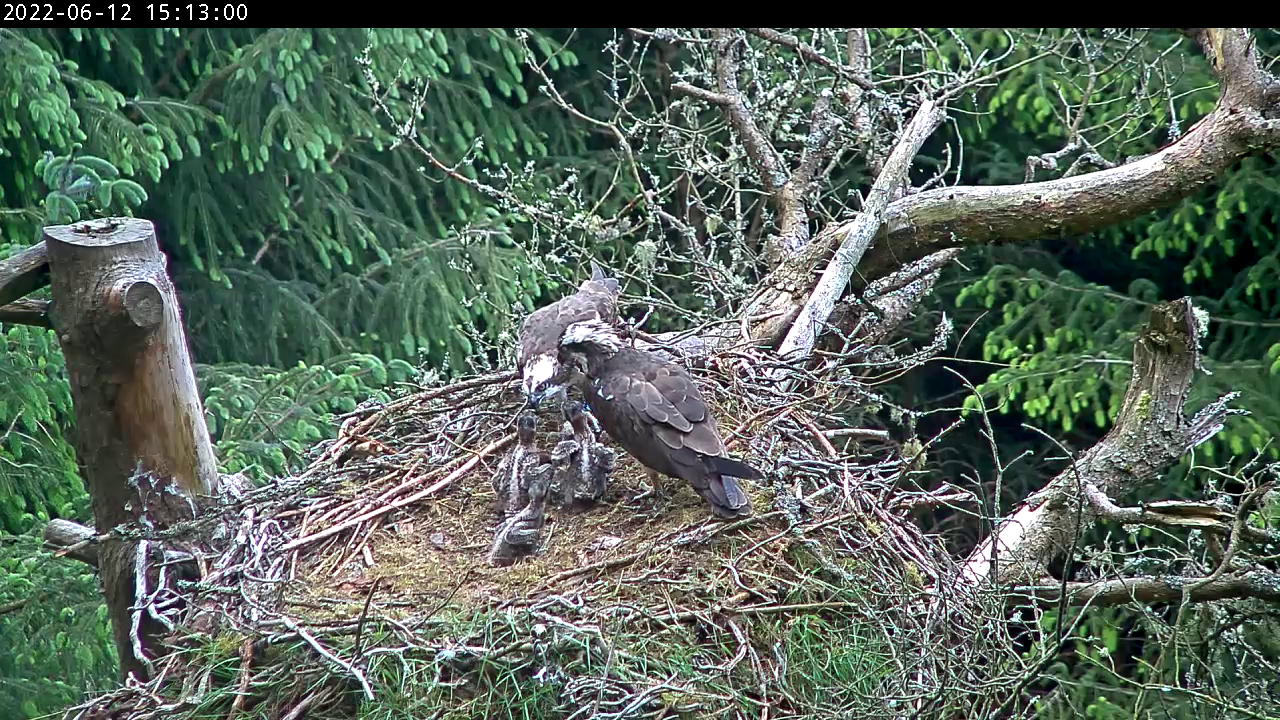 > PW3 feeds his brood for the first time

This morning when I collected the recorded footage from the nest, the young brood had just finished feeding. They were so full that they looked misshapen, their crops distended with food inside. This is a good sign that they are developing well and getting enough to grow stronger. Their grey down is slowly being replaced by feathers now too. 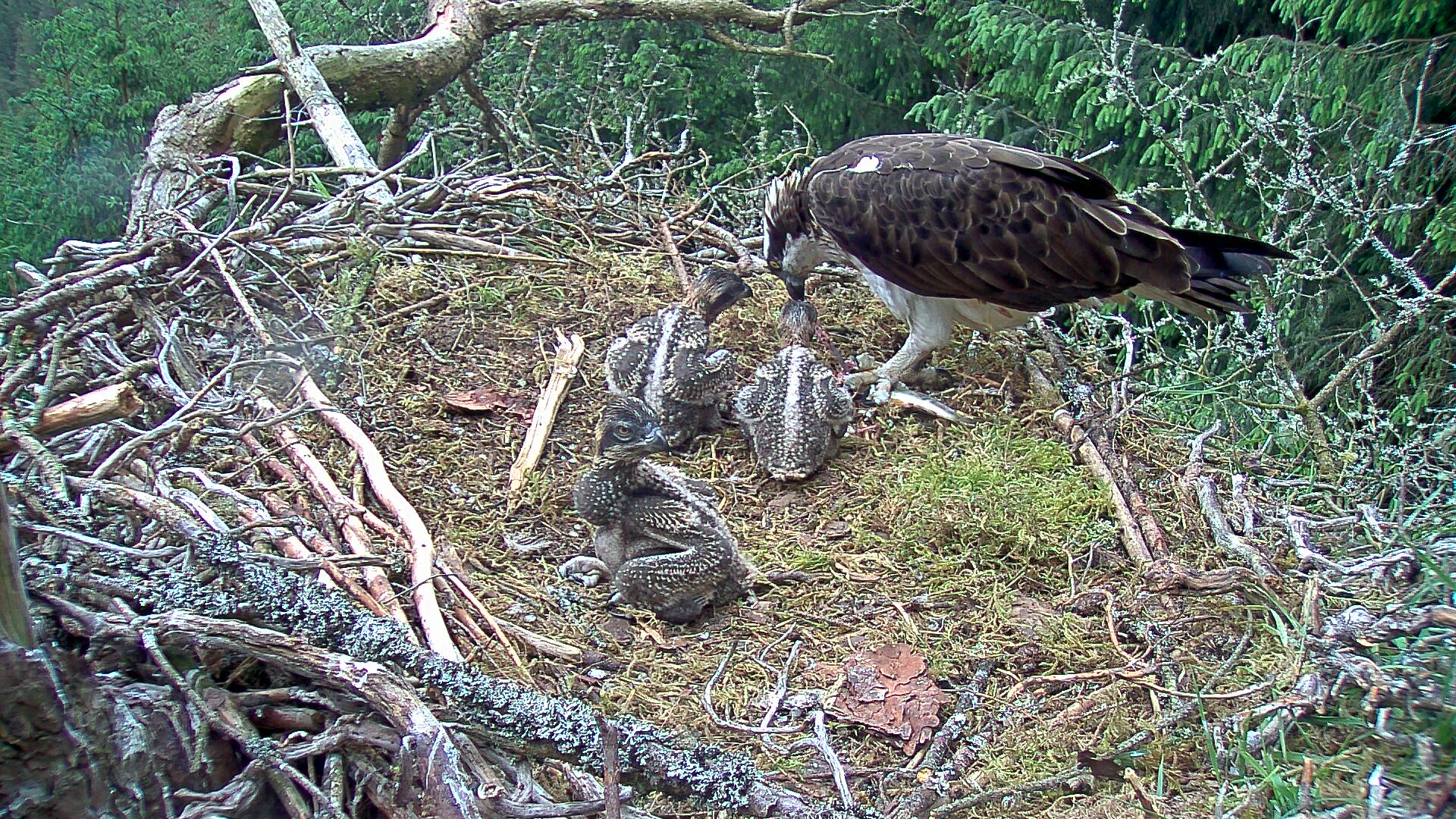 > Bulging crop on the well-fed chick near to the front

We have a camera on the back up nest but, unfortunately, its signal has faced disruption because it is in such a remote area. We rely on the images being beamed across a series of masts on the hillsides which was just fine in February, but unfortunately some trees have had a growth spurt and blocked the signal. However, we received a brief glimpse of footage when someone from the Forestry and Land technical team was able to intercept the image on his laptop and send it to us. The good news is that there are three chicks in the nest with their un-ringed mum. We are hoping that dad is the same bird from last year, FK0. The video footage showed some sibling rivalry as one of the chicks was giving a good bashing to the other. Hopefully that will resolve over time and they will do alright. We hope to have regular footage from this nest soon.

A little reminder about the Peebles Outdoor Film Festival this weekend. Find out more about the festival and book for our event at:

The full Festival programme can be found at: Peebles Outdoor Film Festival 2022