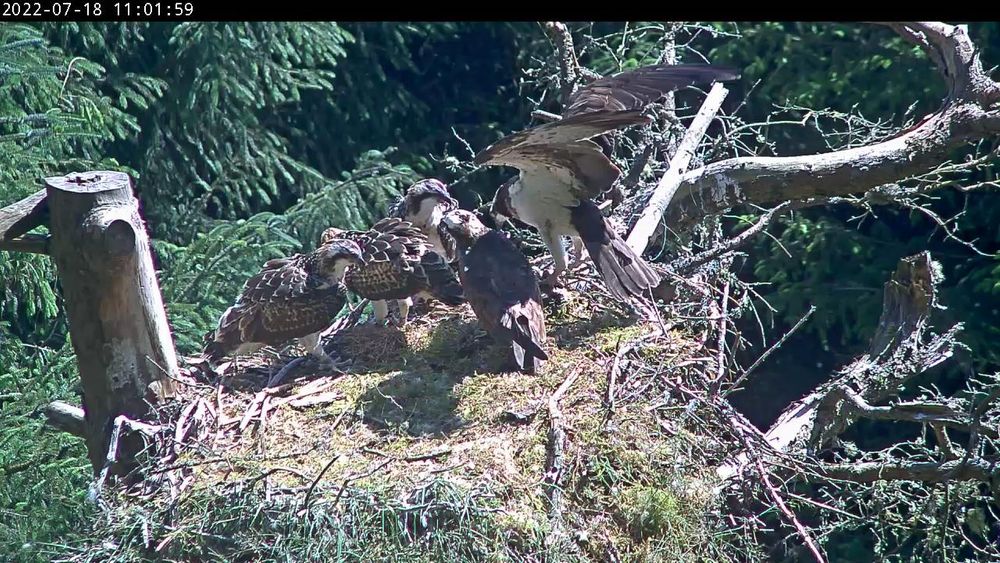 The whole family at home

All three chicks in the main osprey nest successfully fledged during the past week, each displaying varying degrees of confidence and skill.

The first witnessed flight was on 20 July. We couldn’t see the ring number but the young osprey was wing flapping and restless, hopping about the nest. After making it to the perch on the right-hand side of the nest to gain some height, and then a little further up the branch, he stretched his wings and was away. That was the start of progressively more and more wing flapping and short hops and jumps across the nest from the other two chicks, and over the next few days all three were missing from the nest at different times, taking their first short flights. 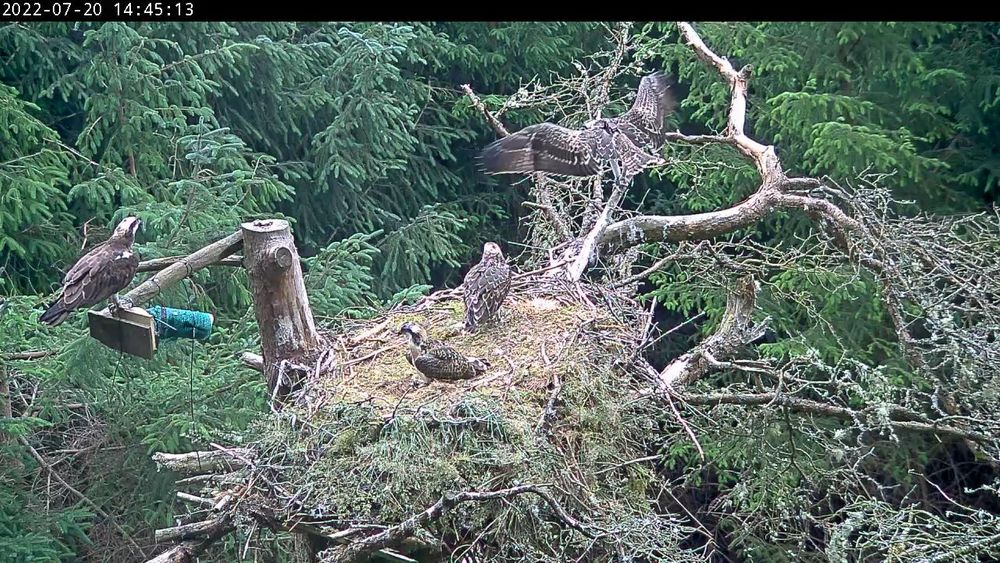 Feeding takes place at the nest and so it is good to see how the youngsters are doing when they return and wait for a delivery of fish for a family meal together. All of the young birds are practicing strengthening their muscles with vigorous wing flapping when they return.

On Friday 22 all three juveniles were at the nest with Mrs O. They were vocal and waiting for fish to be brought in, and much disappointed when PW3 arrived with a stick for the nest. After some continuous loud squawking from Mrs O, he didn’t stop long and flew off again. Soon after, Mrs O left the nest and so did chick 708, leaving the two other chicks alone in the nest.  Finally, Mrs O returned and 708 also returned in timely fashion for PW3 to return with a fish. Mrs O pounced upon it and began to feed herself before sharing it with her now adult sized brood. PW3 didn’t stop and left the family to feed. After feeding, Mrs O left the nest and 708 immediately followed her. 708 seems to be the most adventurous of the brood and most confident to fly to and from the nest. They are regularly left by themselves at the nest now and this is most likely to encourage them to fly themselves.

On 23 July, the day started with only two chicks at the nest alongside Mrs O. PW3 arrived without a fish. The two remaining chicks were wing flapping and it was quite a windy day. The absence of chick 706 was noticeable. Mrs O and PW3 took off leaving the two behind at the nest alone, and not long after, 707 also left the nest leaving 708 alone. 708 moved around and flew onto the right-hand perch but seemed reluctant to fly off. 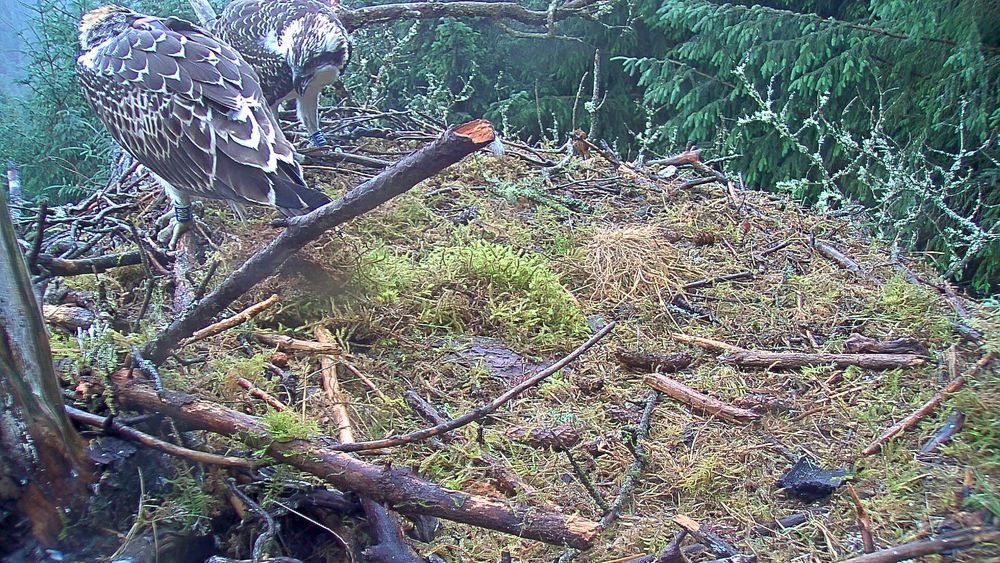 The family returned to the nest but 706 remained missing from the group with only 707 and 708 present for the rest of the day. On 24 July there was still no sign of 706 and by 25 July real concerns were beginning to be raised as he was still not seen at the nest when the camera was on. We checked the tracker data and satellite map and could see the mass of data around the nest and then a few clear spikes showing that 706 had travelled away from the site. The data showed movement, so we were reassured that he had not crash landed somewhere or was in danger. He had crossed the valley below the nest into trees on the other side, about 100m from the nest. Then later on 24 July, he had gone right over the top of the hill and was overlooking the River Tweed from there. Had he perhaps tried to follow his dad as he is frequently seen fishing the river along that stretch? 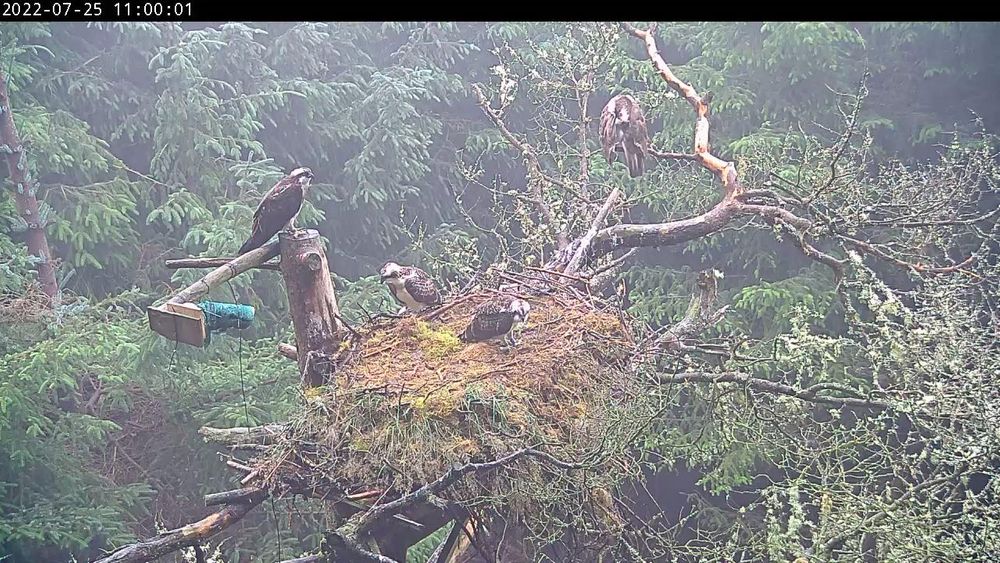 Somehow though he had not managed to return home and was away from the nest overnight. The next day on 25 July, the data showed that he had come back over the hill and had almost headed towards the nest but instead headed to the north of it and came to the end of a forest ride and stopped there. Another night away from the nest without feeding was beginning to cause more concern.

We had to wait until the morning of 26 July to check the data again which showed on the map that his position was in the same area of the forest. But the data showed a flight had taken place at 6am, travelling at 32 kph, but this had not updated onto the satellite map yet. A nail-biting morning then to wait for the main camera to come on to see if he had made that flight back to the nest site. Thankfully, when we finally got access to the camera we saw all three youngsters back at the nest, lined up waiting for parents to return. 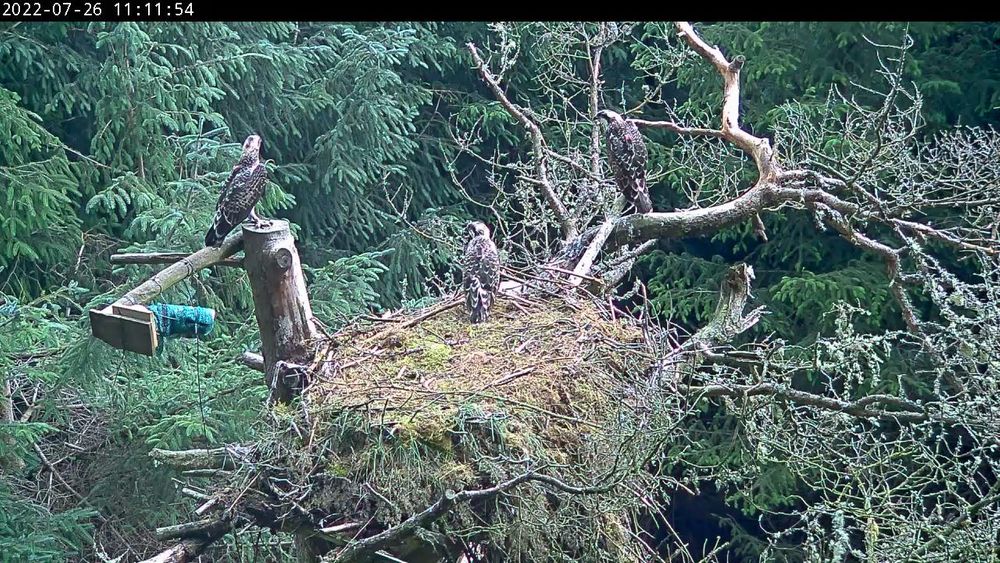 Lack of experience and a knock to his confidence perhaps had prevented him from returning for two days but surely hunger drove his courage to try to fly again and successfully return for breakfast. Every day from now on they will hone their flying skills and gain in strength but it is always tricky after the initial fledging and those wobbly first flights. Those huge wings can lift them further than they intend until they have learnt how to master their control of flight.

We will pick names for them next week from the suggestions that we have received.