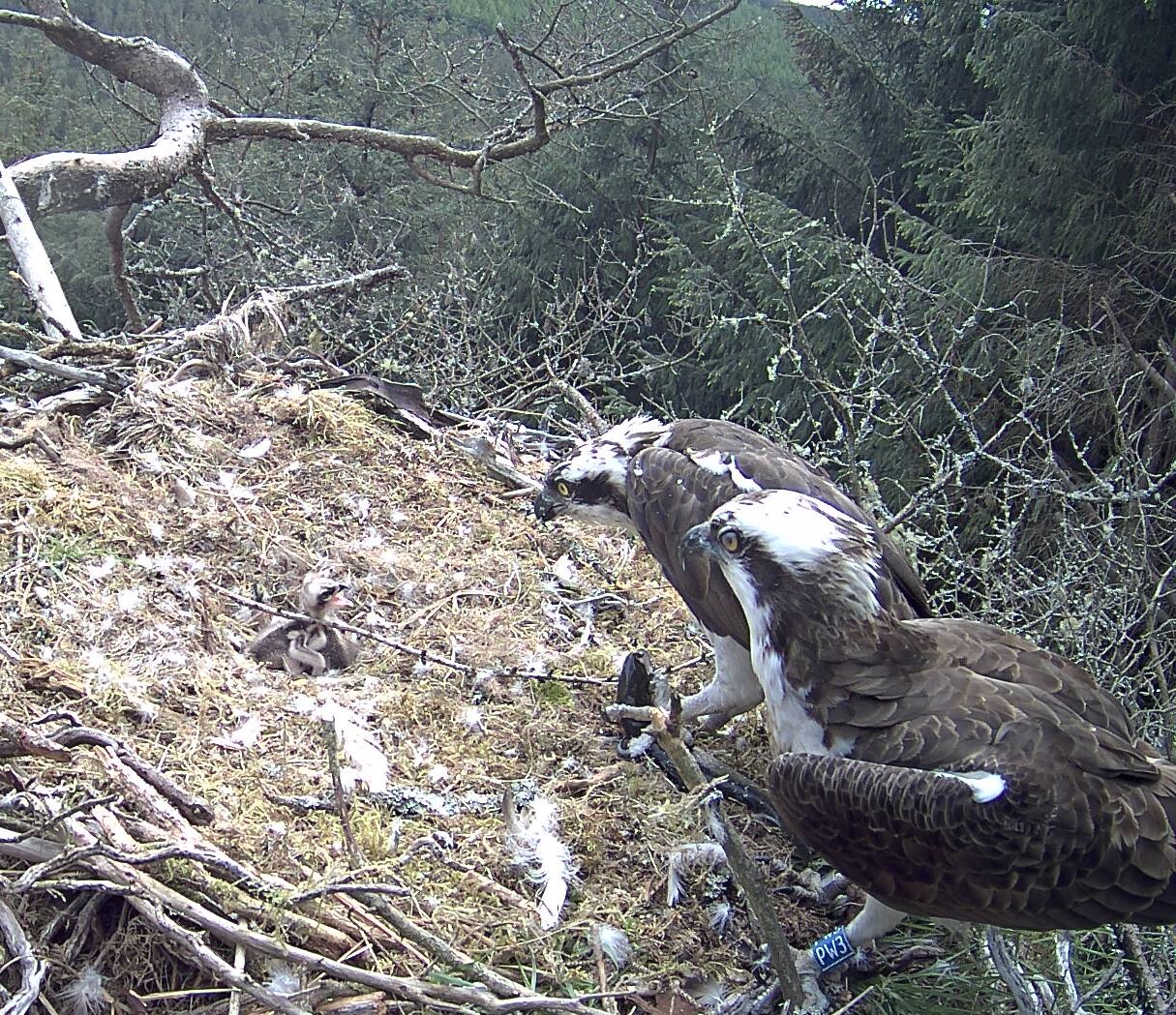 PW3 didn’t stop long, Mrs O took the fish from him and moved around the nest to position herself to feed the young ospreys and PW3 flew off. He was most likely watching his family from a distance, perched upon one of the lopped pine trees to the side of the nest. With her back to camera, Mrs O began to tear off morsels of fish to gently proffer to the little wobbly, outstretched heads, reaching up to her with beaks open, ready to take their first meal. It didn’t take much to fill such tiny bellies and so Mrs O was able to enjoy some fish for herself too. 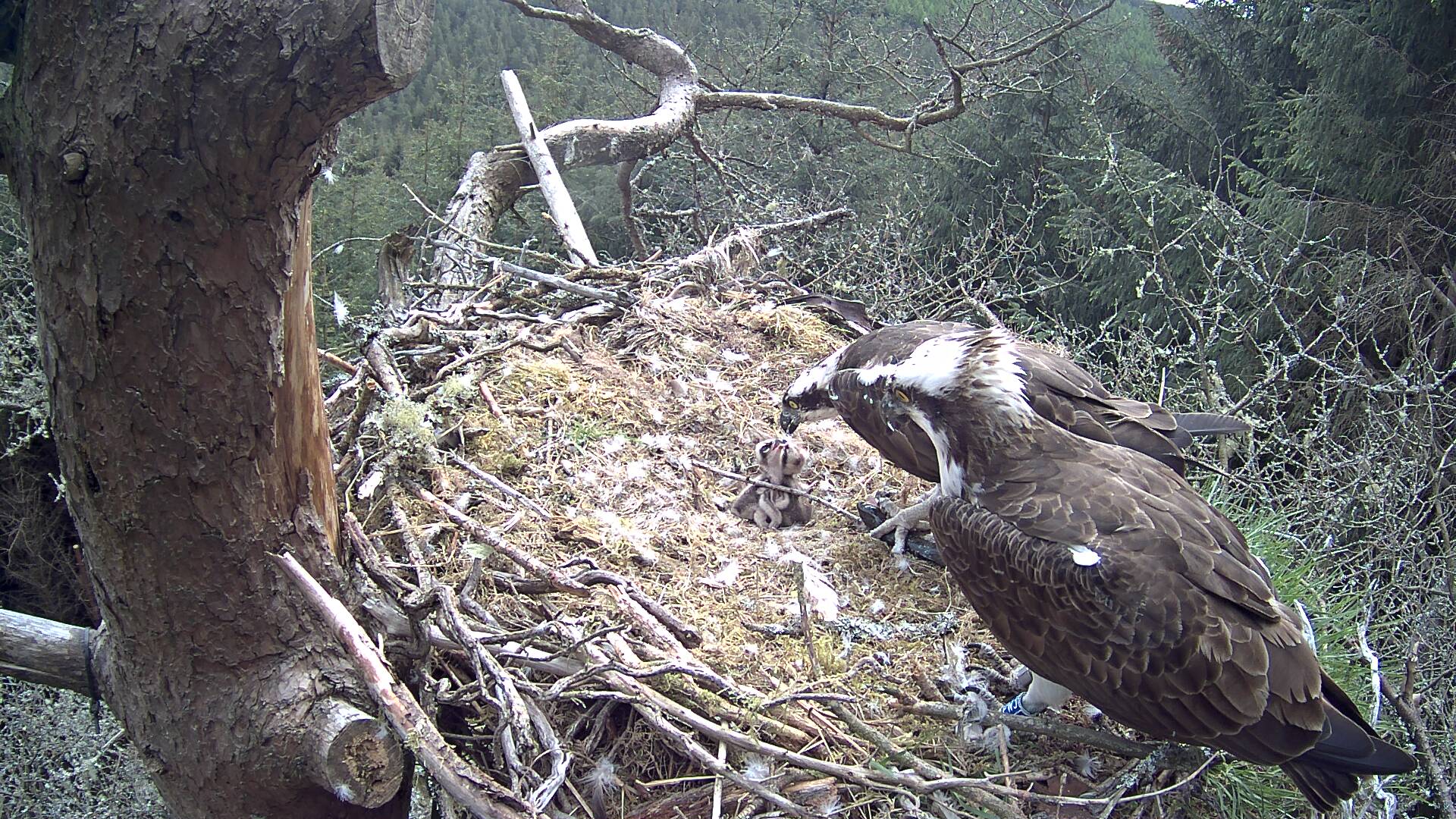 The young chicks soon got the hang of feeding and then it was time for a rest. Mrs O began preening and little white downy feathers were dislodged and could be seen floating down onto the sticks and drifting to the edges. The opportunity was not lost on a passing female chaffinch who stopped by and took a beakful of soft down to line her own nest. A brave little bird as I’m sure she would not be aware that they only eat fish. A slight movement from Mrs O in the nest above her sent her flying off in a hurry. 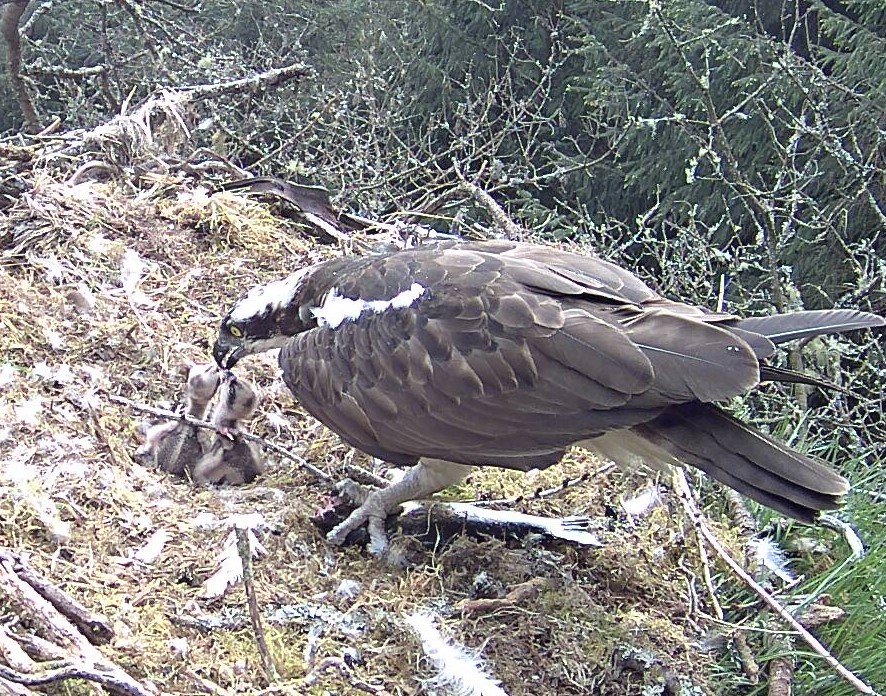 The change in weather this week is a great advantage to the family and will be helpful for PW3 hunting for fish. It also means that Mrs O can be a little more relaxed around shielding the newly hatched. The sun will provide some warmth for their little naked bodies, they do not have much protection at this point, just a light covering of down. They won't be able to regulate their own temperature until they have feathers. 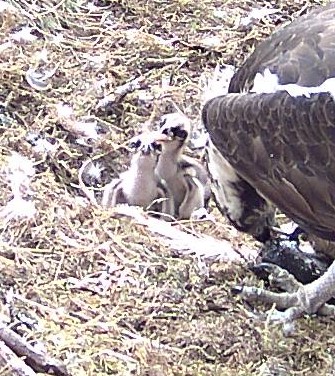 On 28 May the two chicks were beginning to feel hungry and began to reach up to Mrs O begging for food. There was none in the nest so Mrs O settled them both beneath her for a rest. They didn’t have to wait long - three minutes later, PW3 flew in with a fish for the family and Mrs O took it and began to feed them. He plays no part in feeding the chicks. While they are so young, his role is to hunt and provide fish for his partner and the chicks. Mrs O is barely away from the nest at all. We have only witnessed her gone for a couple of minutes, most likely for a quick comfort break before returning. So far these new parents seem to be doing a good job. We hope the weather remains kind and favourable to them to allow them to grow and develop strength over the coming days.