We have lift off!

We have lift off!

The first successful flights have been achieved by the main nest’s young ospreys this week. The young male was first to take flight, with his sisters following his lead over the next two days. 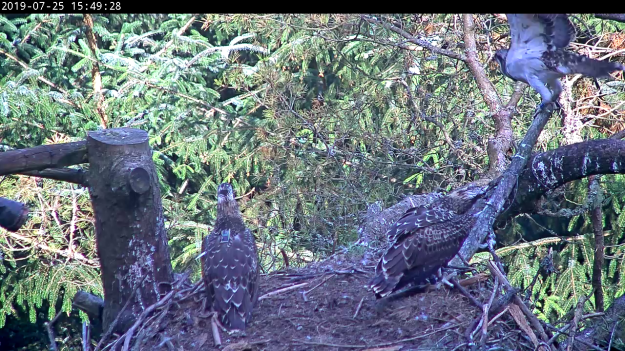 On a scorching 25 July - the hottest day of the year - the three young ospreys were on the nest without their parents. The male bird, 302, was wing stretching and flapping quite a lot. He used the branch leading from the right side of the nest to gain some elevation. The whole time he was looking about curiously, while below him on the nest platform, 301 was also trying out her flight muscles, hopping with short lifts from one side of the nest to the other, wings outstretched. The third youngster was less keen, keeping to the side, away from her siblings. 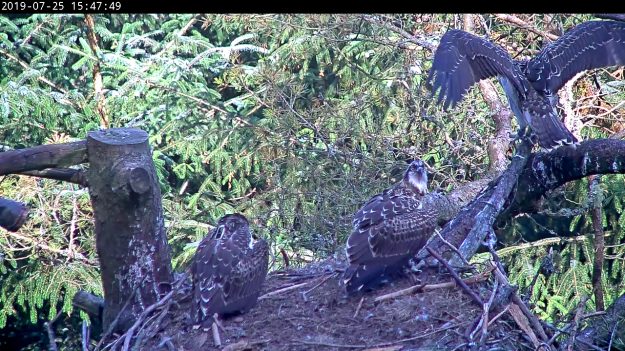 At 3:50pm on Thursday afternoon, 302 took a step higher up onto the branch and made a tentative wing stretch. This was followed by some open-winged test stretches, and some left-to-right head sweeps as he scanned the area. All of a sudden he was airborne, flying straight across the nest to the left. In a second, he was gone. 301 gazed skywards as though tracking his movements, but 303, not feeling brave, hunkered down into the nest. It seems she does not fancy her chances of a successful flight just yet. 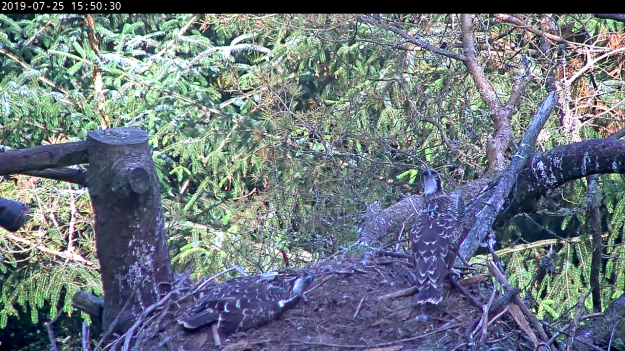 The sisters watch their brother fly above the nest. 303 hunkers down but 301 looks on

Shortly after 301’s take off, Mrs O swooped in to see her two daughters at the nest. She was alert and watchful; perhaps she too was watching her son’s first flight. 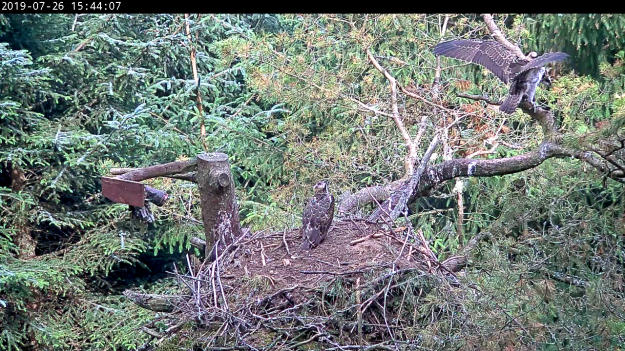 The following day revealed 303 copying her brothers strategy and using the right hand branch to gain elevation. There was some energetic wing flapping, but eventually she retreated back down to the nest.

Mrs O returned to the nest with a large mossy stick, which the two sisters inspected with intense curiosity. Flying attempts were on hold for the time being. Finally, on Saturday at 4pm, 301 took to the air for the fist time, leaving only 303 behind in the nest. By Sunday morning she too had joined the ranks of the fully-fledged and flighted Young Osprey Air Team. SS and Mrs O have done a wonderful job raising their brood this year and now the final stage of their work is almost done for the season. 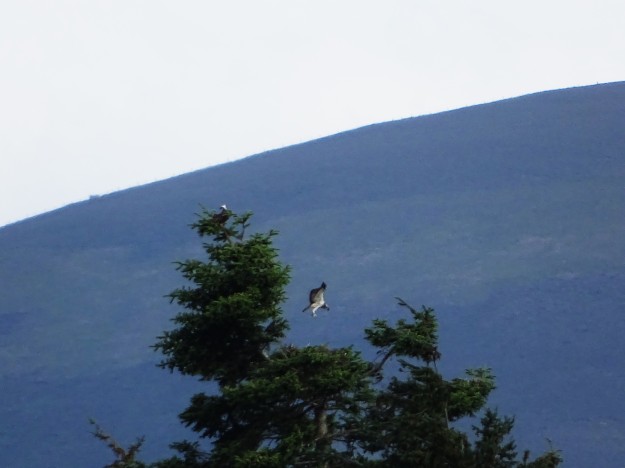 First liftoff for one of the new nest’s young ospreys. Photo by Stuart Blaik

We have more fantastic news! The new nest site where two chicks were ringed last week also has two successfully flying young ospreys. Their amazing first take-offs and soaring arcs above the nest were caught on camera by Stuart, our (very lucky!) volunteer, who was viewing the whole scene from his home. 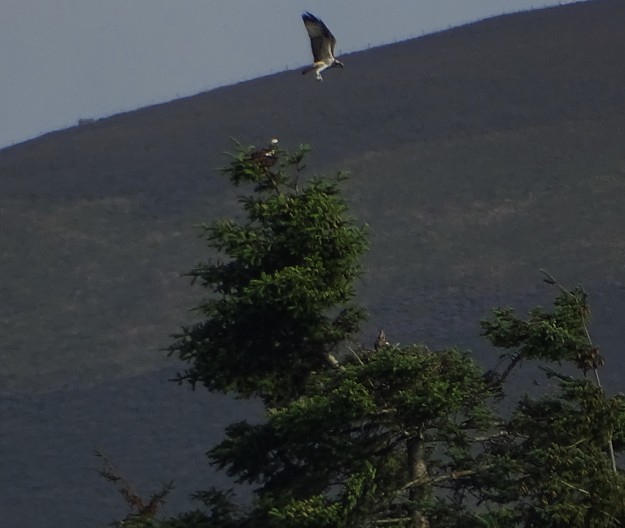 Mixed blessings for the season

In all, this season has been one of mixed blessings. There has been a few disappointments at some of the sites we monitor. Out of a total of 14 osprey nesting sites checked this year, only 7 sites were found to be successful. A total of 15 young ospreys have been raised and successfully fledged. At three sites, the adult birds were present but they failed to raise young. At two of the sites, the ospreys had moved and left the site altogether.

Three of the nest sites had three chicks per nest, two sites had two per nest and two sites raised single chicks. One of the sites which has also been consistently productive, with two chicks for the first time 4 years ago, and then three chicks per year for the past 6 years, only raised one chick this year. This leads us to believe there has been a change in one of the adult birds. The adult male from this site used to be a particularly feisty bird, which was not apparent at ringing time this year. Perhaps it is a new male bird, given that only one was chick raised and different behaviour observed.

The birds which moved from backup nest no 2 to a new site of their own making were successful in raising two chicks. Unfortunately, we don’t have a camera on the new nest, so we cannot confirm the identity of the parents.

Sadly, one of the failures was the site where the ospreys chose the spindly larch tree to nest in, as opposed to the artificial platform built specially for them. The nest was found to be in a sorry state of disrepair, possibly due to storm damage, and egg fragments were found below. Three adult birds were present at the site. Most alarming, though, was the discovery of many tyre tracks from unauthorised motorised trial bikes, which undoubtedly would cause disturbance. This has been reported to both the local police and the SSPCA, but illegal motorbike riding remains an ongoing problem within our forests.

This is the final week for name suggestions for the main nest’s young ospreys, two females and one male. Please send your suggestions to This email address is being protected from spambots. You need JavaScript enabled to view it.!

We will announce the names selected next week.

Take a look at the first flights from our terrific trio on this week’s highlights from the live camera feed. Click the image below to play.

This week’s highlights from the live feed – click to watch