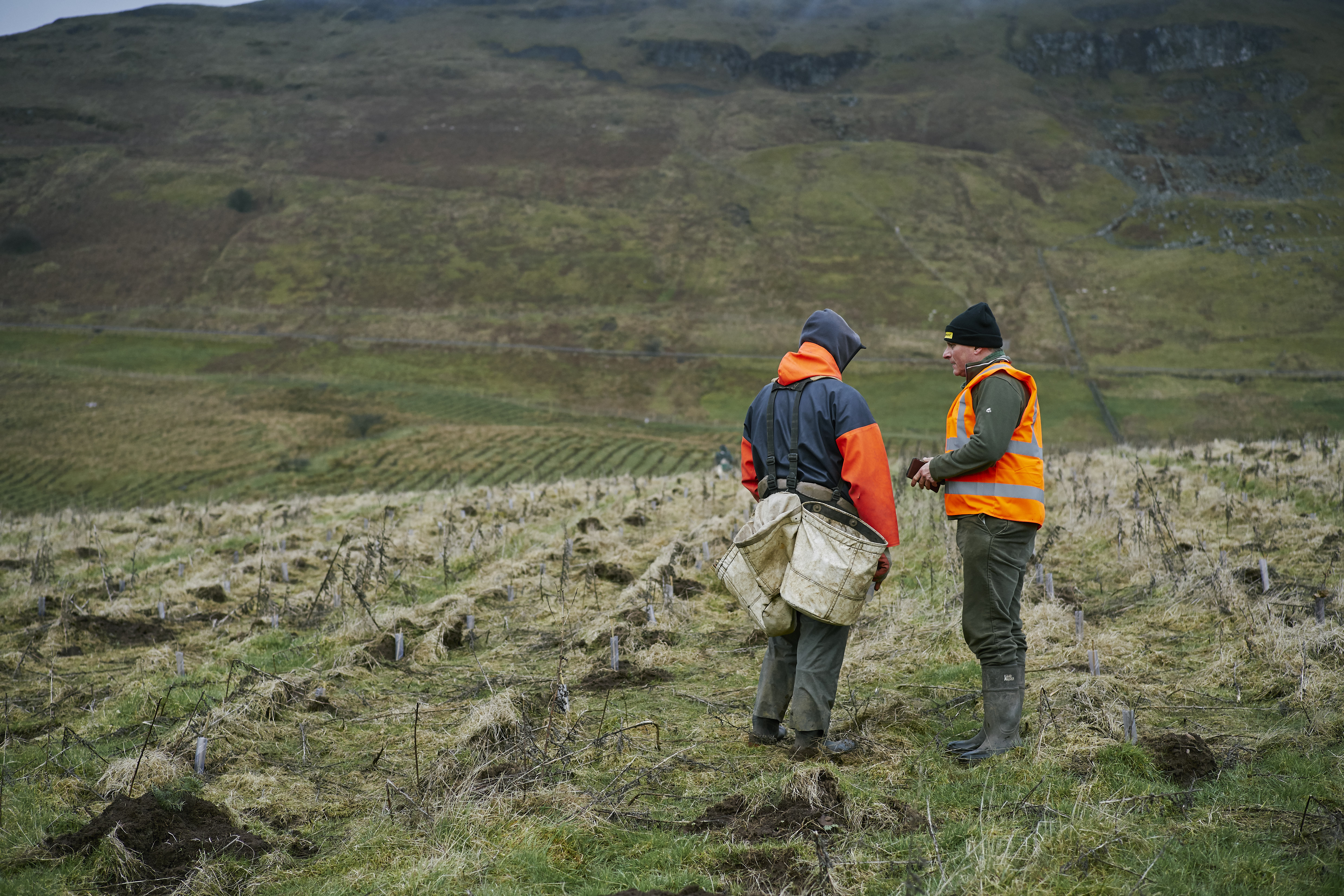 The Planning Support Team at Forestry and Land Scotland have a saying: “Everything happens somewhere." Mapping plays a huge role in all of the work that takes place in Scotland's forests, and without the technology behind GIS (Geographic Information Systems), their job would be a lot more difficult.

“Knowing the locations of our forests and land—and what’s on them—is extremely important, for the simplest of tasks such as directing visitors to forest walks, or more complex analysis of the local climate, soils and topography,” says Deborah Hide, GIS Data Manager for FLS. “Location also plays a huge role in operational planning, to inform financial and organisational decision making.”

Used by more than 600 foresters, rangers and planners in Forestry and Land Scotland, GIS is a vital technological tool, but not well known outside of the industries that use it. Today, this pioneering development is being celebrated as part of World GIS Day. 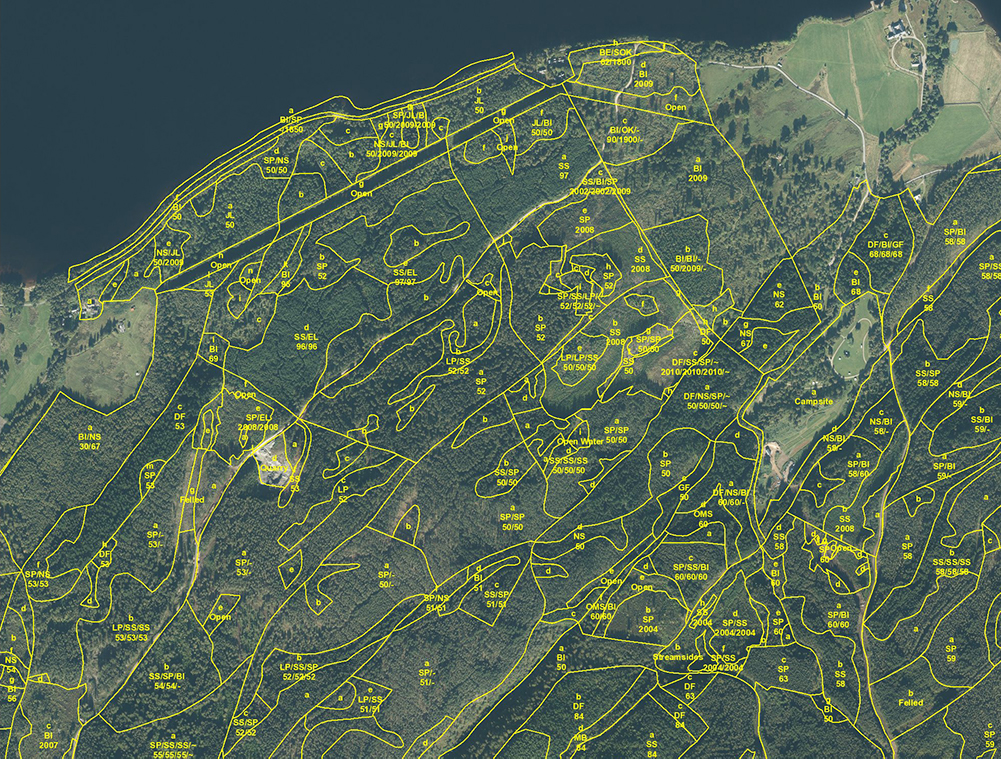 A GIS map produced by FLS showing different 'forest subcompartments' - each with their own unique attributes.

A relatively recent development in the forestry sector, GIS systems have roots that go all the way back to the pioneering early days of modern computing in the 1960s. The acronym ‘GIS’ describes a range of complementary software and technology, all working in tandem.

The website of ESRI, the organisation who provide GIS systems to many of the UK’s business sectors, defines GIS as: “a framework for gathering, managing, and analyzing data.” Founded in 1969, ESRI were the first company to look into the commercial and industrial uses of GIS. Their first commercial GIS product was launched in 1981, and since then, their systems have continued to develop and evolve.

A GIS system integrates various types of data, including spatial location, to turn it into information-rich visualisations using mapping technology. ​In FLS, these interactive graphics give foresters deeper insight into the data patterns, relationships, and situations which inform their decisions and planning.

Most data has a geographic component, and GIS data can include imagery, such as aerial surveys; features and plans for new sites, buildings or areas of interest. Basemaps display location and topography, while numerical and statistical data contained in spreadsheets and tables can be linked to specific symbols and fields on the map.

The first GIS system was developed in the early 1960s as a theoretical model in academic circles. The pioneers of GIS worked on early computers, which at the time were often the size of a room - a world away from today’s handheld technology.

Prior to the development of GIS, a wide range of analogue processes, developed over many years by geographers, were used to build a picture of a land area and the data describing it. In 1963, Michael Goodchild, a Canadian expert in the field, consolidated these theories into a working model and began thinking about ways to visualise and clarify this data using computers.

For decades, our organisation used paper maps, painstakingly tracing out the boundaries of the forests."
- Deborah Hide, GIS Data Manager at FLS

The world’s first GIS system was launched in Canada, also in 1963, via the National Centre for Geographic Information and Analysis. Led by Roger Tomlinson, the system the NCGIA produced was used to create an inventory of Canada’s natural resources. The reaction to this development from geographers and professionals was enthusiastic, and before long, more GIS systems were in development.

In 1964 a researcher named Howard Fisher developed an even more advanced model, one of the first computer mapping software packages, known as SYMAP. Fisher would go on to found the Harvard Laboratory for Computer Graphics and Spatial Mapping, undertaking sophisticated research into spatial analysis and visualisation alongside a dedicated team of geographers, planners, programmers, and experts from a wide range of fields.

The processes for automation, visualisation and data storage developed by Tomlinson and Fisher are still the guiding principles by which GIS systems function today.

Using GIS in the forest

“For decades, our organisation used paper maps, painstakingly tracing out the boundaries of the forests, and drawing designs for future felling and planting,” Deborah Hide explains. “We now use a custom-built web-mapping platform to manage all of FLS’s spatial data.”

This comprehensive system means all FLS data can now be mapped digitally. In this format, FLS staff can more efficiently undertake data analysis, create new maps, and share all that information with other staff and the public. It also means FLS data can be shared to other platforms, such as mobile apps. “Detailed information about the forests is now available to staff on their phones, and they can also quickly record data and photos in the field,” says Hide.

GIS is the nervous system of the planet.”
- ESRI website

ESRI’s website describes GIS as “a platform relevant to almost every human endeavor—a nervous system of the planet.” GIS can be used to analyse flux in populations of animals, loss of natural habitats, and levels of pollution, making it an increasingly important tool for anyone involved in looking after precious natural resources. To make a difference in all these fields, the efficiency of GIS lies in communicating complex information through the common language of mapping.

GIS and the climate emergency

Even the biggest commercial mapping companies use GIS. Google Maps uses GIS technology along with proprietary methods, and can be used to display information on a Google Maps template using GIS data. GIS technology is efficient, extremely compatible, and capable of presenting data in almost any way imaginable.

For FLS foresters, the introduction of GIS capabilities cut the time staff spent drawing maps from scratch by half, and enables them to update out of date maps up to 90% faster.

Foresters using GIS can estimate an area’s income from timber sales in minutes, rather up to eighteen man-months. This means improved planning capacity, drastically improved efficiency, and as a result, less waste, travel and fewer emissions, as Deborah Hide confirms: “Recent analysis work has been looking at future species selection, deer management, tree health, renewables land use, squirrel surveys and more, as well as investigating new and engaging ways to share this data with other staff and the public at large.”

As we face the climate emergency head on, GIS will continue to play a vital role.

Let’s hear it for GIS!

Find out more about GIS