A fitting tribute to a famous osprey

A fitting tribute to a famous osprey

The Tweed Valley Osprey Project volunteers and staff from Forestry and Land Scotland held a celebratory get together for the first time since the pandemic began, on Friday 17 June. The reason for the celebration was the unveiling of a beautiful painting of osprey White Leg SS in the Glentress Wild Watch Room. This was painted by Patrick Corley-Jackson in 2019 and he has very kindly donated it to the Tweed Valley Osprey Project. The painting is a tribute to White Leg SS, who first appeared at the main nest in Tweed Valley as a five year old in 2004. He returned annually with his un-ringed partner until she died in 2014. After a couple of unsettled years, he then partnered with Mrs O. During his 20 year lifetime, he raised 32 chicks and was the star of our live-streamed camera.

Of all the chicks that he sired, we know of only two that have returned and are successfully breeding. One is a female who has nested in Ayrshire since she was four years old. The other is a male who began to breed after settling with a 25 year old female in Stirlingshire. In 2020, SS failed to return, but it is lovely to think that his legacy continues and we now have a lasting reminder of him in the Wild Watch Room.

At the main nest this season, Mrs O and her partner PW3 are doing really well as a little family. The three chicks are growing fast. Chick number three is still a bit smaller than the other two and is not as smart when it comes to feeding times, often to be seen looking in the wrong direction while the other two get fed by Mrs O. The little one even tried begging for food from his dad while the other two were fed by mum. Not a great tactic, as mum had the food and his dad had nothing to give. PW3 (dad) flew off in the end, so the chick toddled over to join the line with the other two, finally feeding from the back of the queue. Not that it mattered - the chick’s little crop was bulging with food after dinner. So, although last in line, there was still enough food for all three to be full after a meal. 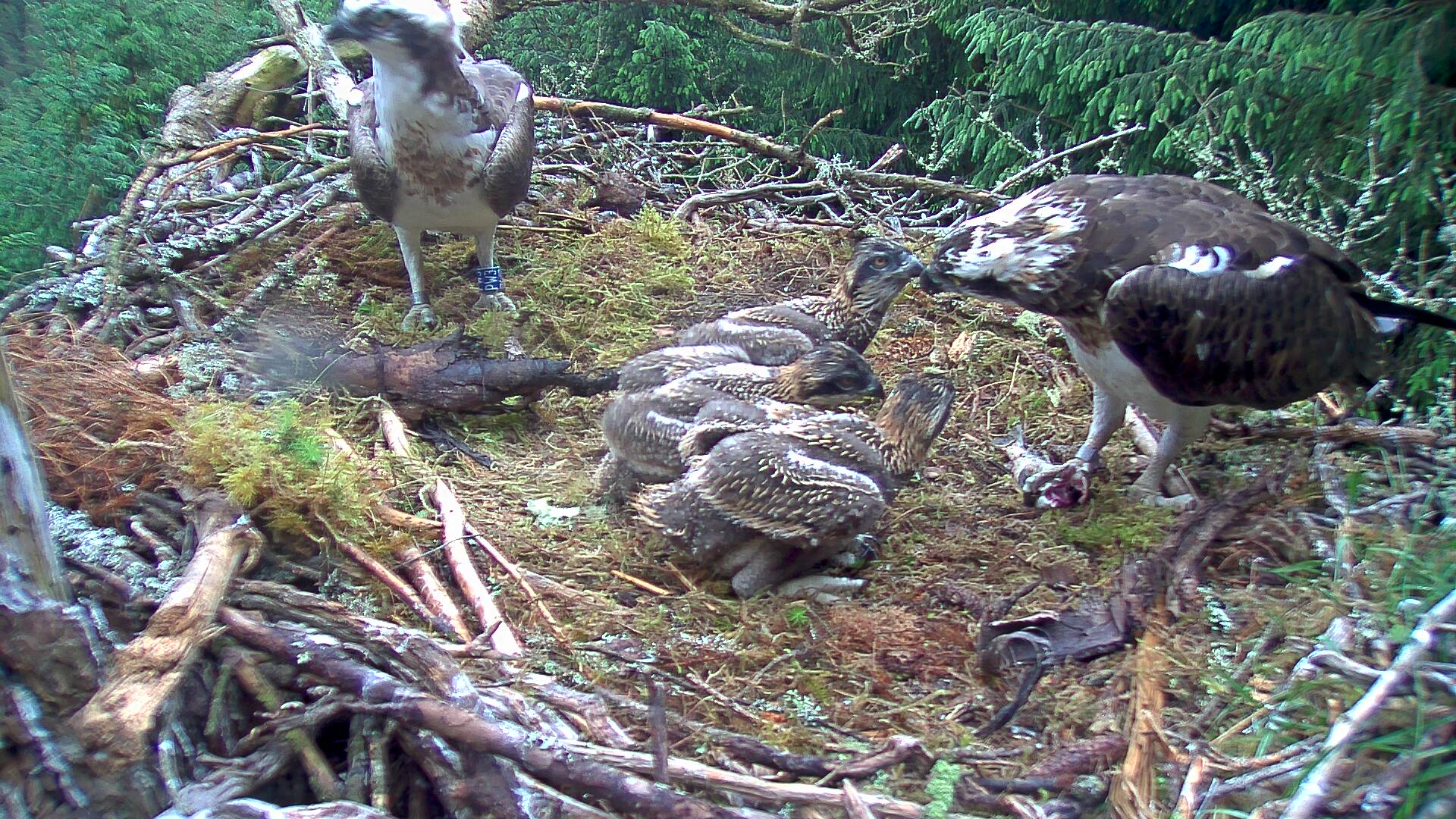 > PW3 brought in some bark

The chicks grow at such a fast rate. Their heads are now white with ginger at the back and the characteristic brown eye-stripe is prominent on their faces. Their bodies are dark grey and downy, but the true feathers of brown with gold covered tips have begun to come through on their upper body and wings this week. 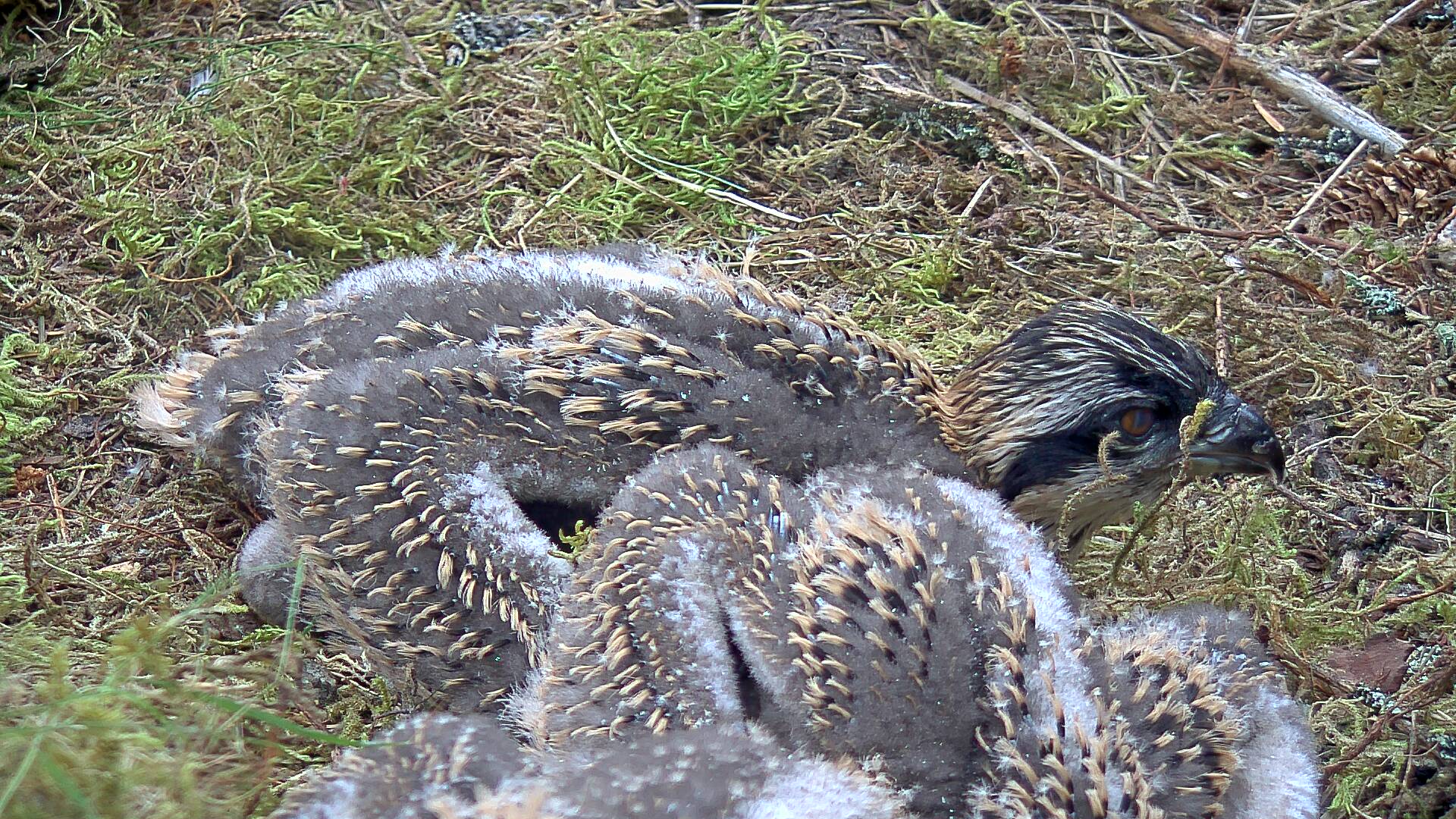 > Gold tips showing on the ends of brown feathers

They can be quite active around the nest at times and there is always a danger of them getting too close to the edge. However, the experienced Mrs O is often seen tidying the nest and moving sticks to the outer edges, which effectively keeps the little ones from falling. Fresh moss, sticks and the occasional decoration of pine cones are brought in by PW3 when he is not delivering fish to them.

We launched the new Tweed Valley Osprey Trail map at the weekend and this is now available for free from the Wild Watch Room at Glentress. With patience there is a chance of seeing passing osprey as they hunt over the river or lochs at one of the seven marked 'hot spots' suggested to visit.