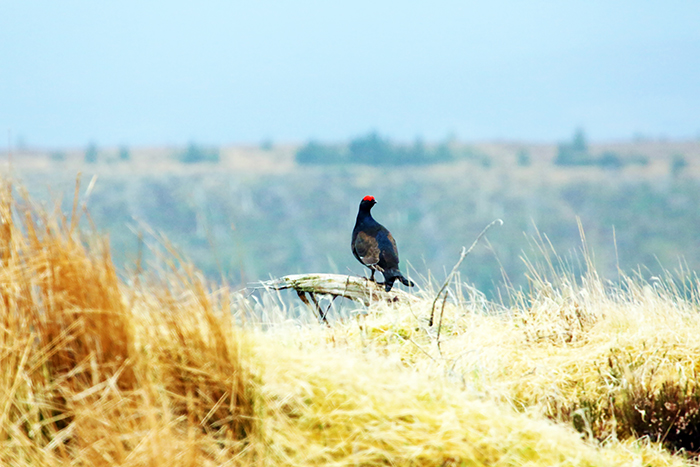 The photo above, taken last week by one of our rangers in the North Highlands, shows a black grouse, with its unmistakable postbox-red crest and blue-black feathers. The ‘lekking’ season is when black grouse breed, and a few of our destinations have been affected, with roadworks in Galloway Forest Park delayed in order to give the grouse population room to manoeuvre. “Not wanting to get in the way of love, we have decided to keep the forest drive closed for a few weeks,” reports ranger Lucy Hadley, who is on the lookout for these rarely-spotted birds in her district.

Sadly, the black grouse population is the fastest-declining in the UK. As an endangered species, we want to do everything we can to support the native breeding population. The larger cousin of the black grouse, the capercaillie, is near-extinct in Scotland, and we don’t want to see that happening to the black grouse.

To throw some more light on the mating habits, characteristics and best places to spot black grouse, we spoke to Environment Forester and bird expert Gareth Ventress. Read what he has to say below, and find out all about the mysterious and dramatic lekking display.

The ‘Lek’ - a battle for supremacy

Black grouse can be seen throughout the year but are at their most flamboyant and noticeable during the lek, when males visit a spot as a group, to display, in the hope of mating. The lek generally begins to heat up in early April, raising to its peak around early to mid-May when the females, known as Greyhens, decide to grace the lek with their presence to select their mate. 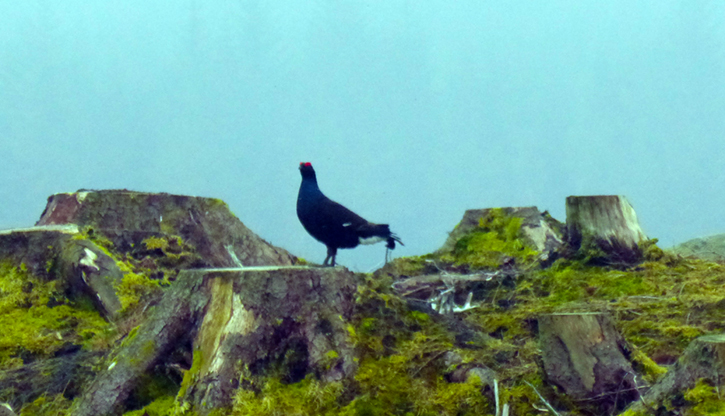 A black cock surveys the landscape in search of a partner or a rival. Photo: G Ventress

During the lek the male black grouse, known as black cock, display their vitality by displaying against each other. They show of their tail fans, and go through a fairly ritualised series of dance moves whilst issuing a beautiful soft bubbling call, punctuated by a harsh ‘kweek’ sound, often emitted during a wing-fluttering jump.

This dance off often turns violent, with cock birds pecking and kicking at each other as the lek reaches its peak. Some of the birds begin to look a little bedraggled, with feathers missing from around their head and necks and ragged wattles above their eyes. It’s all worthwhile for the fittest cocks though, because by asserting their dominance, multiple females may decide to mate with them, and they can assure their genes are passed onto the next generation. As for the losers, there is always next spring. Perhaps next time the clocks go forward they will be the fittest cock on the block!

Where to see black grouse

Black grouse lek throughout Galloway Forest Park, with leks often just a few hundred meters off some forest roads - and occasionally on the road itself. 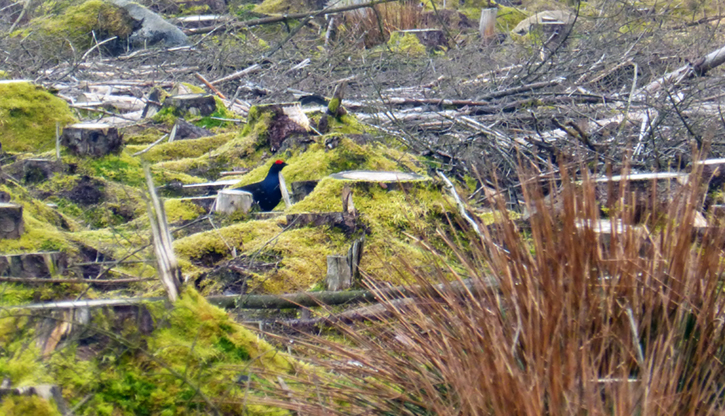 Rare, but with a distinctive appearance, black grouse are relatively easy to spot.
Photo: G. Ventress

Black grouse are known as a woodland edge species, preferring the woodland fringe habitats as the plantation transitions into open moorland. In Galloway we are working to improve this habitat through forest restructuring by creating a more natural woodland fringe of low density broadleaved trees and open space, and restoring important nesting and chick rearing habitats like blanket bogs.

We also protect the lek sites from disturbance during the most sensitive time of the year through implementing large buffer zones around each lek, where we restrict any operational forestry or civil engineering works to allow the birds to display and mate in peace.