Black Grouse
Back to
Wildlife 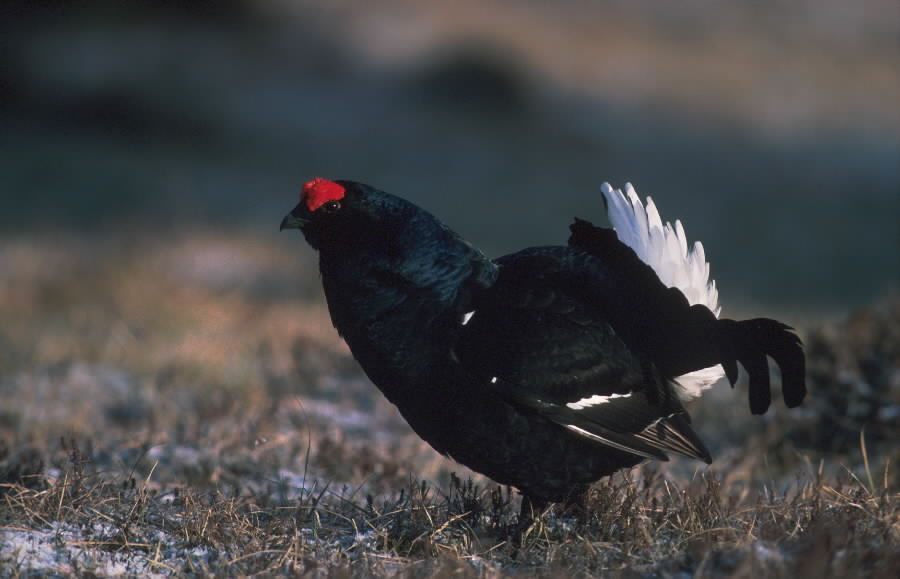 With its postbox-red ‘eyebrows’, blue-black feathers and distinctive cackling cry, the male black grouse is one of nature’s eye-catchers. At traditional display sites or leks, the flamboyant males strut, posture and fight in front of the females, their lyre-shaped tails raised in a fan of snow-white feathers.

Meanwhile the female, called a greyhen, quietly gets on with laying the eggs and raising the chicks, her grey-brown plumage camouflaged in the heather.

Sadly the black grouse is the fastest declining bird in the UK. It’s on the Red List of most endangered species, and many fear that it’s following its larger cousin the capercaillie towards near-extinction. Conservation measures are helping in some areas, with positive action to improve black grouse habitat and reduce threats.

Adults graze on the shoots and buds of larch, birch and heather as well as the berries of hawthorn, rowan and blaeberry. Young chicks feed on insects.

All year round. Try to avoid April - July (breeding and nesting) and follow the code of conduct at all times.

You might accidentally flush black grouse and see them taking off in alarm with fast, regular wingbeats. The white wing stripe is clearly visible in flight.

Good places are Glenmore Forest Park within the Cairngorm National Park, and Galloway Forest Park in the south west. You could also see them in other upland areas across Scotland and Wales.

Young birds are often killed when they fly into tall deer fences, so we make our fences highly visible with diagonal and upright batons, or brightly coloured netting. If you see a marked fence there’s a good chance that black grouse and capercaillie may be nearby.