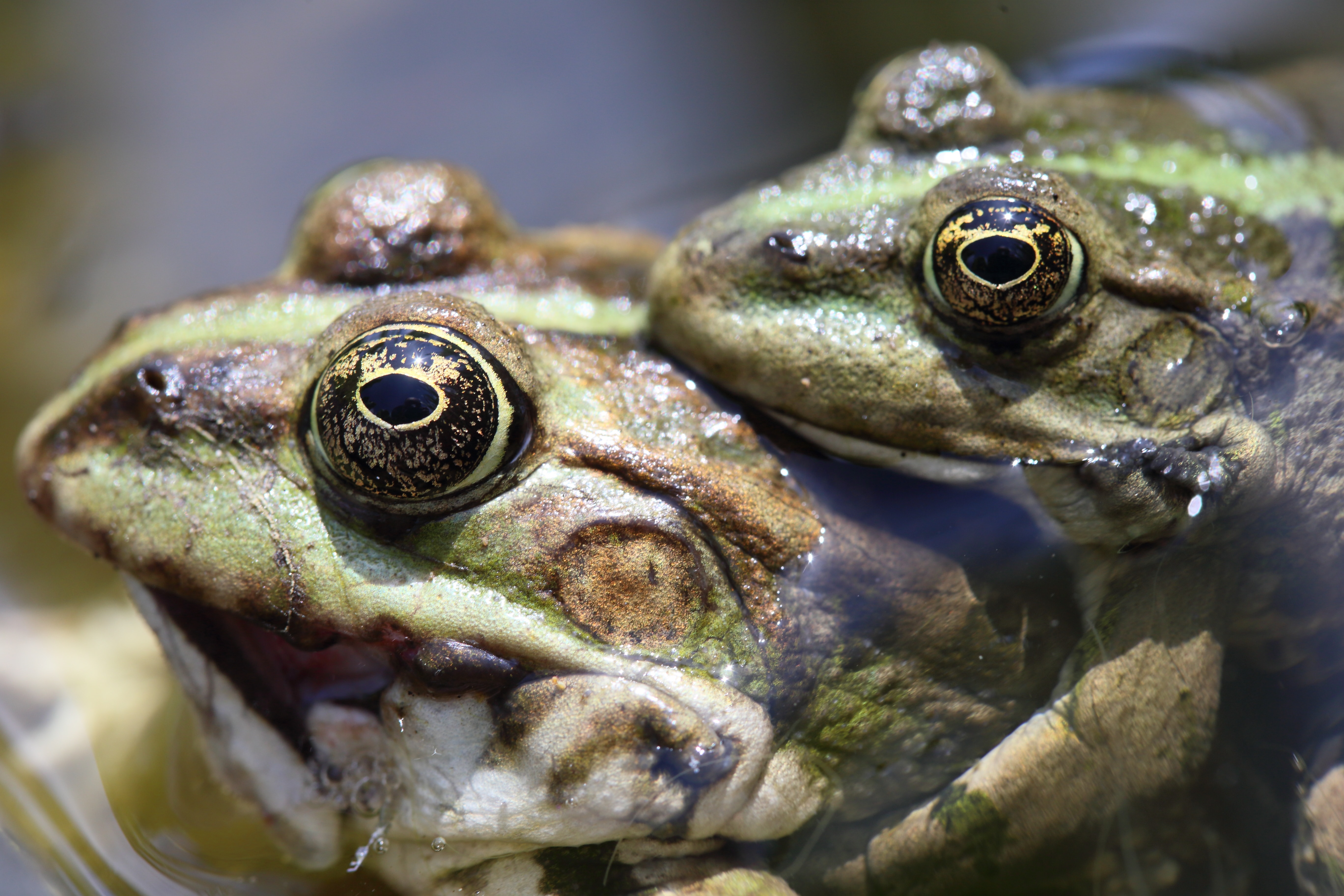 In December, the Forestry and Land Scotland team at Glentress in Tweed Valley Forest Park were ably assisted by volunteers from the Borders Forest Trust and the Scottish Borders Council as they tackled the daunting task of clearing the drained wildlife and biodiversity pond outside the Gateway building.

The pond, originally created as a home for a diverse range of wildlife from dragonflies to ducks and frogs, was overdue for a clean and a re-design, as the wildlife who had made it their home had been absent for some time.

Our plucky volunteers proved themselves more than equal to the task over several days of muddy graft. However, while painstakingly deconstructing and rebuilding the pond, they came across some unexpected guests... 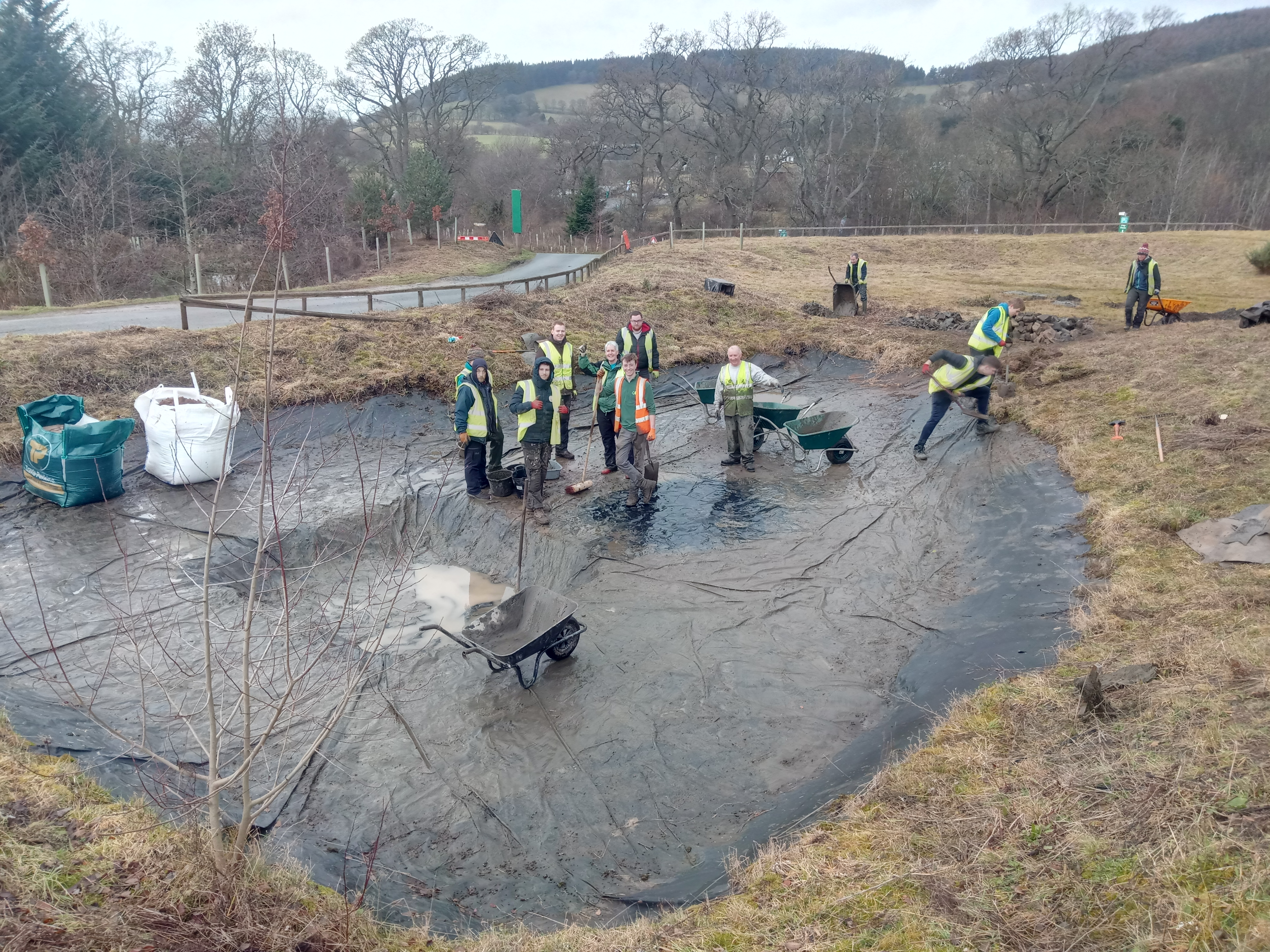 Volunteers assemble in the pond...

Eve, the FLS Environment Ranger looking after the site, describes the ambitious overhaul: "Undaunted by the horrendous weather forecast and equipped with waterproofs, high-vis and gloves, the group set to, removing stones and mud from the pond and dismantling the island in its centre. The plan was to lay down a new pond liner, placed on a buffering layer of sand, before the pond was refilled."

The original stones placed in the pond were lifted and stacked nearby. "Mud, water and rocks were removed from the sump and, in a relay system of wheelbarrows and buckets, taken off site," Eve continues. "Then the shout went up: 'Help! There are frogs! Lots of them!" It turned out the pond was less uninhabited than had been assumed. 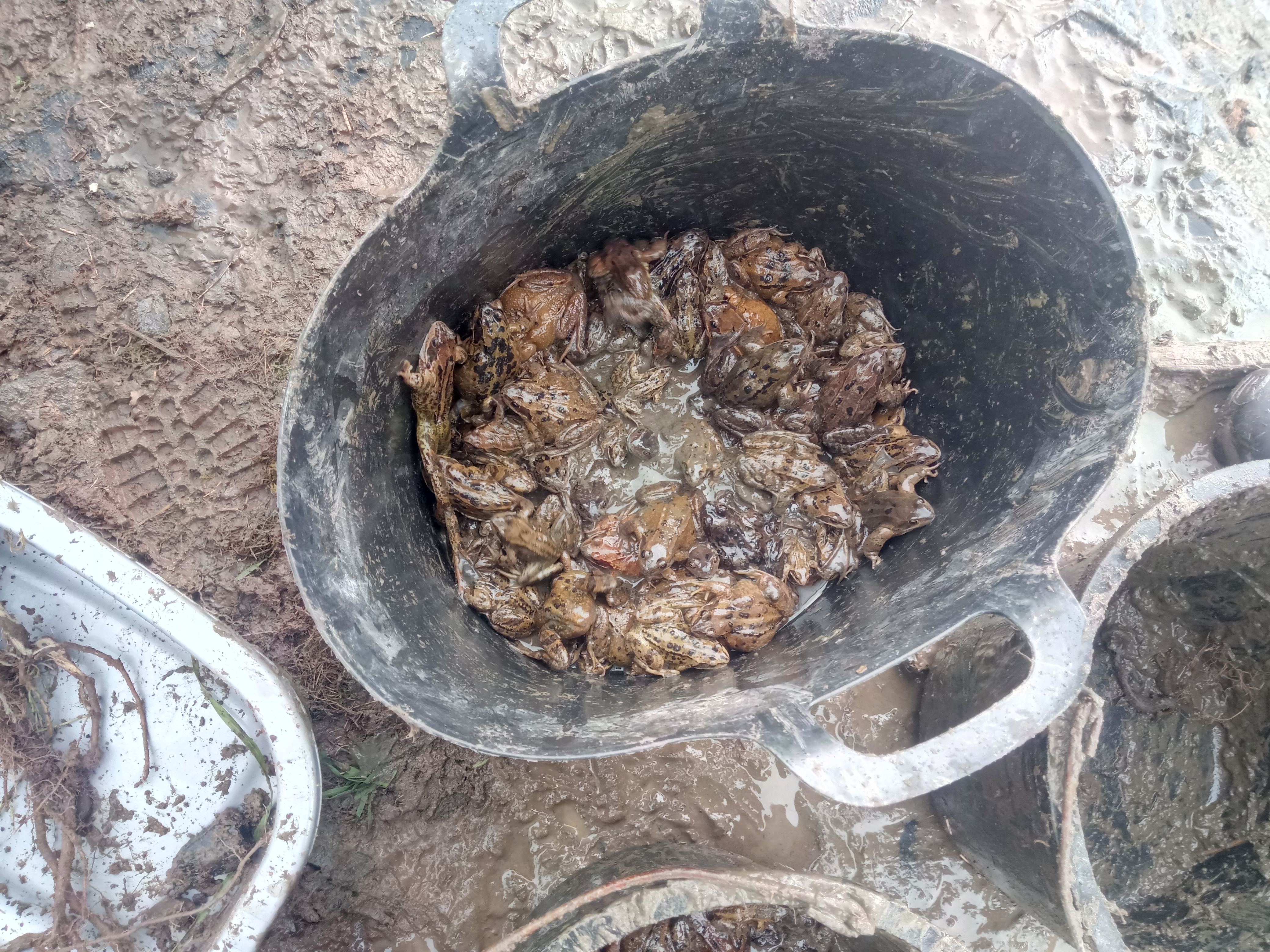 Frogs in a bucket!

"Soon everybody had gathered around the island, which was being dismantled stone by stone," says Eve. "There they were frogs of all sizes; huge ones and tiny ones in all shades of green and brown and orange. The island turned out to be a giant frog hibernaculum, with a handful of smooth newts thrown in for good measure. Under nearly every stone that was lifted there was a squirming mass of glistening, long-limbed bodies trying to find a new hiding place."

The deconstruction of the pond continued, but with great care taken to ensure the survival of these unexpected tenants. Rubble was sifted by hand to ensure no frogs were injured. When all the rubble had been carefully sifted and the last frog had been safely removed to one of the buckets, the group of volunteers found them a new home in a neighbouring pond (one of several at Glentress). 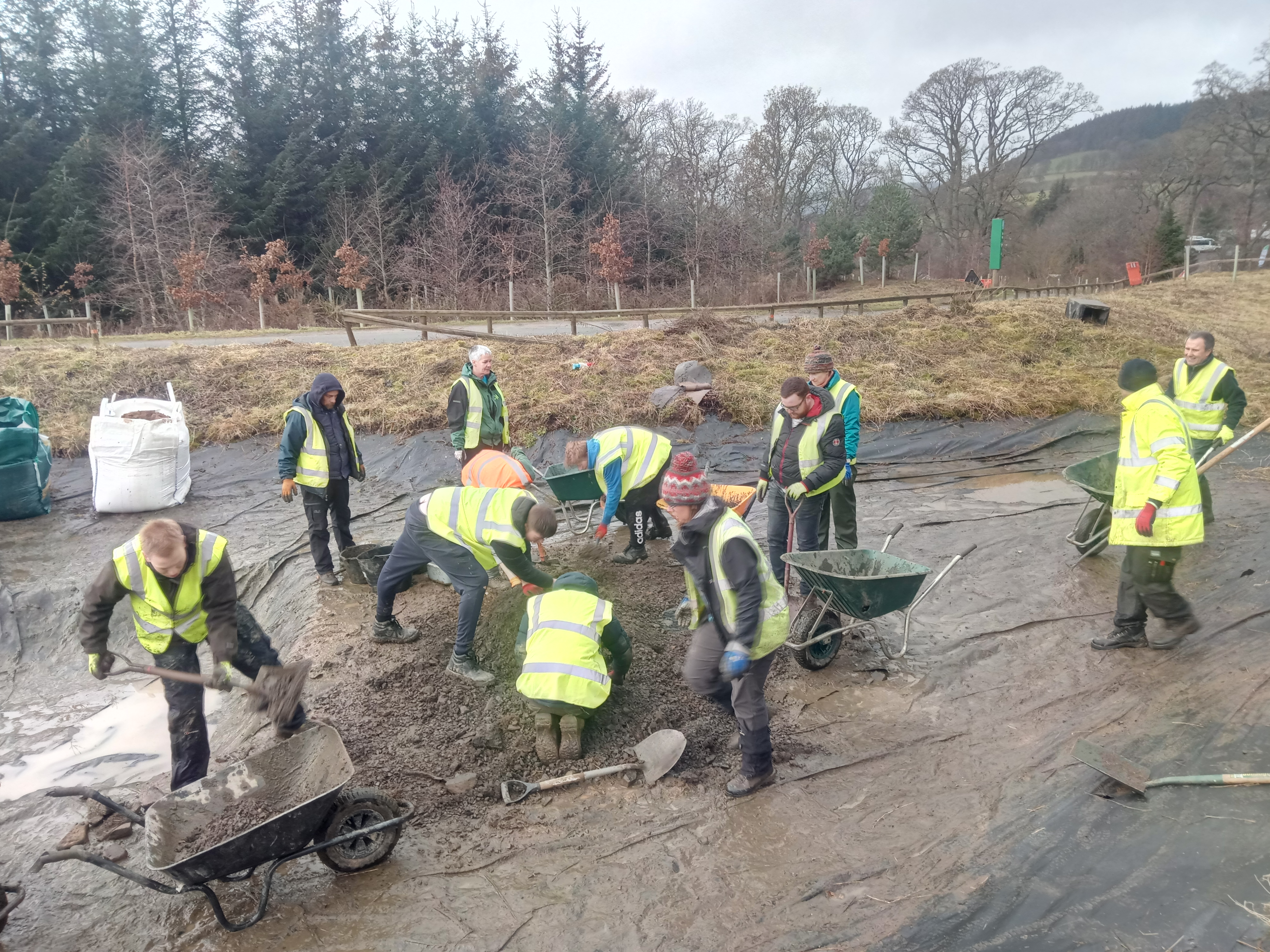 Moving stones and sand into place, over the pond's membrane

A week later, after a pump was used to remove rainwater, and a total of six tons of sand were added as a buffer for the pond's new membrane, manoeuvred into place by the volunteers. The pond was filled carefully from the feeder ponds on the opposite side of the road to allow the membrane to settle, before the carefully stored stones were lifted back into place.

"Mindful of the hibernation preferences of our slippery four legged friends, the island was built up to rise high enough above the water to provide plenty of dry hibernation spaces even when water levels are at their highest," says Eve. "As there were plenty of spare stones available, a small amphibian sun bathing island was also created in the shallowest part of the pond by the budding drystone masons among the keen volunteer group."

Thanks to our volunteers! 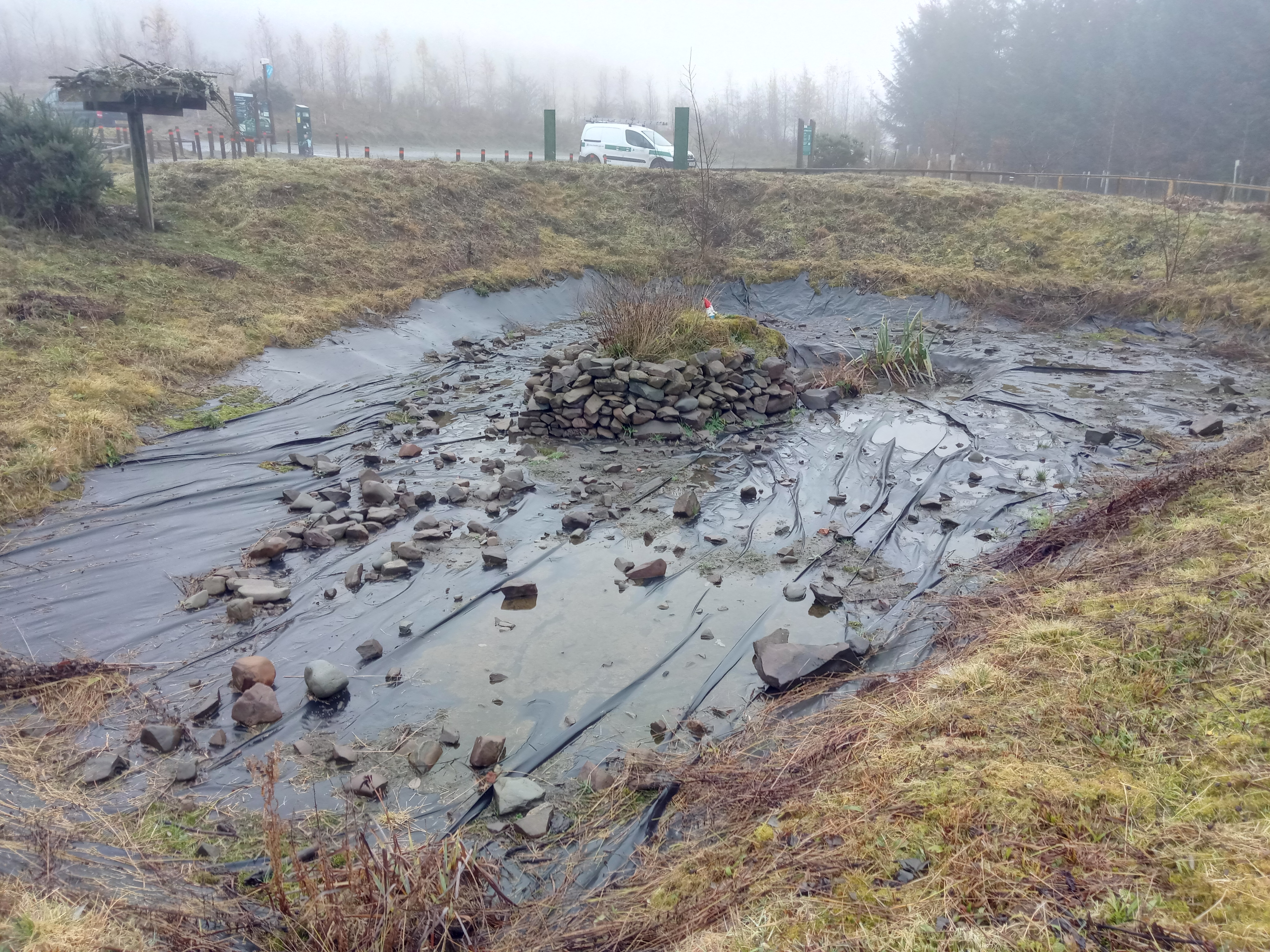 The pond before refilling, showing the central Frog Island - official capital of Frogtopia.

Eve and her volunteers watched as the water levels steadily rose, creating what will in time become another haven for amphibians and invertebrates. Over the spring months, visits from swallows and house martins are expected, as is the return of the much-loved Glentress ducks, who usually return some time in March to nest on the island.

"The whole project was carried out in an amazing couple of days of team working, with new experiences for many in the diverse group of volunteers," says Eve. "Working on the basis that hard labour in bad weather is character building, there were still plenty of breaks to allow chats and laughter over cups of tea and home-made cake."

With tea and cakes consumed, the volunteers went home happy, safe in the knowledge they had helped keep this important habitat safe for frogs, birds, and other creatures in the months and years to come.

There are lots of opportunities for volunteering with FLS - see the links below. Visit the ponds at Glentress to learn all about this diverse habitat, and explore more fascinating frog facts!