Every year we aim to plant around 25 million trees throughout Scotland. That’s five for every person in the country. And that’s just us, Forestry and Land Scotland. It doesn’t include the millions planted by other land owners. And it doesn’t take into account trees planted across England, Wales and Northern Ireland either. The point here is that every year, the UK plants an astonishing number of trees, even though we’re agreed we still need to plant more.

But where do they all come from? There’s no tree warehouse with saplings ready to go. We don’t import trees from abroad because the risk of spreading pests and diseases is too great. All these saplings have to come from somewhere, and they don’t just grow on trees, do they? Well, actually…

Read on to see how we start growing trees for the forests of tomorrow. 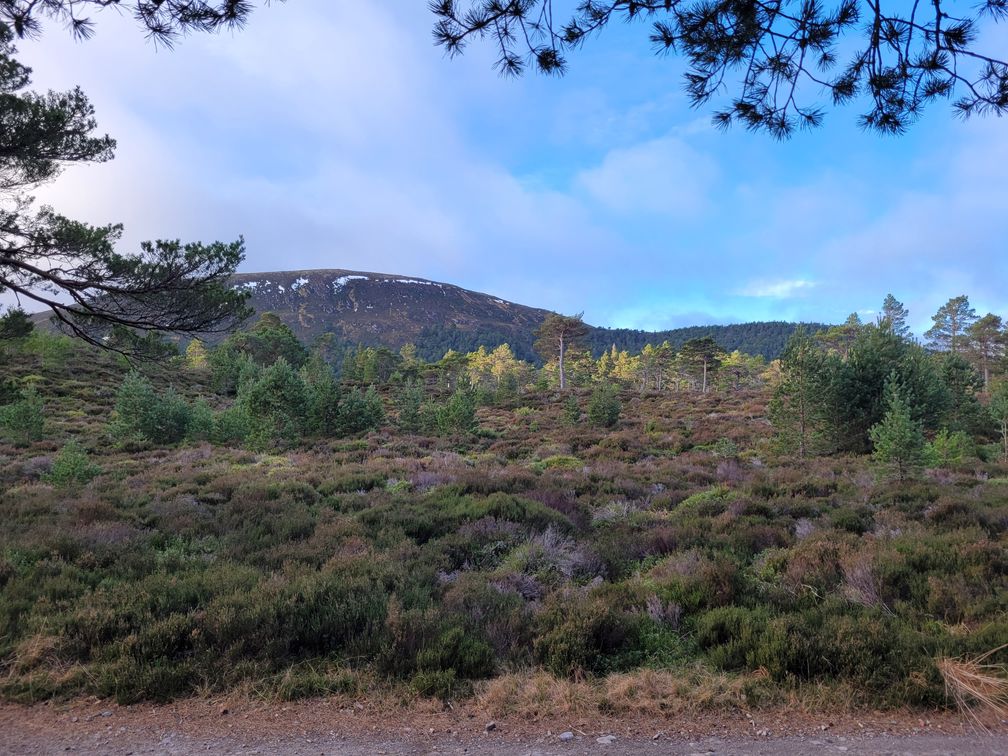 Pine trees in the Rothiemurchus section of Glenmore Forest in the Cairngorms. 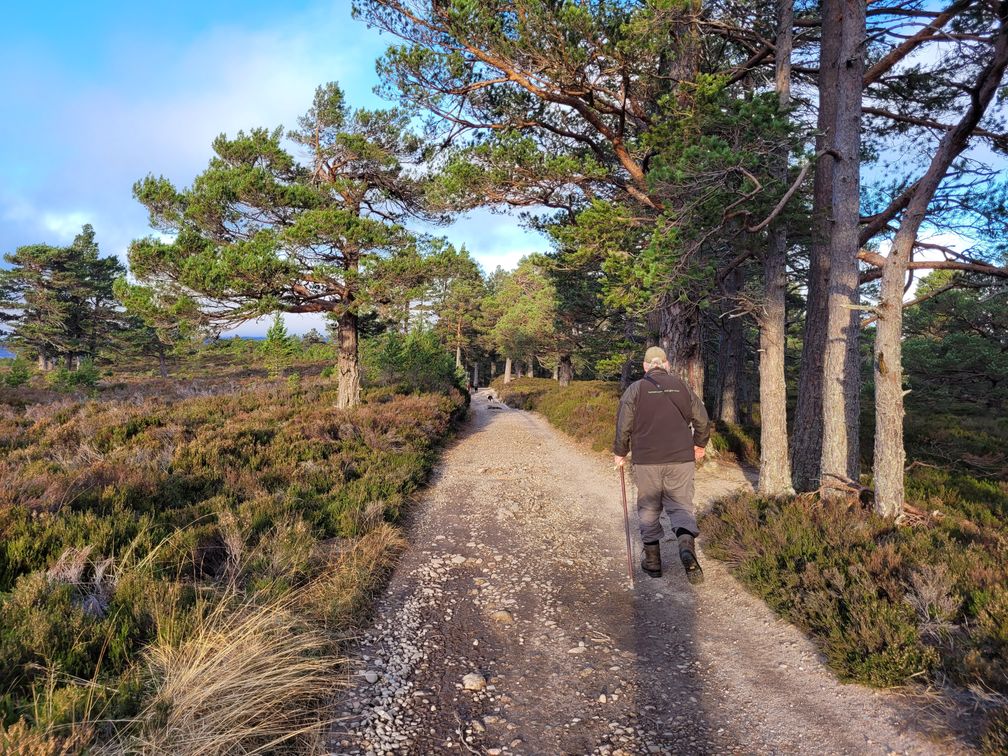 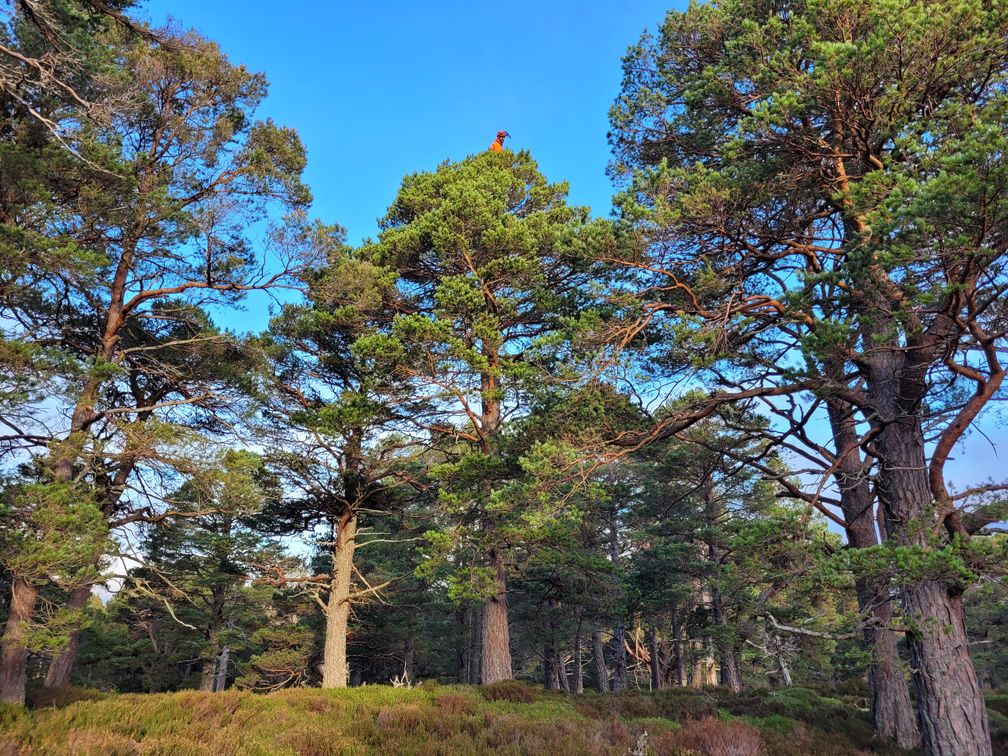 Andrew collecting seeds from the top of a tall pine in windy conditions. 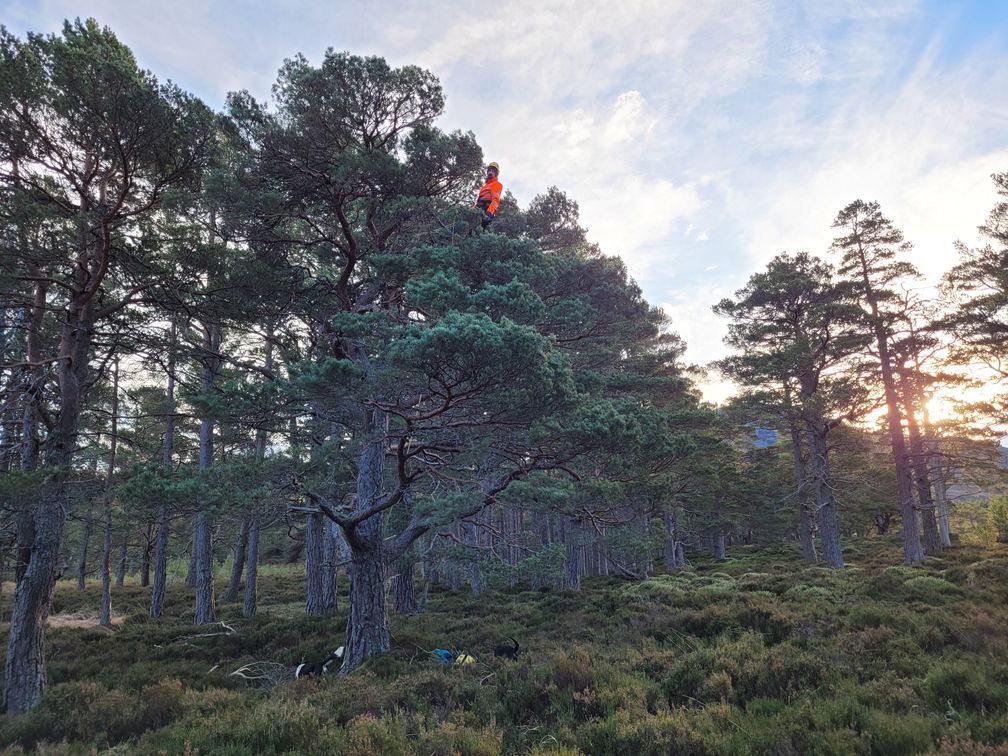 And colleague Liam in a nearby tree. Head for heights required! 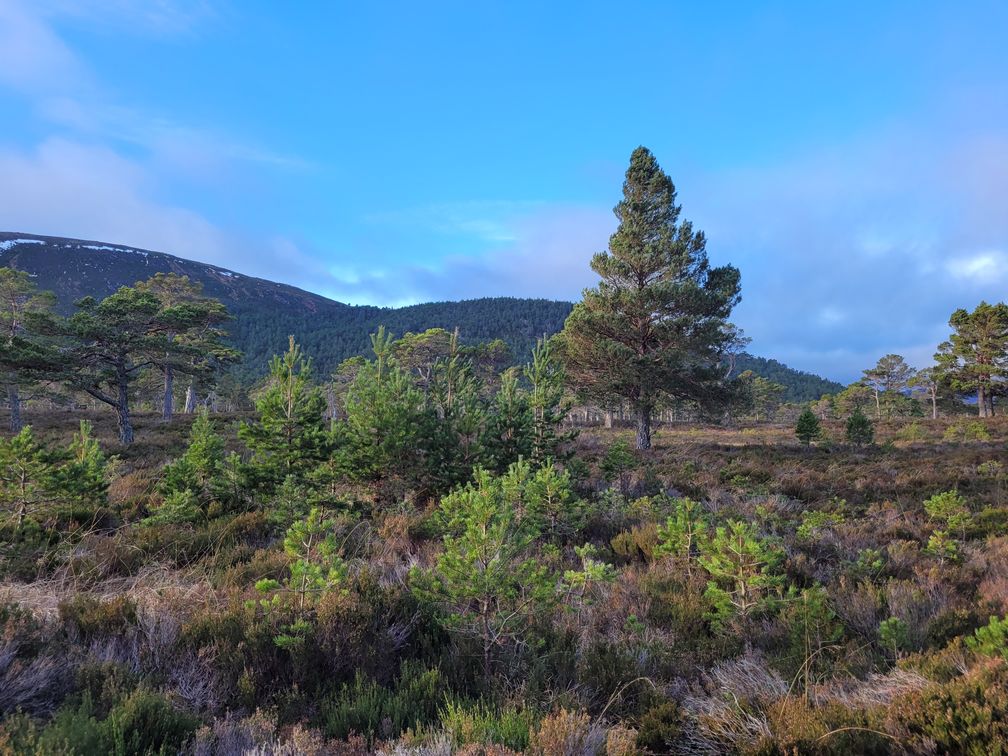 Despite the beautiful landscape and sky, it was pretty windy up in the canopy. 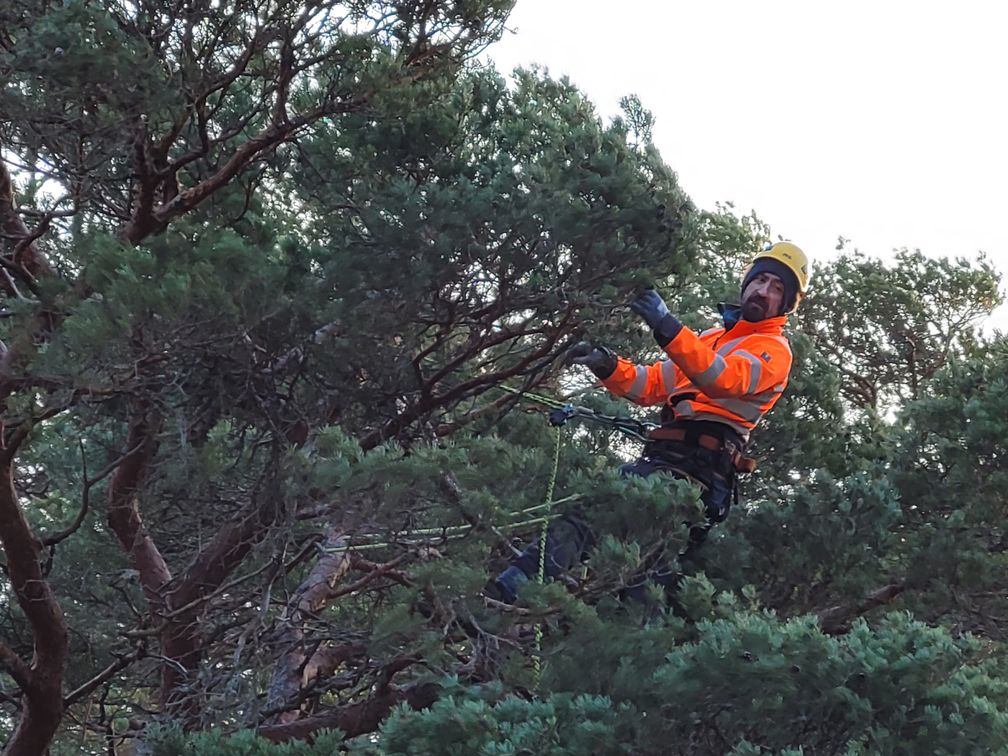 Liam, out on a limb! 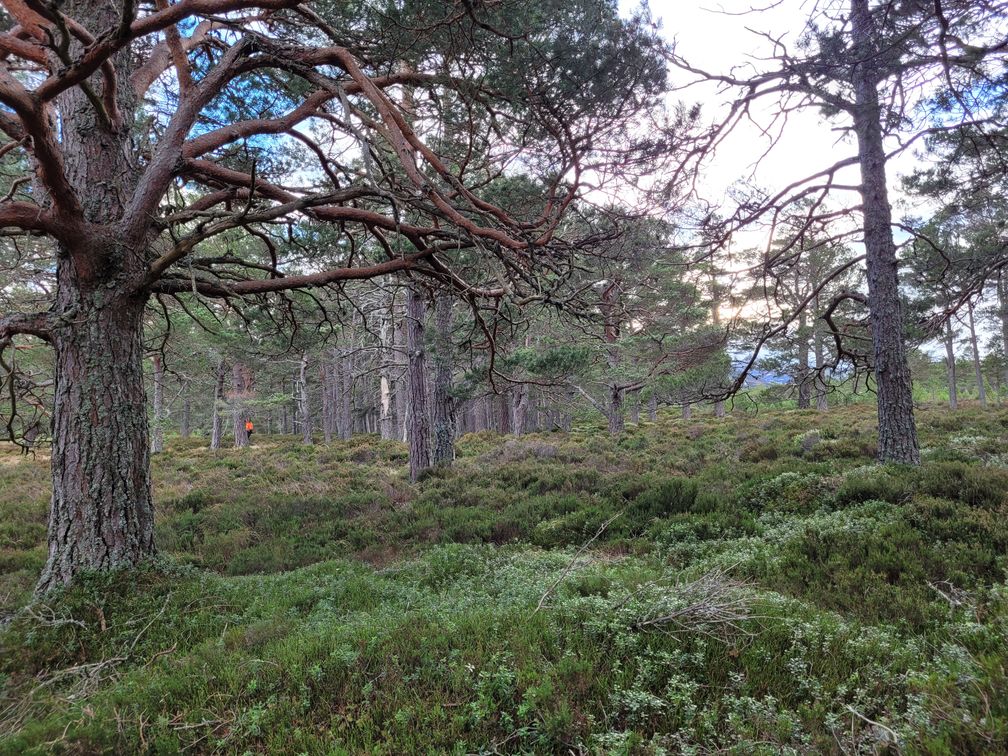 The cones from these trees will grow into saplings at our nursery and eventually be planted in areas across Scotland.
❮ ❯

When we talk about numbers of trees planted, we’re referring to saplings. These are typically very small in size, somewhere around 4 to 10 inches tall depending on the species. Saplings are grown in tree nurseries. We have one tree nursery in Newton, near Elgin in north-east Scotland. This area is home to several tree nurseries because, despite being in the north of Scotland, it has a great climate with lots of sunshine and just enough rainfall.

Our Newton nursery grows around 7 million trees a year, mostly conifers but some broadleaves like oak too. For the remaining 18 million trees we plant in a year, we source them from other nurseries in the UK. Every single one of these trees is grown from a seed. 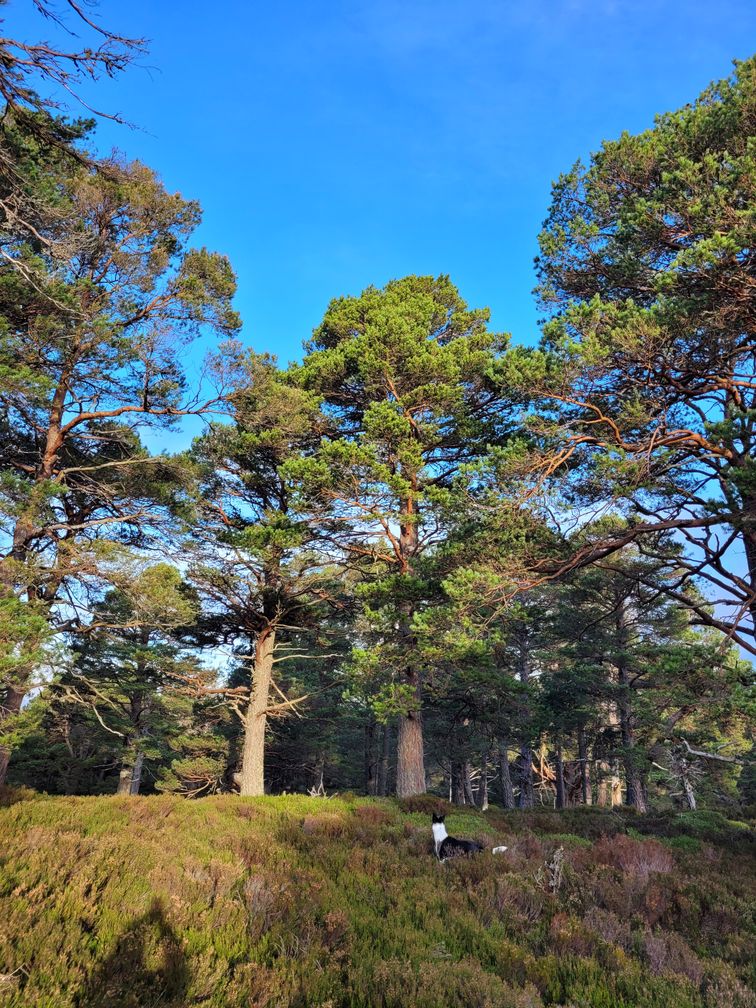 Believe it or not, there's a forester in this tree!

It sounds obvious. How else would you grow a tree, except from a seed? But that means our nursery alone needs to collect at least 7 million seeds every year. In reality, they need a lot more as not all will germinate or grow. An average cone of Scots pine might contain anything between 7 and 20 seeds. Whilst we don’t collect 7 million seeds of the same species, if we did, we’d need around one million pine cones. And all of those cones need to be picked by hand.

Before we can extract seeds and get them planted ready to become saplings, we need to gather them in the first place. For pine, that means gathering pine cones. If you find a pine cone on the ground with its scales opened up, chances are the seeds have already blown away. So most of the time we need to take them from the tree when they are closed, before they fall. And that means getting up into the canopy. 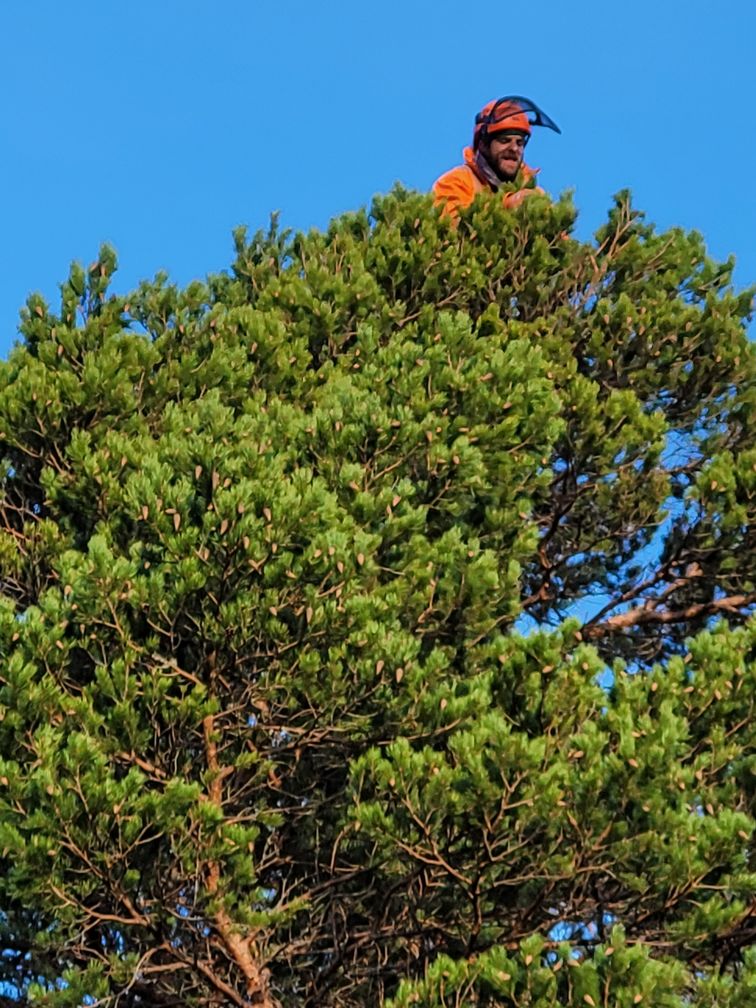 Andrew tops out into the sunshine and strengthening wind

In late January, we visited a team of specialist workers collecting pine cones in the Cairngorms. The area is populated almost exclusively with Scots pine, most of them mature but with some areas of younger trees. In amongst the branches are Andrew and Liam, dangling from a harness, balancing on limbs, and fighting their way through the dense canopy to find cones. Most cones in this area are around 3 to 5cm in length – fairly small. However, the trees here are good specimens and should provide seeds that grow into healthy and strong trees that we can plant elsewhere.

On a good day, the duo might be able to fill one 50-litre sack with cones. A full sack can weigh as much as 28kg and contains an average of 2,250 cones, which in turn contain quite a lot of seeds. Coming back to our example of requiring one million cones, we’d need almost 450 sacks to meet this target. So far this season (as of late January), Andrew and his team have collected around 70 full sacks of cones. They’ll keep collecting here and elsewhere in the area until the end of March. 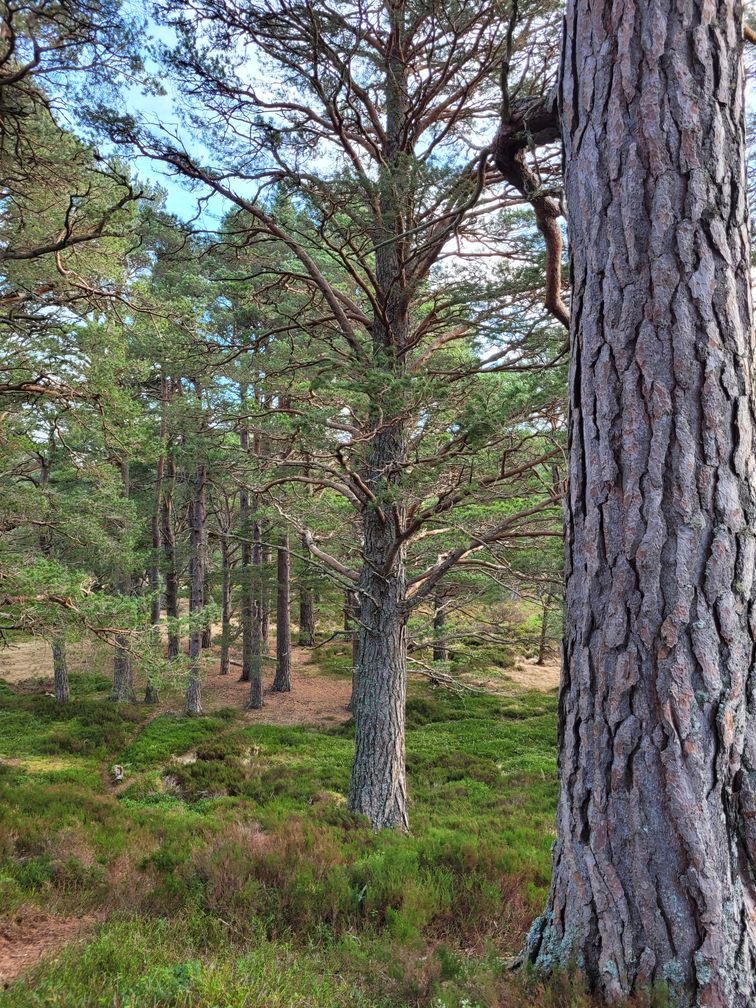 It’s far from an easy job. Firstly the team wander the area looking at various trees, trying to decide which ones are worth climbing into. Getting ropes set up and safety equipment on takes time, so it’s worth scouting first. Given the setup time, each picker will be looking to spend around half a day in each tree. If the tree could be picked in an hour, it usually isn’t worth bothering to climb. It’s a skilled yet monotonous task, but it’s a vital step in growing trees for areas across the country. 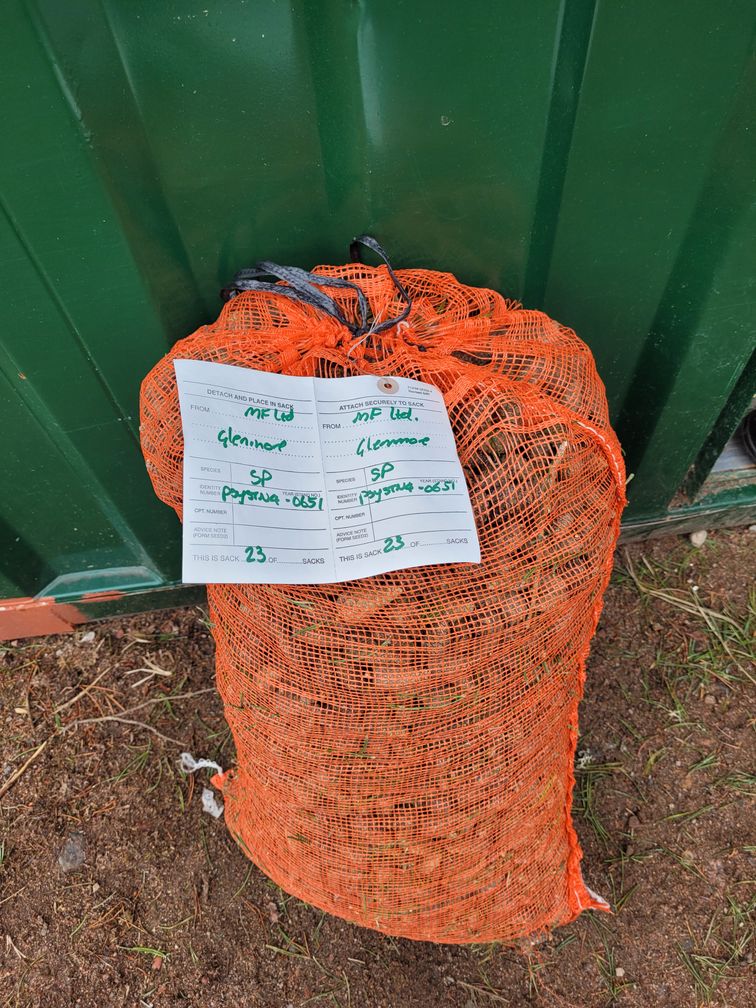 A full 50L sack of cones, containing around 2,250. It takes two people a full day to collect this.

From here, the cones are gathered together and sent to the seed extractory at Alice Holt Research Station in Hampshire. This facility, run by Forestry England, is an extractory which uses up to 10 different machines to extract seeds from the cones. Processes include drying in kilns, vibrating and tumbling to open the cones and discard the seed wings, and gravity tables to sort by size. Eventually, the mountain of pine cones is reduced to a bag of pure seeds. They are then held in storage at a temperature of minus 5°C and will store happily for up to a decade until required. When we’re ready for the seeds we’ll bring them to our nursery and get planting. If we end up with surplus seeds, they may be sold on to other nurseries but our priority is to use this scarce resource for our own needs first. It’s a lot of work before we even get seeds in the earth. 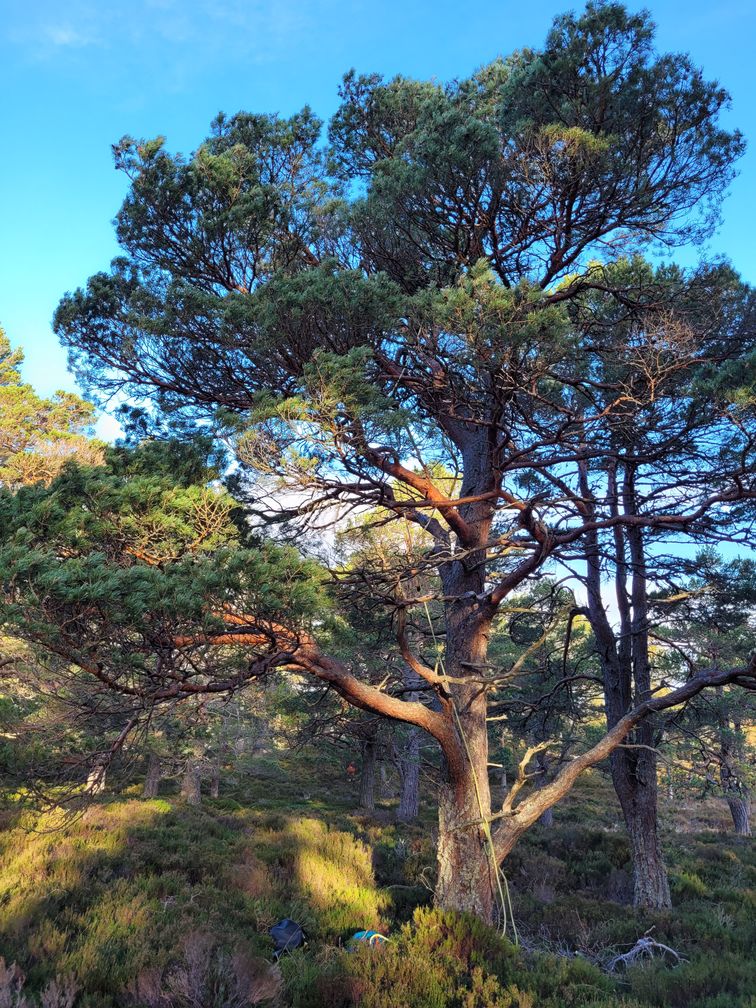 With a greater demand for trees than ever before, there is a greater demand for seeds too. But as in all parts of forestry, this process can’t be done quickly. If we want to create a new forest we might require an extra few million trees. It’ll probably take at least three years to gather the seeds and grow them to saplings before they can be planted. And if we look to buy them from elsewhere, we might find that the demand is so high there are few to be had.

However, we don’t necessarily need to go too far to find seeds. We have seed orchards at various locations in Scotland including our own Newton nursery. The Sitka spruce here are grown and maintained purely to provide top quality seeds. By selecting seeds from the best specimens we find, we’re able to make the next generation of trees stronger, straighter and faster growing. This makes them excellent for timber production, and it means we have more good specimens over time from which to harvest seeds from. We also grow so many that we have enough seeds to sell to other land managers throughout the UK. In fact, our Sitka seeds are so desirable, the trees in our seed stand are probably the most financially valuable in the whole country. 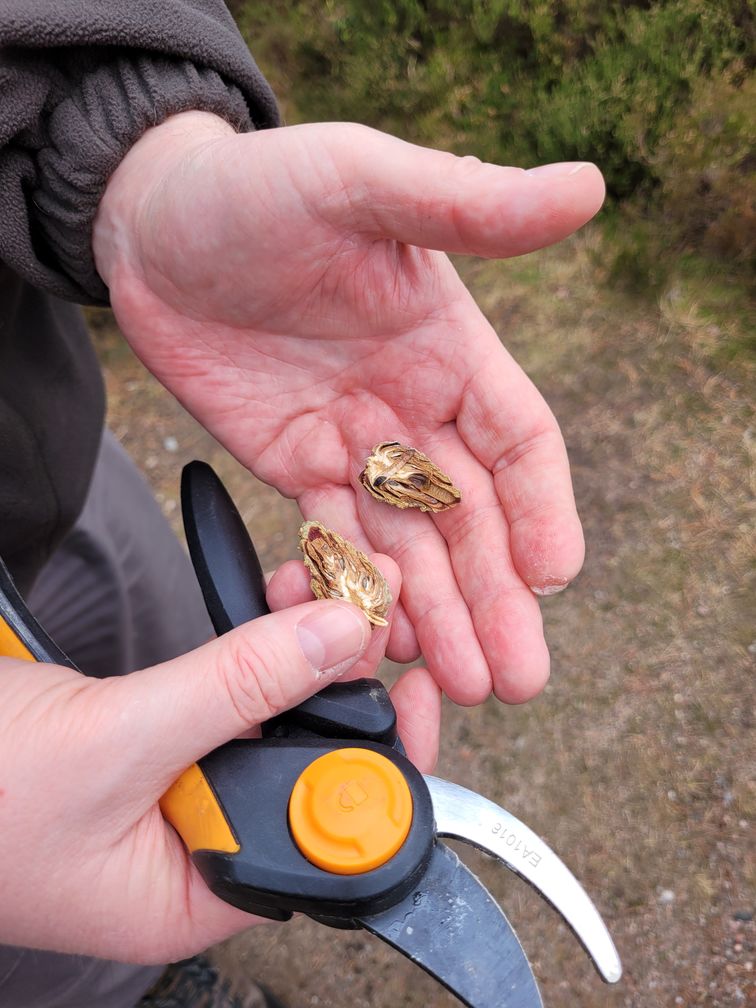 Professional forestry in the UK is just over 100 years old, and we’re still learning all the time. Planting and growing a tree can be a relatively simple process, but when you need millions of them, it’s a lot more difficult. The seed collecting process is the first of a long chain of events that will one day lead to a mature tree in a forest near you. It’s also one of the most important. It can take a long time to see progress in forestry, but making the best possible start with seeds helps our future forests grow better and stronger.