Slow Burn: Charcoal production in Callander
Back to
Blog 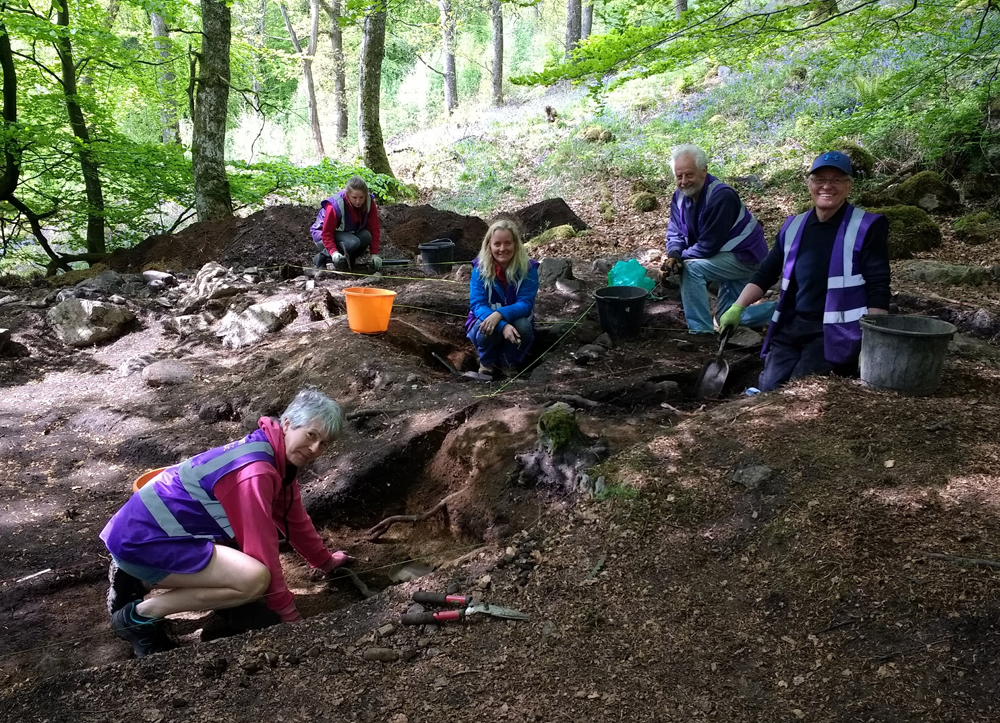 Back in 2019, Forestry and Land Scotland partnered with the Callander Landscape Partnership to excavate and research multiple sites of charcoal burning found in Leny Woods. This initiative became the Leny Woods Community Archaeology Project and helped discover more about the area, the production of charcoal (a key process in manufacturing metals in the 18th and 19th centuries), and introduced a diverse range of volunteers to the practice of archaeology. Here, our resident archaeologist Matt Ritchie provides an overview of the project, revealing some great discoveries. 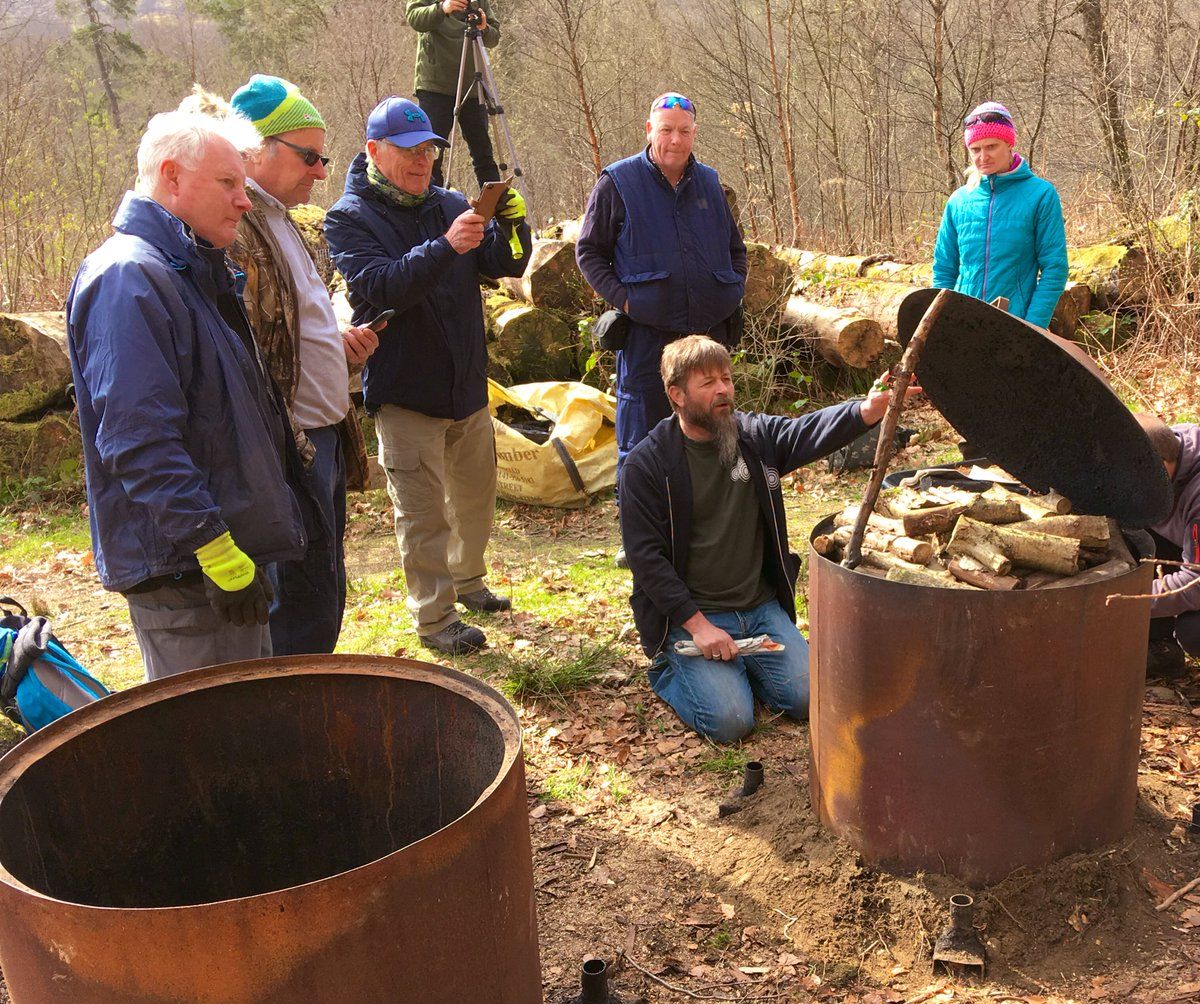 Volunteers learning about charcoal manufacture during the Modern Kilns event.

Leny Woods lies just to the west of Callander, on the steep south-facing slopes of the Pass of Leny. Oak is widespread across the hillside, with other native species such as birch and pine, and including smaller stands of conifer and beech. The woodland was managed throughout the 18th and 19th centuries as productive coppice, on an approximately twenty year rotation across three different areas known as haggs. The coppiced trees ensured a continuous source of wood for the production of charcoal, used for centuries in the production and working of metal and, more latterly, bark for the tanning industries of the central belt. This work was undertaken by mobile communities living in and caring for the woodlands, building their charcoal kilns on distinctive platforms terraced into the hillside.

A reconstructed charcoal burning. This experiment was monitored by volunteers around the clock for four days and created two builder's bags of charcoal.

The Leny Woods Community Archaeology Project included archival investigation, a historic woodlands survey, archaeological excavation and a range of training and outreach events, all centered on the well-preserved charcoal burning platforms found within the woodlands. It aimed to complement the wider work of the Callander Landscape Partnership by providing a training project with which to develop community skills and experience – an exemplar pilot model of archaeological work that could be replicated elsewhere in the area.

Developed in line with Scotland’s Archaeology Strategy, the project had three principal aims:

Initial archaeological surveys of Leny Woods built upon comprehensive earlier work by the Association of Certificated Field Archaeologists in 2000. These surveys identified a series of eighteen distinct platforms, along with a further seventeen that were less pronounced. Most were strung out across the lower slopes, although more isolated examples existed on higher ground. 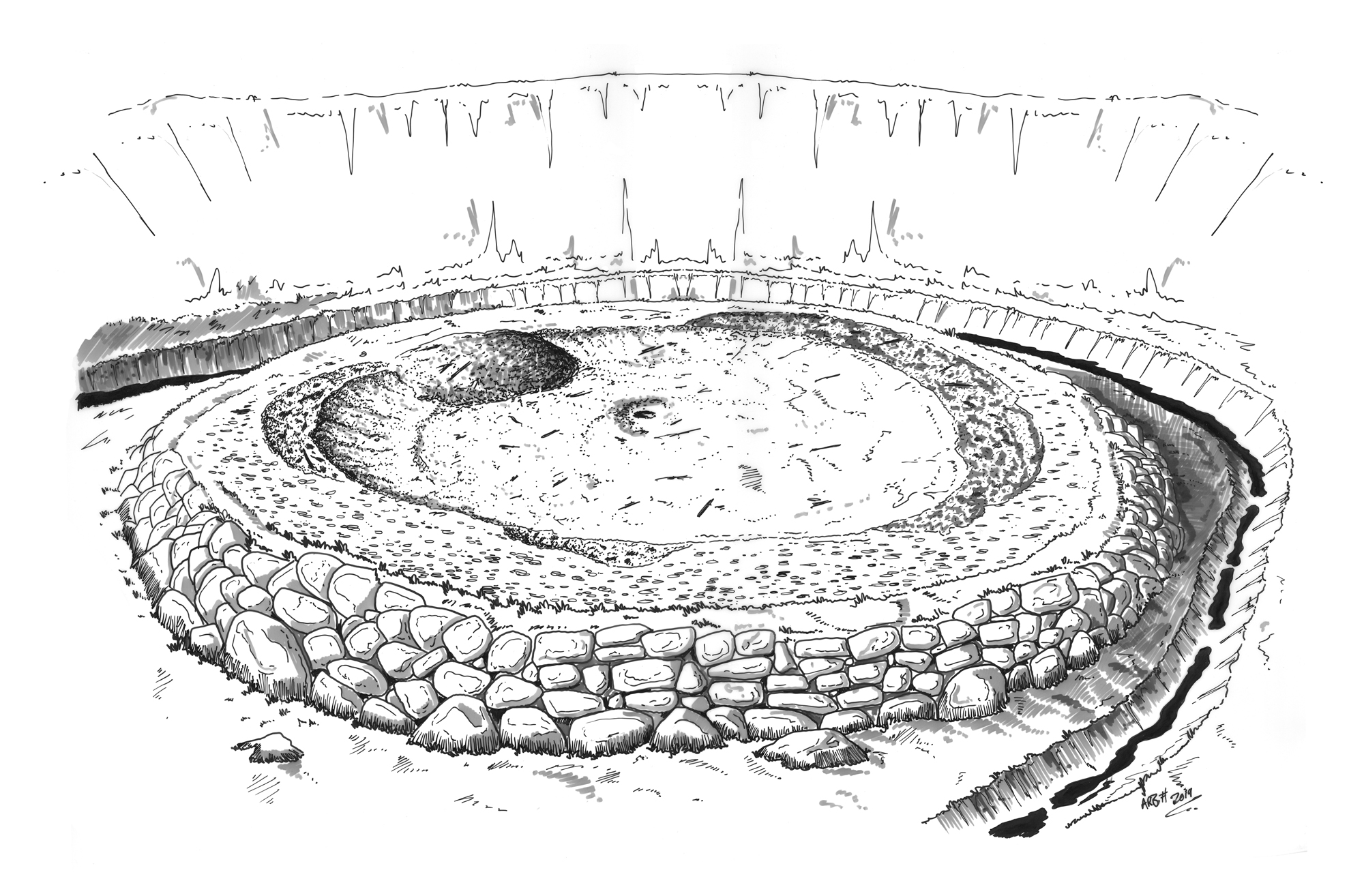 This anatomy of a charcoal burning platform was pieced together through the survey and excavation of several different sites. Terraced into the slope at the rear with a drystone revetment wall at the front, the level surface of the platform bore many individual kilns over time, and may have been extended on several occasions. A drainage hood has been cut around the rear (illustration by Alan Braby).

The platforms comprise level terraces, circular or oval on plan, and formed by cutting into the upslope side and depositing this material on the downslope side. The platform was often retained by a dry stone revetment wall. The platforms in Leny Woods usually measure between 6m and 10m in diameter, with the occasional larger example measuring up to 13m in diameter. The scale and style of the revetment wall varies in relation to the steepness of the slope, and some of the platforms had drainage hoods around their rear end.

When in use, seasoned logs would have been piled up into a tight cone on each platform and then covered in earth and turf to form an airtight mound. This ensured that the wood slowly charred when the kiln was burning over a number of days. The kiln needed to be carefully tended to ensure that air wasn’t drawn through cracks to ruin the burn, with additional soil on hand to patch up any cracks that developed. 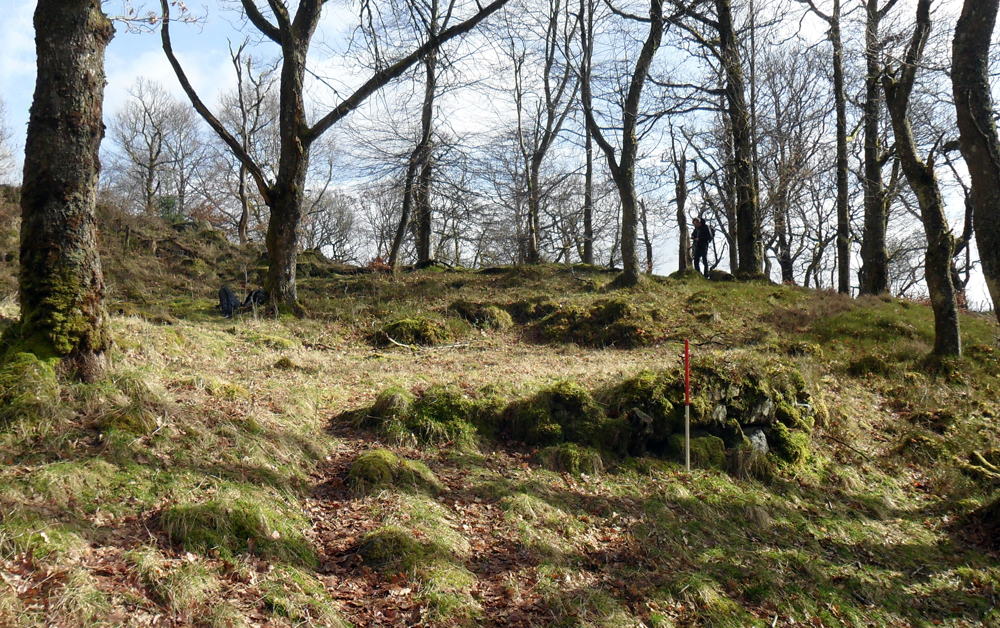 One of the charcoal burning platforms chosen for excavation.

Demand for charcoal increased in the mid to late 18th century during the early development of the blast furnace and, in 1759, the Carron Ironworks signed a contract with Elizabeth Buchannan (then owner of Leny Estate) for the use of wood at Leny. The skills of the charcoal burner would have been in high demand at this time, moving from woodland to woodland. There are records of charcoal burners taking the soil that they used to cover their kilns with them from site to site, so accustomed were they to the properties of their particular soil and how it would react during prolonged heating.

Oak bark for the leather tanning industry was also valuable in the 18th and 19th centuries and would have been stripped from the trees, perhaps by the charcoal burners themselves, prior to the wood being cut to appropriate lengths and stacked to season. Some Carron Company letters indicate that the money obtained from selling the bark would virtually cover the price of leasing the woodland.

Dendrochronological work carried out as part of the project identified that the last oak coppicing episode occurred in the 1890s, marking the end of a long history of traditional bark stripping and charcoal production. A phase of singling the coppice stools occurred at the very start of the 20th century, marking a shift in woodland management away from coppice to a focus on timber production. 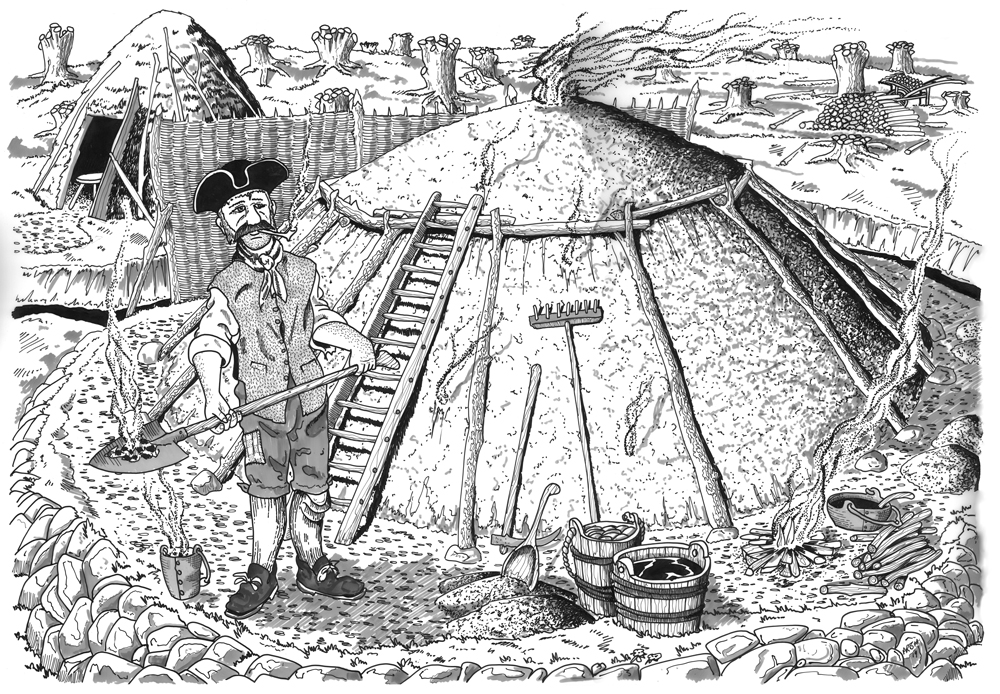 This reconstruction of a charcoal burn in progress shows the coppiced trees, seasoned wood and charcoal burner’s hut in the background. The charcoal burner is shown lighting the kiln from above using hot embers, alongside all the tools and materials he needs to control the long burn. He uses the wattle panels to control the airflow and has water on hand to rapidly cool the kiln when opening, preventing whole kiln going up in fl­ames (illustration by Alan Braby).

Although undoubtedly many of the visible platforms within Leny Woods relate to 18th and 19th century charcoal making, excavation of three examples showed that at least some underwent phases of resurfacing and expansion, the increase in size perhaps relating to the increase in demand from early iron works. The presence of two pieces of clay pipe manufactured in Edinburgh between 1640 and 1660 certainly suggests that some of the platforms were being used prior to the 18th century, while a sample of charcoal from an unusual charcoal-rich pit, set immediately next to one of the larger platforms, was radiocarbon dated to the early to mid-15th century, showing the tradition of charcoal making in Leny Woods could stretch back at least 600 years.

Exploring the life of the charcoal burners as part of the Leny Woods project revealed methods of sustainable woodland management that would once have been widespread throughout Scotland’s woodlands. The long term and sustainable practices of charcoal burning, coppicing and bark-stripping have particular resonance today, as we all look to plan and adapt to the challenges and impacts of climate change. 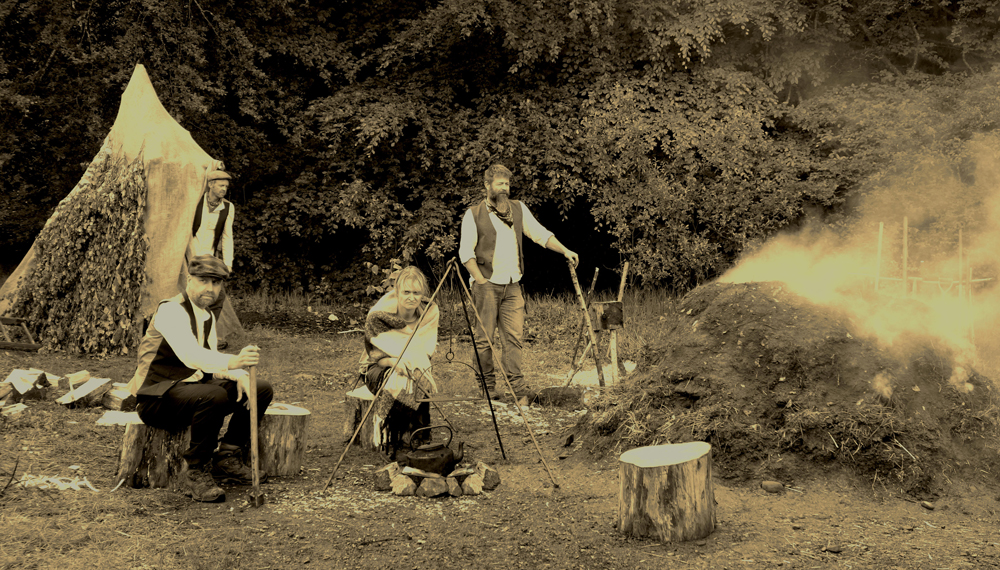 Led by Paul Cookson (Green Aspirations), experiences gained at Leny Wood through producing charcoal in both modern metal and traditional earth kilns allowed volunteers to delve deeper into the lives of the charcoal burners and helped interpret the archaeological remains.

This project was designed to introduce volunteers to the practice of archaeology in a fashion that would impart crucial skills and information to participants so that this kind of work could be undertaken on other sites in the area.

The Leny Woods Community Archaeology Project was broken into three key stages, with a range of training and volunteering opportunities and a series of expert-led workshops to help participants understand the various archaeological processes and methodologies involved. The Project Design was specifically structured and planned to facilitate an accessible and practical training programme – an exemplar pilot model of archaeological work that could be replicated elsewhere in the area by the Callander Landscape Partnership. 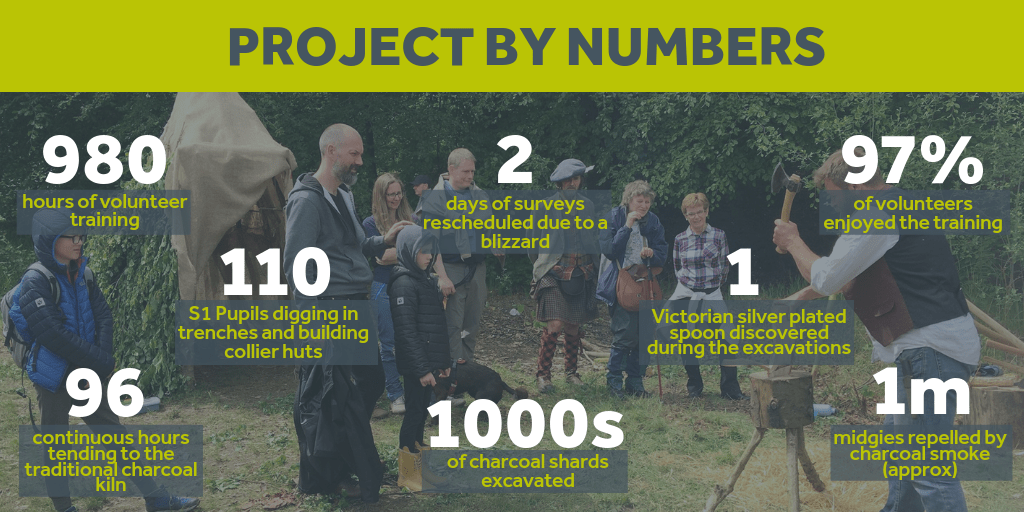 Discover more about the heritage to be found in our forests here, and for more information about the Leny Woods Community Archaeology Project please visit Callander's Landscape.