The UK is known for turbulent weather. Coming into winter, we expect to see higher winds, heavier rain and snow too. However, Storm Arwen was a considerable step above the usual bad weather. With extreme winds and some heavy snow battering the country, it caused large scale damage and several fatalities. Whilst the impact on utilities and services in some parts of the country was substantial, it has been no less damaging to many of Scotland’s forests. In the aftermath of the storm, we look at the scale of the damage and what we’re doing to set things right. 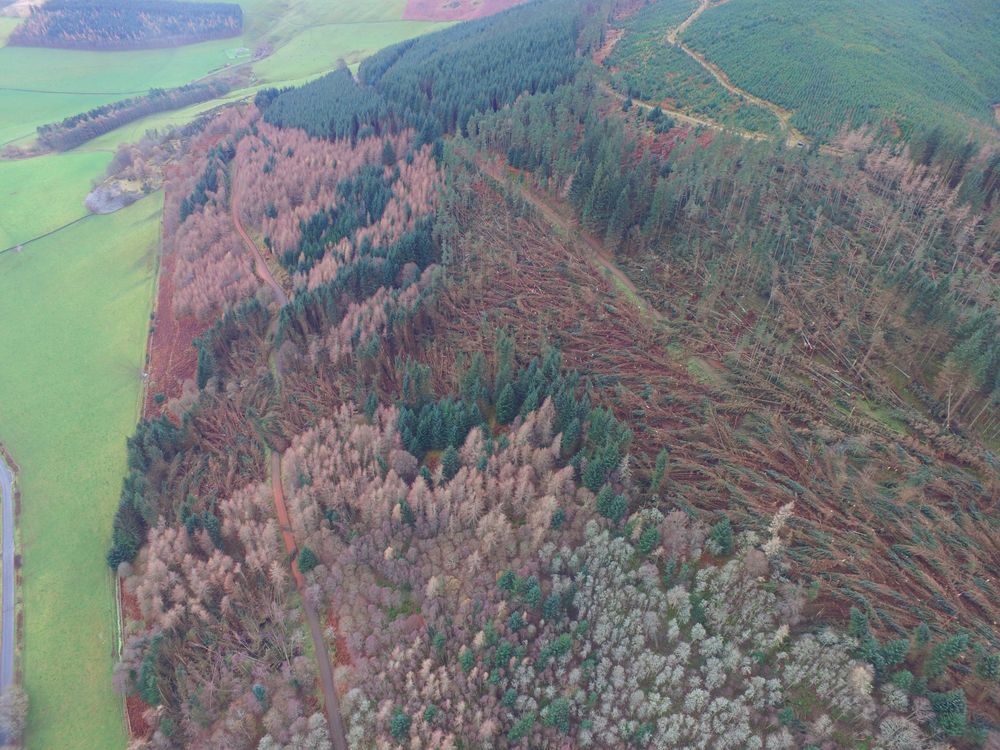 We can get to work as soon as the weather stabilises. The first step is to assess the damage. The high winds brought by Arwen, the highest recorded gust being 110mph, have meant many trees blown over, and many branches torn off. Inspecting our forests has been challenging and hazardous. Fallen trees hung up on other standing trees cause significant risks to people. Fallen branches have made some trails and forest roads almost impassable. But only by checking the damage can we arrange the appropriate clean-up actions.

Local staff are able to cautiously inspect their areas, while satellite images and drone flights can help see the broader picture. In numbers:

Taken as a whole, the storm has wreaked widespread damage in our forests, particularly in the south and east of the country.

We want to open our forests again as soon as possible. Scotland’s national forests are popular places for recreation, home to many businesses, and proven to provide benefits to mental health. Our first considerations are to lives and livelihoods, like making key areas safe, and working in collaboration with other parties to repair utilities. This includes repairing damage to public roads and other public infrastructure, and clearing issues on adjoining land.

After fixing the headline issues, we can think about timber and trails. 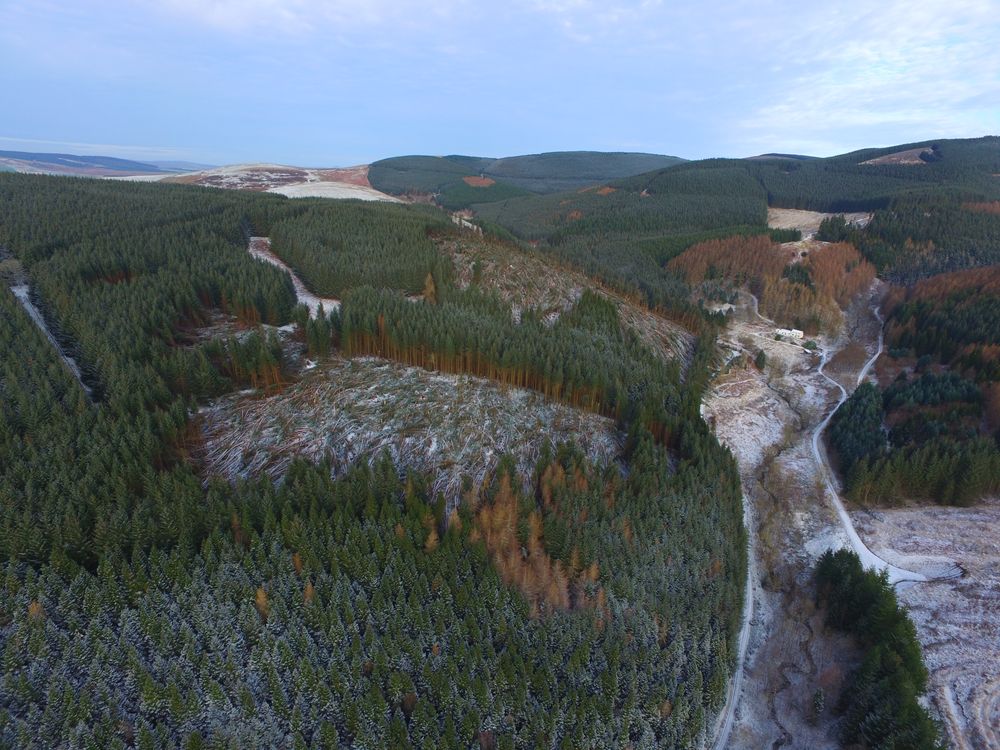 In terms of the timber generated by fallen trees, fully planning what to do can take a significant amount of time. Almost all of our forests have 10-year plans, which may need to be heavily revised in the wake of the damage sustained from the storm. Existing harvesting operations may need to be re-scheduled or cancelled, and resources diverted to try and recover fallen trees. This is possible in areas where large swathes of forest have been blown over, but where isolated trees have come down, it is often not possible or economical to recover the timber. This does however create good deadwood habitats that can benefit a number of species. Where we can recover timber, we aim to use this to displace timber that was planned to be felled. We try to balance our safety, legal, social and environmental responsibilities with staff capacity to get things back on an even keel.

After clearing we can think about re-establishing a new generation of trees. We’re already diversifying how we plant, mixing up species to create a more rounded environment, and helping our forests fight off diseases and pests. In some areas, the destruction caused by Storm Arwen may, in time, provide an opportunity to create new woodland with more benefits for the climate, environment, and future timber production.

Walking and biking trails provide one of the most challenging issues. These attractions support local, often rural, communities. Being accessible to the public, we have to ensure they are safe to visit. Unfortunately, it only takes one tree fallen in a crucial area to cause significant repair work. Since Storm Arwen, there have been many trees fallen in such a way, making the need for extensive repairs. 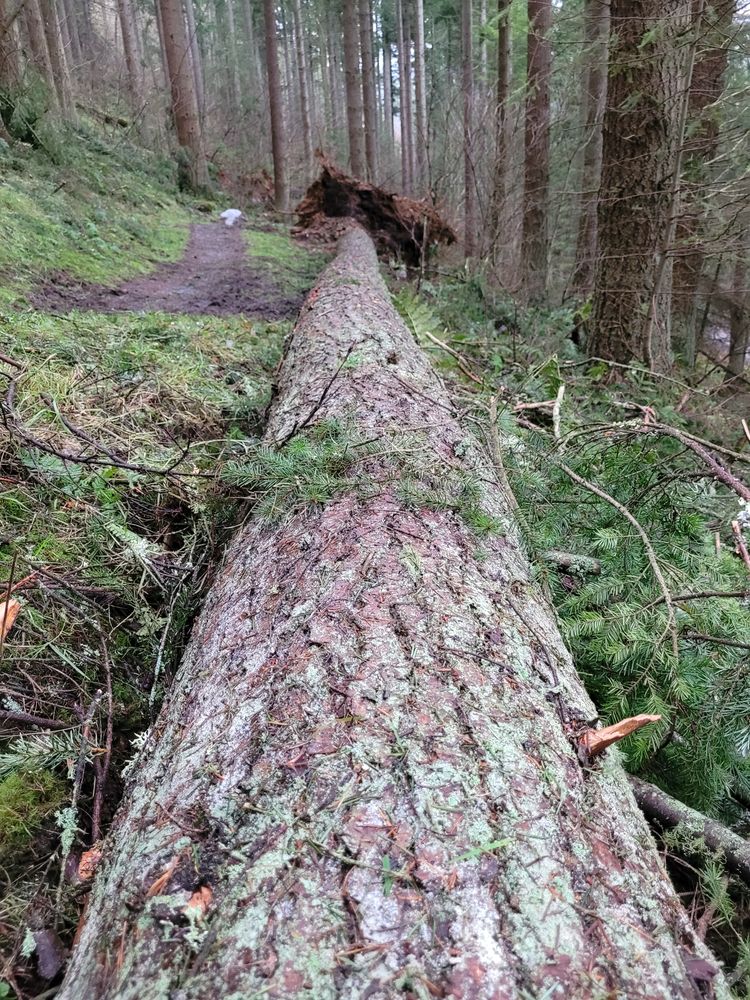 Inspections in our forests so far show there are plenty of walking and biking trails that we can get back up and running with a little maintenance. Sometimes clearing branches and debris is all that is required. But linking functional trails together will take a bit longer and we will likely see our trail centres open eventually with diversions to bypass the worst affected areas.

Storm Arwen has caused more damage to Scotland’s forests than any other weather event for many years. We’re working hard to get things cleared up, and we appreciate that having forests out of action is a major inconvenience. The co-operation of the public in staying away while we make areas safe is wholly appreciated. We hope to be able to open some forests and trails in the near future, while some badly affected areas may take months to repair. Rest assured we’re doing everything we can to re-open al of Scotland’s forests for everyone to enjoy.