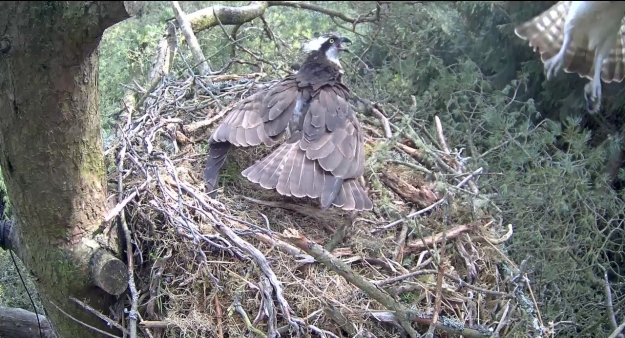 It has been a very busy week on the main osprey nest in the Tweed Valley. The resident pair, Mrs O and SS have settled down together for the season. After laying an egg on Easter Sunday, Mrs O then went on to lay two more over the next few days. Egg number 2 arrived on Wednesday 24 April, and the volunteer on duty on Friday 26 April got a lovely surprise when she found a third egg that morning.

Now, the serious duty of incubation has begun, and it’s time for SS to prove his worth as a mate by providing fish for her when she is hungry and looking after the eggs while she feeds.

So far, all seems to be going well for them. Mrs O, known for her demanding squawks when she wants something, is a changed bird. She has dropped the attitude, and serenity has descended the nest site as a contented Mrs O sits on her clutch of 3 eggs. SS is bringing plenty of fish to support her.

A few visitors to the nest site have broken the monotony watching Mrs O sitting still on her eggs. The cheeky jay visitor returned and took a bolder approach by sitting on the top of the nest while Mrs O was sitting on her eggs. Perhaps he feels safe while she is sitting on her eggs? We somehow get the feeling that his visits will be repeated throughout the summer. Another little visitor was a chaffinch that popped onto the lower side of the nest, and helped herself to a bit of nice moss for her own nest while a docile Mrs O looked on.

Not all visitors are welcome though… while SS was away fishing on Sunday 28 April a very startled and upset Mrs O became agitated as the shadow of a large bird flew over the nest. She rose from the eggs and mantled her wings over them for protection and with an open beak and a fierce expression. As she glared up at the sky, an intruder male osprey dropped in. His legs could just be seen as he dropped down towards the nest as though to land. 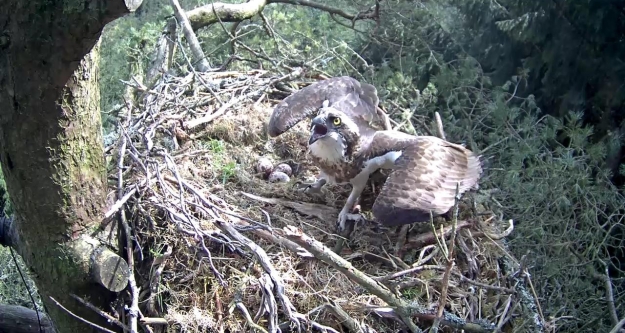 We got a clear view, and could see that this bird had no leg rings, and has not been seen here before. He overflew the nest itself and had the audacity to land on the left hand perch above Mrs O, who was not happy at all. She drew herself up into a magnificent posture of aggression and launched herself into the air towards the perch, to topple the unwelcome visitor and drive him away.

He flew off and she gave chase. This was a very scary time for her, as she had to leave her eggs unattended to deal with the imposter. She returned as quickly as possible and thankfully the eggs were unharmed. She settled back down to shield them and keep them warm.

When both birds are present at the nest it, would usually be the male that would have dealt with the intruder. Because she was alone, Mrs O had no option but to deal with the threatening situation herself. It is always a dangerous situation leaving precious eggs exposed. Our friend the Jay, or even crows and pine martens would all appreciate a free meal if they had the opportunity. 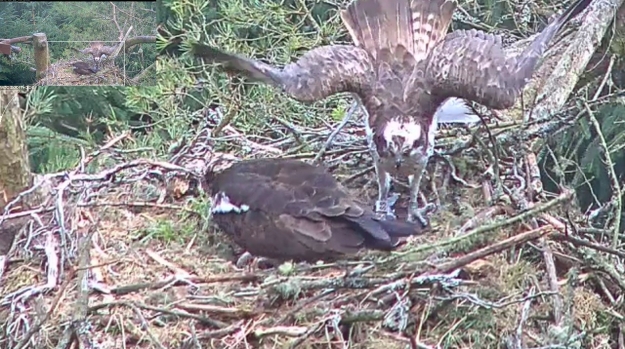 SS returned about 45 minutes later with a fish and Mrs O was pleased to see him. She rose from the eggs and took the fish immediately, moving up on to the right hand perch to feed while SS busied himself tidying the nest and moving moss and sticks around, before settling down onto the eggs and having an afternoon nap.

No ospreys have taken up residence at the back up no.2 nest this year. The male bird 8C (FK8’s father) died last year, and his un-ringed female partner never made a secure partnership with any of the incoming male birds. At the end of the season, birds were at the site and building the nest up, which led us to be hopeful that they would occupy the site this year. Thus far, both the original back up nest and no.2 nests are unoccupied this season.

The nestbox camera at Kailzie Gardens osprey watch centre has a pair of great tits in residence, and they now have a clutch of seven eggs. They will incubate for the next couple of weeks and then we should be able to watch them rearing their young family.

If anybody would like to be a volunteer, please get in touch by email at This email address is being protected from spambots. You need JavaScript enabled to view it..