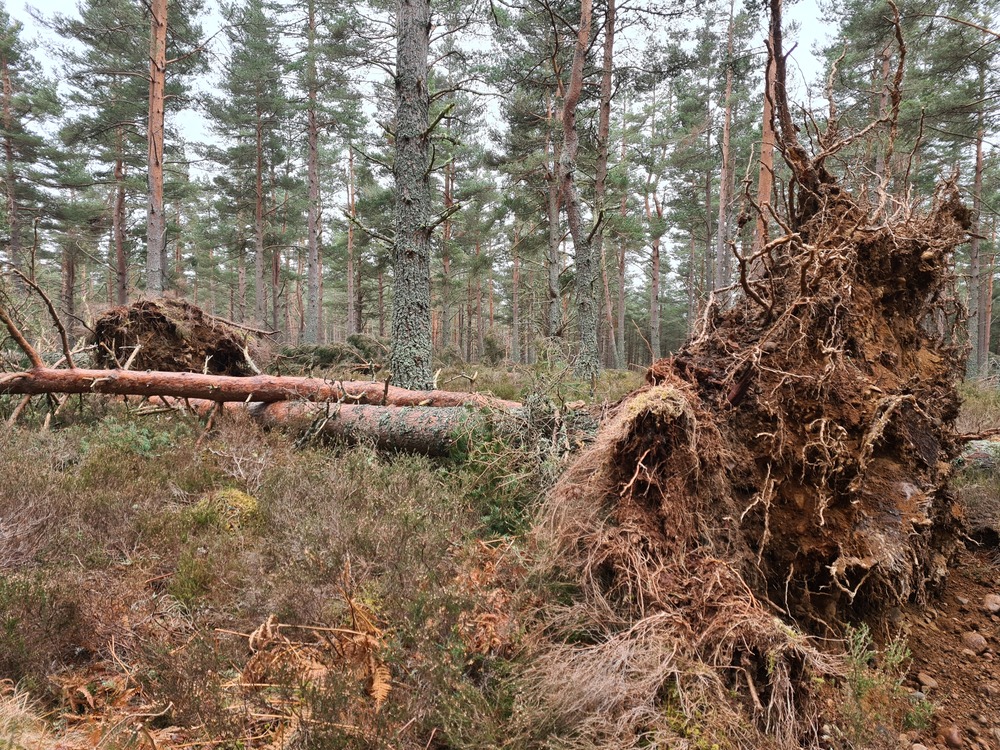 Although storm damage can hinder public access to forests and take time to clear, it is an essential part of the forest ecosystem.

Alongside normal harvesting and storm clearance work, forest managers now purposely leave a proportion of wind blow and deadwood – instead of ‘tidying up’ forests, to create habitats for all kinds of species.

"There is loads of research that shows that the more types of deadwood you have in an area, the more deadwood-dependent species you will support. Providing a range of deadwood is a simple and rapid way to increase biodiversity.  It is also very cost effective!” 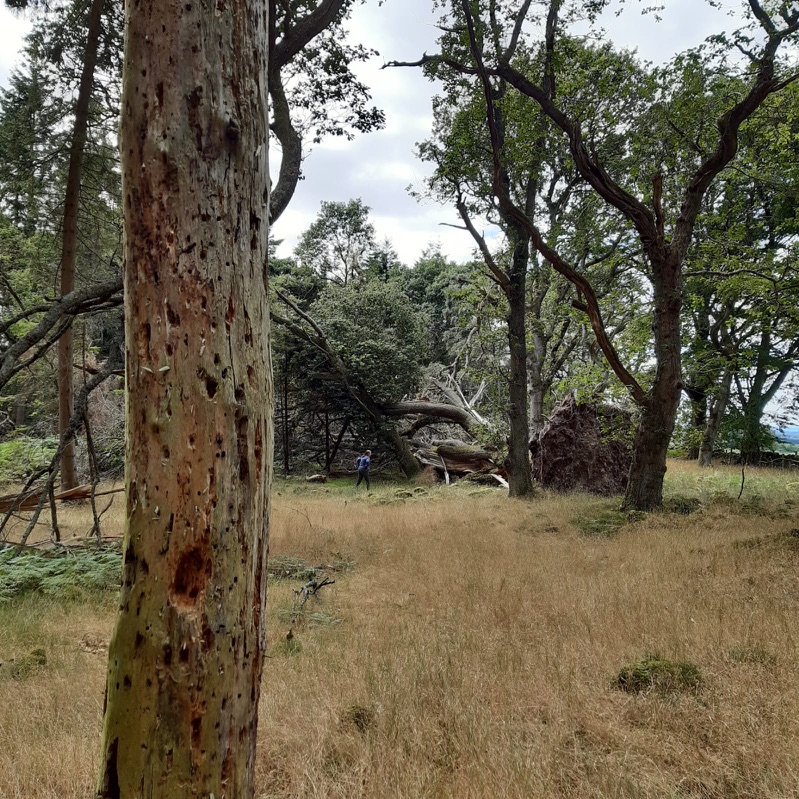 Standing trees with broken tops die slowly and provide cracks and rot holes for bats, woodpeckers, pine marten and a host of creepy crawlies. Fallen deadwood is great for mosses, lichens and fungi and if piles are left on the ground, they can provide shelter and dens for mammals and birds.

“It’s all about working with nature to make our forests more natural. The trouble is that dead trees and decaying logs don’t look attractive to everybody, but we need to learn to love it!”

The wind blow has also restructured the forest, creating a more open woodland and this has encouraged some species such as osprey and white tailed eagle to establish new nest sites and breed successfully. This practice is now an integral part of modern-day sustainable forest management and a requirement of forest certification. 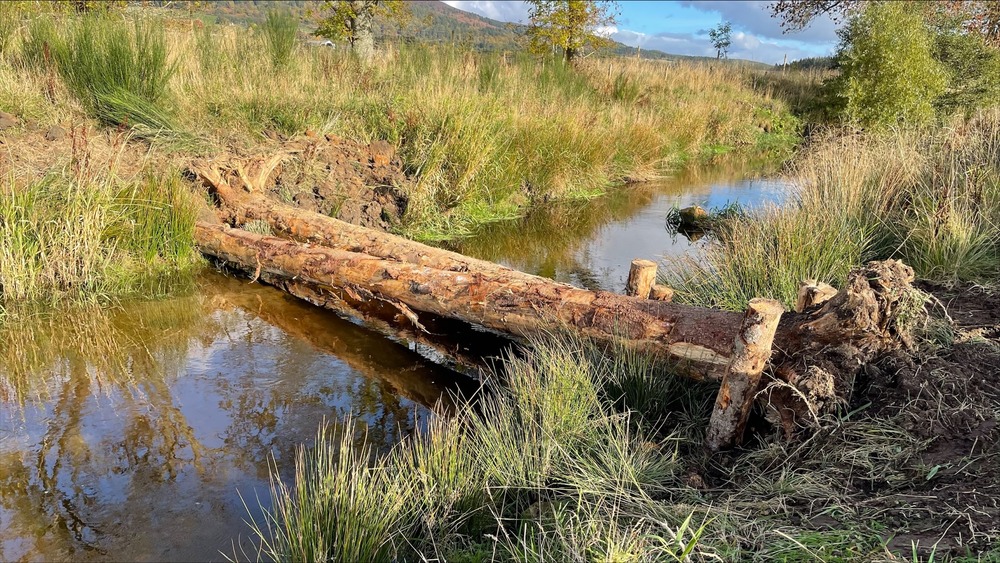 In a recent project, spearheaded by the Dee Catchment Partnership, fifty mature trees that were badly damaged during Storm Arwen have been repurposed from a forest into the riverbed of a burn in northeast Scotland, in an effort to boost natural habitat, particularly for endangered Atlantic salmon.

The mature spruces had been blown and snapped during the winter storms in Scolty Woods outside Banchory. Where they were cut to size by our harvesting teams before being transported to the recently re-meandered Easter Beltie Burn, a tributary of the River Dee. Now these have been buried into the bank and stream bed of the Beltie Burn to create habitats for wildlife and further slowdown the flow of water during periods of heavy rain.

The locations have been carefully selected to deliver the greatest habitat benefits by restoring riparian (riverside) woodlands. Creating instream woody debris, leaky dams and debris dams helps to enhance the habitat of rivers and streams, and benefits natural flood management.

“This project is a great example of putting storm damaged trees to good use, to promote biodiversity and mitigate the effects of climate change, by reducing flood risk.” Says Philippa.

Adding large woody structures to rivers and planting new woodlands alongside river banks can help to create complex and diverse habitats that particularly benefit salmon and support all the native wildlife, from insects to birds and otters.

“Allowing deadwood from our forests to enter watercourses - or purposely introducing it - really enhances habitat for fish. For example, a log on the riverbed will alter the flow of water, causing gravels and silts to settle in different places downstream of the log, creating a range of micro-habitats for the different life stages of salmon,” continued Philippa.

River Operations Manager for the Dee District Salmon Fishery Board, Edwin Third, said: “nowadays these must be among the rarest habitats in Scotland and with Atlantic salmon in crisis, we urgently need to get them back. Hundreds of years ago, rivers such as the Dee would all have flowed through wooded landscapes where riverside trees would have been a vital part of the habitat structure, providing shade, shelter and food – as well as pools and gravel beds when they fall into the river, where aquatic species can hide from predators,” he explains.

Philippa goes on to say how good it was to see storm damaged trees being repurposed for nature in this way, “managing storm damaged trees – and dead wood - is becoming a vital part of our work in Scotland's national forests, both to enhance habitats and promote biodiversity.”

We are retaining windblown Scots pine as cover for iconic pinewood species such as capercaillie and leaving some fallen and standing (snapped trees) that will, in time, become deadwood. While our harvesting team were on site clearing the forest tracks. We have also cleared some small patches that will be planted with Rowan and other native broadleaves as part of a project with the team at the Rare Invertebrates in the Cairngorms project to enhance the habitat for the pine hoverfly, a red-listed species.

In Aberdeenshire’s largest forest, we are retaining pockets of wind blow to provide cover for dens, as part of on-going management of the forest for the Scottish wildcat.