A subterranean secret
A moment in time: visiting a Scottish broch
Rock-Art-Ology
Conserving heritage and habitat at Wallace’s House
A guide to Scotland's Forest Parks 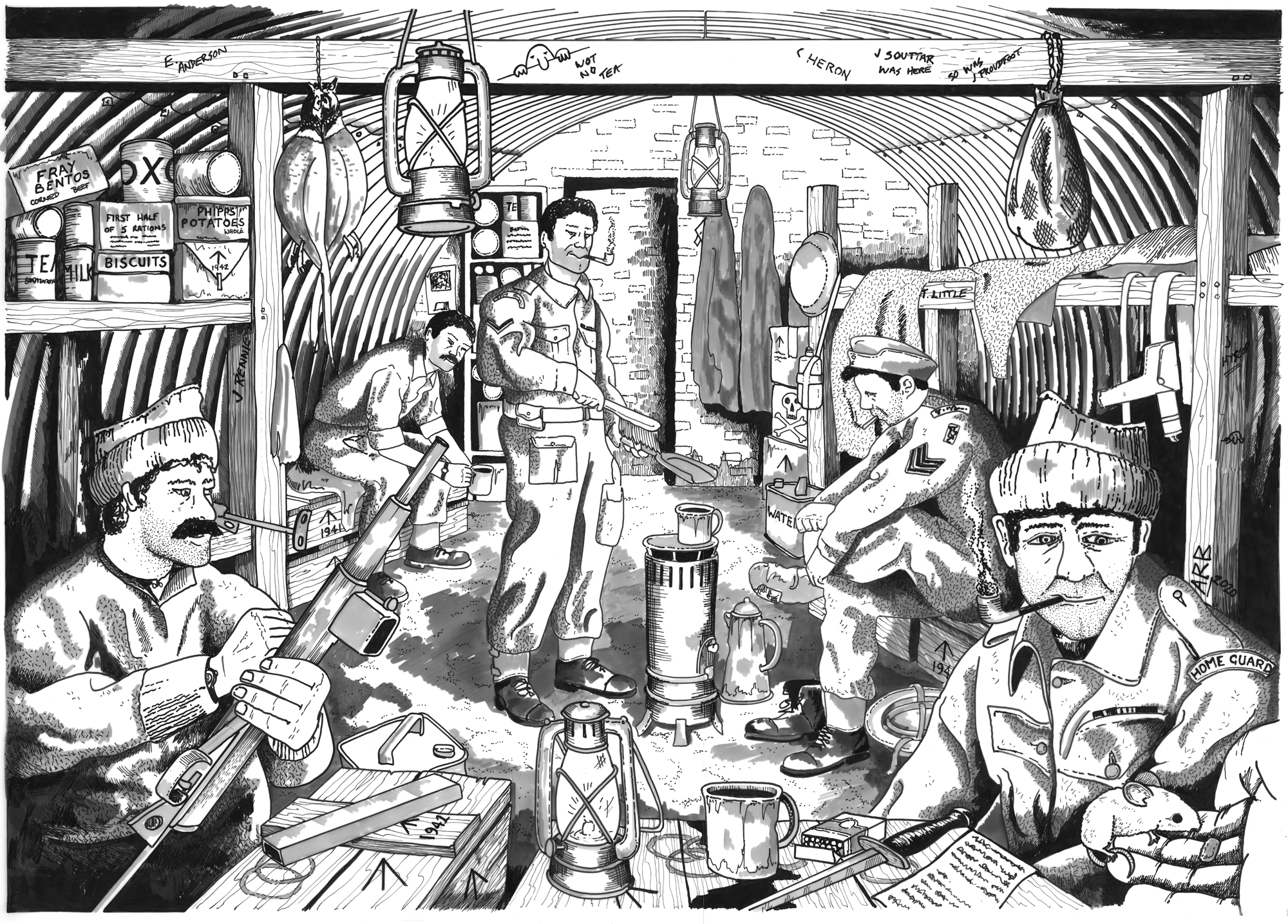 The entrance to a secret underground bunker was recently discovered during tree felling operations in the Scottish Borders. Built during WWII, the bunker would have served as the base of operation for an Auxiliary Unit. The Home Guard were tasked with defending the UK in the event of an invasion, and are better known than the Auxiliaries thanks to the popular comedy ‘Dad's Army’.
The Auxiliary Units were more secretive, and arguably a lot more deadly. They would have worn the same uniforms, but would have operated under different orders. This incredible archaeological discovery could shed new light on one of the Second World War's most closely guarded secrets: the units known as 'Churchill's secret army'.

Illustration: The Craigielands Auxiliary Unit Operations Base as it may have looked in WW2. © FLS / Alan Braby.

These specially trained teams were made up of local estate workers—people who knew the land, like gamekeepers, foresters and even poachers.
Although the Auxiliaries were Home Guard volunteers and wore Home Guard uniforms, they were not expected to participate in conventional defence in the event of the country being invaded. They were tasked with disrupting the enemy with violent sabotage operations in the event that the local Home Guard defence had been defeated.
The Auxiliary Units were not envisaged as a resistance force against long-term occupation, and their service was expected to be highly dangerous. Sometimes known as ‘scallywags’, Auxiliaries had a projected life expectancy of just twelve days, with orders to fight to the death. When the Auxiliary Units were stood down, many joined the SAS and other special forces for D-Day and served with distinction.

Hidden in the hills and valleys

Auxiliary Unit Operations Bunkers (AUOB) of this type are only rediscovered very infrequently, as their precise locations were kept very secret. Most have since been buried and lost. The entrance to our bunker was found by Kit Rodger, a Survey Technician from South Region, and his colleague Kenny Bogle while checking for heritage and environment features prior to tree felling works.
Kit describes looking for the site: “The bunker was missing from our records, but as a child we used to play in these woods and visit the bunker, so I knew it was there. With only vague memories of more than forty years ago, Kenny and I searched through head-high bracken until we stumbled on a shallow trench which led to the bunker door. Only a small opening remained, but we could just make out the blast wall in the darkness beyond.”
“The Auxiliary Unit who used the bunker numbered seven men, armed with revolvers, Sten guns, Thompson submachine guns and a sniper’s rifle,” says Matt Ritchie, FLS Archaeologist. “They also had stores of a plastic explosive known as ‘Nobel 808’ – particularly suitable for demolition – alongside pencil detonators and pressure switches. Our reconstruction drawing (above) shows the Scallywags just back from a training patrol.”

We could just make out the blast wall in the darkness beyond...” - Kit Rodger of FLS, who discovered the bunker

The recently-discovered bunker was built to a standard design. It was accessed via a hatch at the end of a narrow passage. A second escape hatch was reached at the end of a ladder leading from the other end of the bunker. 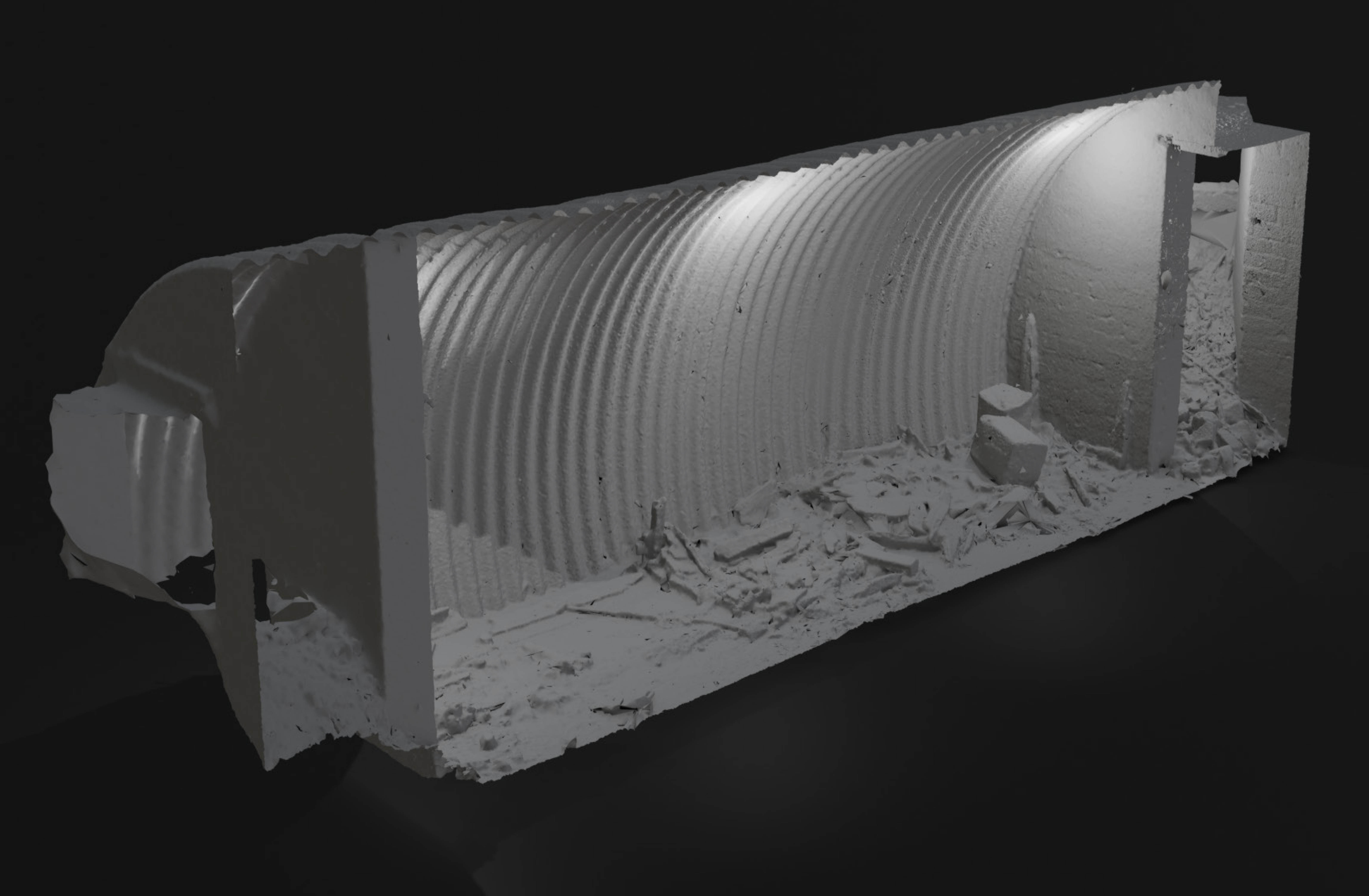 The main bunker space was formed by an arch of riveted corrugated iron sheets over a cement floor. This chamber only measured 7m in length by 3m in width – but it contained bunk beds, a table and cooking stove, and all of the equipment and supplies that the team needed to hand.
The ends of the bunker are built of brick with poured cement roof caps. Both ends had a ‘blast wall’ forming a division from the main bunker space and the access hatches, designed to offer protection against grenades. At each end of the structure there is a small ventilation pipe. Little evidence of the internal furnishings survives, although broken timbers on the floor may be the remains of the original timber bed frames. 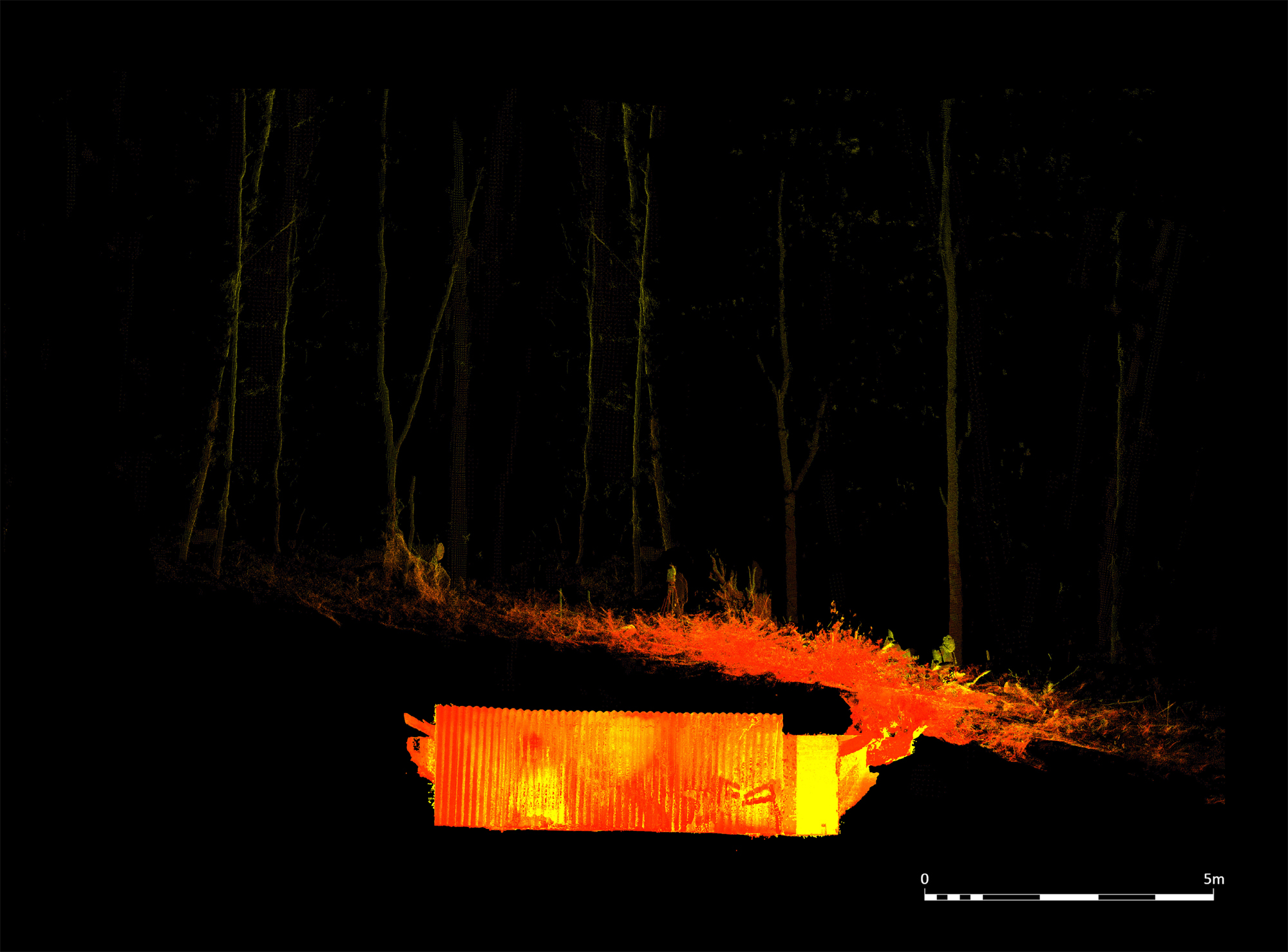 AOC Archaeology 2019 SECTION
The bunker was recorded and laser scanned by AOC Archaeology on behalf of Forestry and Land Scotland to produce the computer models shown in this article, and research into the discovery continues.
Unfortunately, due to the rarity and importance of this site, it is not open to the public, so you can't pay it a visit. The subterranean location makes it a tempting spot for roosting bats, so FLS installed bat boxes and secured the site. As more information emerges from this historic site, we'll keep you posted!

A subterranean secret
A moment in time: visiting a Scottish broch
Rock-Art-Ology
Conserving heritage and habitat at Wallace’s House
A guide to Scotland's Forest Parks