Torrvald farmstead
Back to
Historic woodland use

Over two hundred and fifty years ago, Torrvald farmstead stood in open farmland within the River Tay valley. Above the farm rose the rugged and treeless mountain peak called Craigvinean Hill. Today, Craigvinean Forest has enveloped the mountain; you can find the remains of the farmstead hidden within the trees at the foot of its slope.

Historical records first mention Torrvald in the mid 16th century. In 1684 it was bought by John, Marquis of Atholl and became part of the Atholl estates. 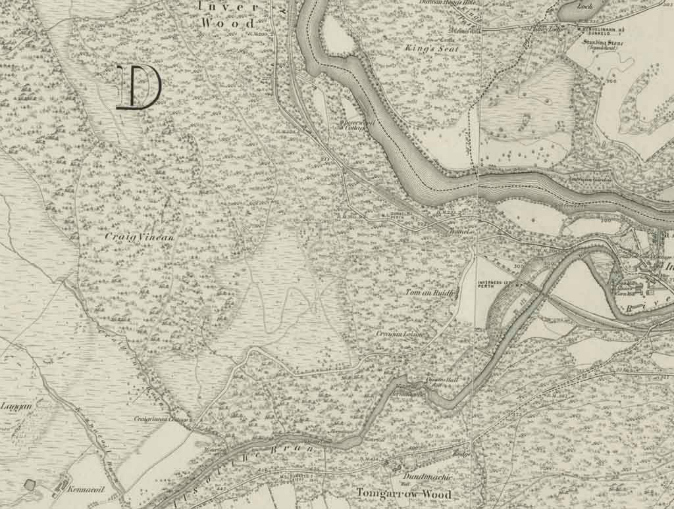 The 1st edition Ordnance Survey 6-inch map (1867) does not show Torrvald; the wood has overgrown the area.

Torrvald was rented to several farmers over the following years, including James Borries in 1751. His rental agreement, however, carried a condition. It stated that if the Duke of Atholl should wish to "take the town into his own hands" he could at anytime. A sign, perhaps, that the Duke had different plans for the land.

In many areas of Scotland in the 18th and 19th centuries, landlords stopped renting their land to small tenant farmers and began to use the land for farming sheep. At Craigvinean, the Duke saw wood as the future for making money on the Atholl estate.

The 2nd Duke of Atholl started the planting of larch trees on a small scale in 1759. Later in the early 19th century, his grandson, known as Planter John, covered the mountain and farmland in trees. It was around this time that Torrvald farmstead was abandoned.

Craigvinean forest is a story in itself; a story of the Atholl family and their interest in growing larch.

Larch is not a native tree to Britain. Mr Menzies of Culdares brought it over from Europe in 1738. He gave several trees to James, (2nd Duke of Atholl); five of these were planted on the lawn of his home, Dunkeld House.

The duke bought and planted seven hundred larches, intermixed with other trees, on the slopes of Craigvinean Hill as an experiment. The mountain land was poor farmland not even worth £3 a year. The plantation thrived and can be considered Scotland's first mountain tree plantation.

His son, John, continued to experiment with growing larch.  It was his grandson, however, who really made the forest into a business.

"I don't believe there is another species in the 29 acres, oak included, except a few spruces, that would bring a guinea" John Murray, 4th Duke of Atholl.

Ship building out of larch

John the Planter saw the potential of using larch to build ships but it was difficult to persuade others to change their building material from fir to larch.

In 1820 two ships were launched, H.M. Frigate Athole built from larch and the H.M. Niemen built from fir. On 13 December 1827, an Admiralty report compared the condition of the two ships. It stated that while the Athole only needed a few, small repairs, the Niemen was so defective it was ready for scrapping.