The wildcat is one of our last remaining mammalian predators and, within the UK, is found only in northern and eastern Scotland. Wildcats are similar to striped, domestic tabby cats but have relatively longer legs, are usually larger and more robust, and have a distinctly bushy tail with a blunt, black tip. They don't have white feet or lots of black spots on their flanks or rumps but do sometimes have stripes. A domestic cat will have a thin, pointed tail, will have more spots and might have white feet.

The landscapes of Scotland offer wildcats a variety of habitats. These include native forests, forestry plantations, open land, pastures, rough grazing, and river-side areas. Together these provide wildcats with abundant prey, cover, resting places and breeding sites. Wildcats mainly eat small rodents, such as voles, and rabbits, but will also eat a range of other prey, including birds, amphibians, reptiles, and insects. 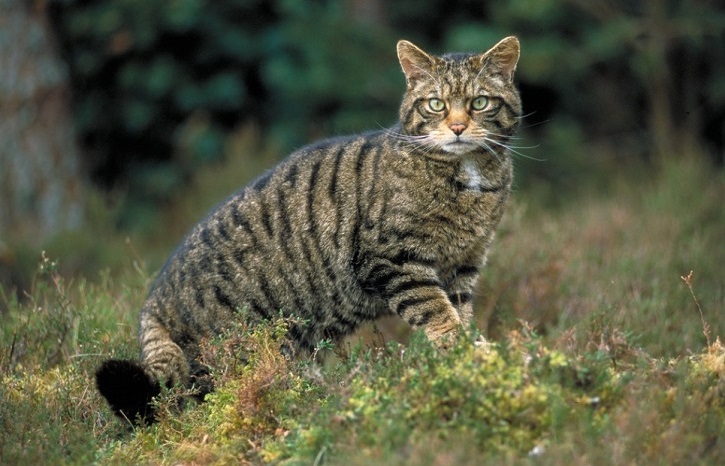 Wildcat numbers are dwindling. The main current threat is from breeding with feral cats, which produces hybrid animals. The proportion of hybrids in the population has increased dramatically. Diseases carried by feral cats are also a problem for the remaining wildcats, and an unknown number of wildcats are killed by land managers who mistake them for feral cats or accidentally catch them in snares. Cars have also killed many wildcats over recent decades, especially at night when wildcats often cross roads. 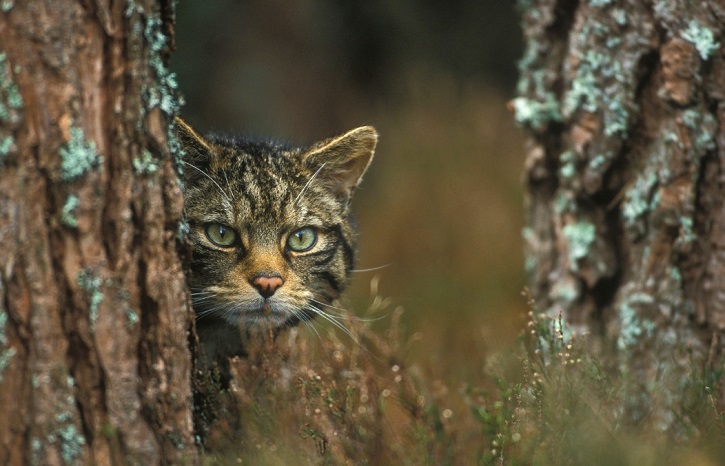 A significant proportion of the remaining wildcats located during recent Scottish Wildcat Action survey work have been found within forestry plantations we manage. This is probably because our plantations are persecution-free havens for wildcats. Furthermore, forest management to produce timber creates a mosaic of habitats that provide wildcats with their basic needs of food and quiet areas for resting and rearing kittens. For example, clear felled and replanted areas are usually grassy and support high densities of voles and mice, which means they are ideal hunting areas for wildcats. Only a small part of any plantation is harvested in any single year, so wildcats will always be able to find large undisturbed areas in plantations for resting and breeding.

However, as wildcats are a European Protected Species, we carry out detailed site surveys prior to any forestry work due to the small chance they will be disturbed. We will often postpone harvesting work to avoid potential disturbance of wildcats and other species who call the forest home. We strictly adhere to the following guidance to minimise any risk to resident wildcats:

The following blog and film - about Clashindarroch Forest - will tell you more about how we manage our forests to best protect wildcats:

Blog: The work we are doing at Clashindarroch - the facts

The Wildlife Conservation Research Unit (WildCRU) at Oxford University is carrying out ground-breaking research on the remaining wildcat population in Scotland. This is being done by fitting satellite collars to wildcats and studying their behaviour. This work is being led by Dr Kerry Kilshaw of Wildcru and is part-funded and supported by Forestry and Land Scotland. The results of this work will further improve our forest management for wildcats.

A recent report by the IUCN Cat Specialist Group (PDF 2MB) concluded that the wildcat population in Scotland is no longer viable and that conservation breeding and population reinforcement will be needed to restore the population. The Royal Zoological Society of Scotland is leading on an EU-funded project called #SWAforLife which will develop the UK’s first wildcat reintroduction centre at the Highland Wildlife Park. We are partners in this project and future releases of wildcats may take place on the publicly-owned forests and land we manage.

How you can help

You can help save Scotland's wildcats by reporting any sightings: