White-tailed eagles are magnificent birds of prey, with a wingspan of over two metres when fully grown.

They became extinct in Britain in the early 1900s but are now living here again after a successful re-introduction programme. Today there are around 100 pairs of white-tailed eagles in Scotland. 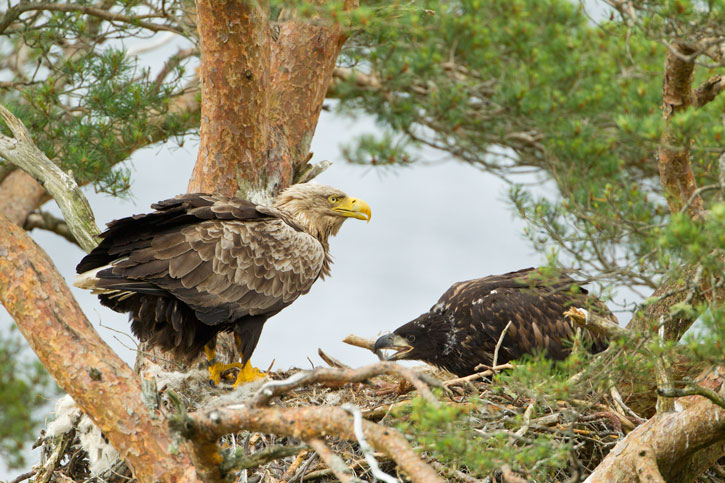 Eagles in the working forest

Our work doesn’t need to stop completely when eagles are around. With careful planning, we can protect known nest sites during the breeding season (February to August). No planting, felling, road-building or other disruptions can take place within 250 metres of a nest.

However, as white-tailed eagles are protected all year round, we have to be extra careful. We work closely with RSPB Scotland to identify new breeding pairs as well as established pairs that have switched nests. The nests are huge but we still need all the help we can get to spot them.

Eagles and the public

Egg collectors aren’t the only problem any more. Eagles and their chicks can also be disturbed by wildlife enthusiasts who just want to get close for a better view.

Nesting birds get used to the large timber lorries driving through the forest – but groups of well-intentioned walkers pointing and shouting can upset the birds. That’s why you might see signs on forest roads asking you to keep walking.

However, we don’t want to shut people out. We want people to enjoy the forest and get as excited about eagles as we are.

The first successful breeding of the re-introduced white-tailed eagles occurred on Mull in 1985. Together with the majestic golden eagle, these birds are the reason Mull is often called ‘Eagle Island’.

It first started in 2000 at Loch Frisa and allowed people to get great views of the eagles without disturbing them. One pair of eagles have since become stars of the BBC's Springwatch programme.

Eagles move nests occasionally, so Mull Eagle Watch and its webcams move too. Over the years, it’s gone from strength to strength – contributing to the £5m that ecotourism puts into the island’s economy each year.