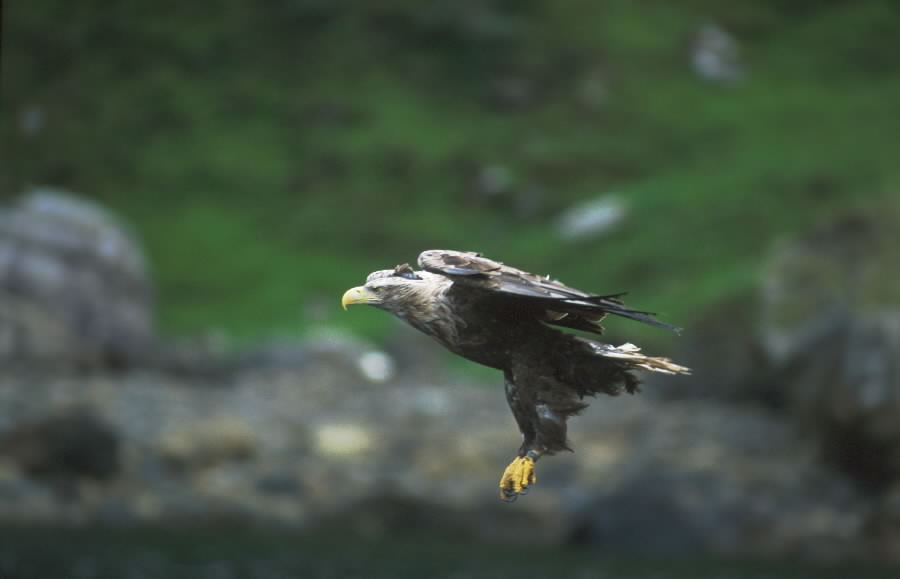 The white-tailed eagle is an international conservation success story. These superb birds became extinct in Britain in the early 1900s, but are now living here again after a re-introduction programme that brought chicks over from Norway to the island of Rum, one of Scotland’s wildest places.

Since then they’ve established other colonies, and have even started nesting in the Lowlands on Loch Leven in Fife. We’re working closely with partners like Scottish Natural Heritage, the Royal Society for the Protection of Birds and local interest groups to protect forest areas that are part of the eagles’ territory, and make sure their nesting sites aren’t disturbed.

Scottish white-tailed eagles like sheltered lochs or sea lochs rather than exposed coastal sites. They build their nest in trees, unlike golden eagles, which tend to prefer rocky crags.

Once they’ve staked out a territory they tend to stay there for life. That means that although they’re rare, with only about 40 breeding pairs, you’ve got a good chance of seeing them in places where they’re established. In Norway, white tailed and golden eagles will share the same territory, but in Scotland the two species establish separate ranges.

They eat fish and birds as well as rabbits and hares. If they can get a meal without working for it, they will: they’ve been seen stealing food from otters, and following fishing boats to eat the scraps.

White tailed eagles are here all year round. Between April and September we run guided trips at the Mull Eagle Watch project, when we hope to be able to show you the birds on the nest.

Come on a guided trip at the Mull Eagle Watch project. If you’re lucky, you might also see these birds elsewhere around Mull, on Skye, from the Garbh Eilean wildlife hide or Ard Airigh in Sunart, in the coastal forests of Argyll Forest Park or at Tentsmuir.