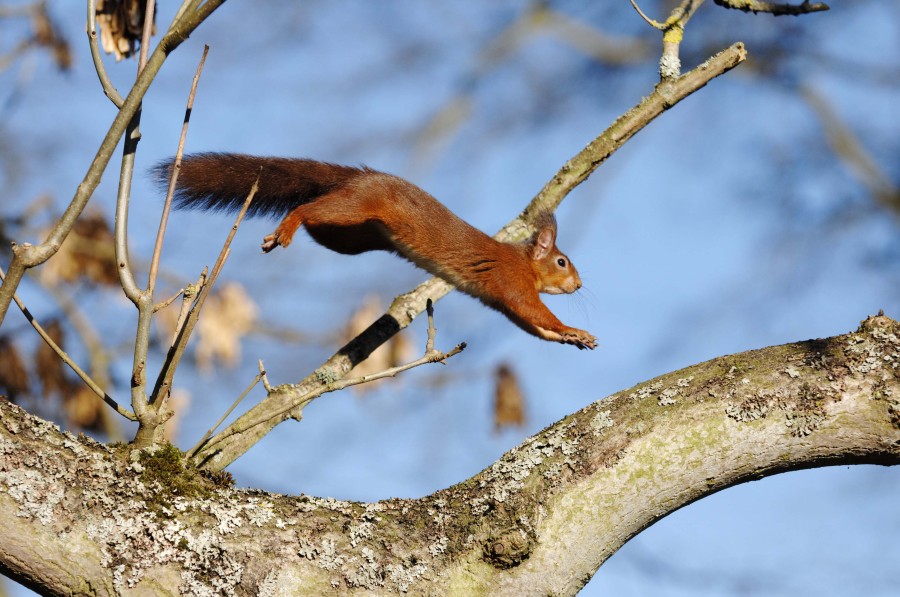 You might see red squirrels in any Scottish wood, but head for the pine forests of the Highlands and Dumfries & Galloway for your best chance to spot these colourful forest favourites.

Watch for red squirrels as you wander through the tranquil ancient oakwoods at Ariundle and Àrd-Àirigh on the Sunart peninsula, then head for spectacular Garbh Eilean wildlife hide on the shore of Loch Sunart. Here you might also see basking common seals and herons and, if you’re lucky, otters. In summer ospreys and sea eagles visit the loch.

Spot red squirrels enjoying their favourite snack of Scots pine seeds along the wooded trails at Glenmore Forest Park in the heart of the Cairngorms National Park and in the ancient Caledonian pine forest at beautiful Glen Affric. Watch for red and roe deer and the rare and elusive pine marten there too.

For easy access, there are red squirrel viewing screens very close to the car parks at Glen Righ near Fort William and at Bennachie in Aberdeenshire.

Red squirrels are at home in all types of woodland and can even be spotted in parks and gardens, but they like mixed conifer forests best.

Scotland is home to most of Britain’s red squirrels but their numbers are quite small – less than 150,000 across the whole of Britain. They are under threat from their bigger and more adaptable grey American cousins, so we work hard with our partners to control grey squirrel numbers and to plant and maintain the conifer forests across Scotland that red squirrels prefer.

Red squirrels love seeds, particularly from pine, spruce and larch cones. It has been estimated that a single squirrel can eat the seeds from up to 20,000 cones in a year!

They also eat nuts, fungi, shoots and fruits of shrubs and trees and sometimes birds' eggs. A red squirrel can tell if a nut is good or bad just by shaking it in its paws. Look out for fungi placed high up on tree branches in autumn: squirrels leave them out to dry before hiding them away for the winter, along with stores of seeds and nuts.

You can see red squirrels all year round because they don’t hibernate. You may hear the scratching sound of a red squirrel’s claws in the branches before you see it – and it might chatter crossly or even stamp its feet if you surprise it.

Red squirrels are active in the daytime but, like us, don’t really like being out in bad weather. They also enjoy an afternoon nap, especially when it’s hot. From January into early spring watch for red squirrels racing through the trees and spiralling up and down the trunks. This is mating time and the males are chasing after the females.

Despite their name, red squirrels aren’t always bright rusty red – some are pale brown, grey or almost black and their tails often go quite blond in summer. However, unlike grey squirrels, reds always have distinctive hairy tufts on their ears. 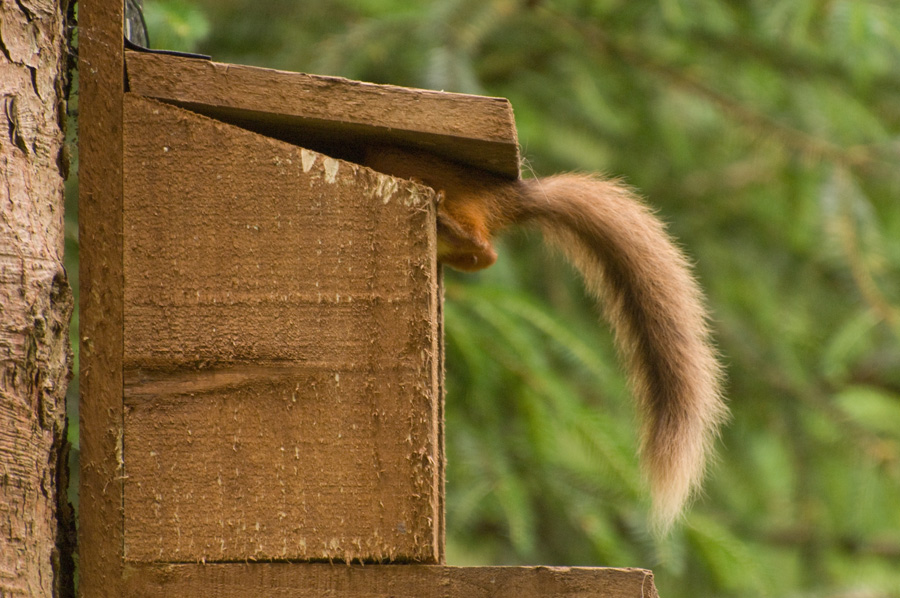 See if you can spot the red squirrels at The Lodge Forest Visitor Centre on our live webcam...