The 7stanes are seven mountain biking centres spanning the south of Scotland, from the heart of the Scottish Borders to Dumfries and Galloway. However, it's more than just the name of the centres...

A series of sculptures...

'Stane' is the Scots word for stone, and at each of the 7stanes locations, you'll find a unique stone sculpture - a stane - reflecting a local myth or legend.

The stanes are found in prominent locations on the trails in the forests. They’re accessible on foot or by horse as well as by bike, and range in size from one to three metres high and from two to six tons in weight. 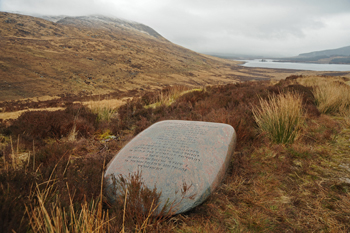 The Glentrool area of Scotland is known for its stone age past and legends of Scottish and Irish giants throwing objects at each other. The Giant Axe Head - a 1.5 ton sculpture which overlooks Loch Dee - closely resembles actual neolithic stone axes and has runic text inscribed onto its top surface. 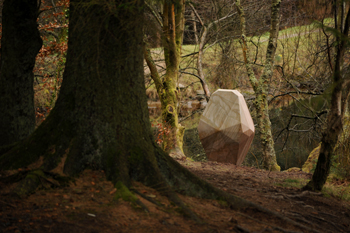 Kirroughtree's trails are known as the 7stanes' hidden gem, and the sculpture here takes its inspiration from the trails' reputation and their close proximity to the Creetown Gem Rock Museum. This 1.75 ton stone is made from Scottish pink quartz. 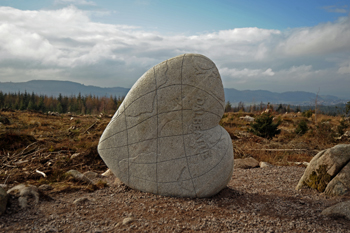 A mammoth piece of granite was donated from a local quarry to make this stane. It symbolises Kirkcudbrightshire's history as a town that was once the heart of the granite industry in the south of Scotland. The inscription indicates the places the granite has been exported to all over the world. 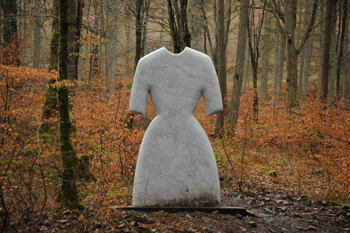 Situated in the 'misty glade' - a beech wooded area with a small stream - this stane is made from white marble. The 2.25 ton sculpture appears to be standing by itself. Its surface is engraved with a local lace pattern. 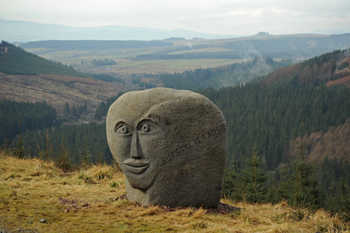 The head stane is made from a glacial granite boulder. It's 1.5 tons and looks south towards Ae village and the Solway. The stane has a carved mouth, ears and eyes and is inscribed with the translation of a Norwegian poem. 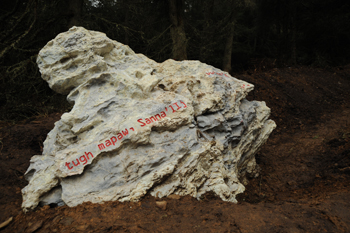 This six ton Ledmore marble stane contains text carved in Klingon, with the obvious implication it may not be of this world. 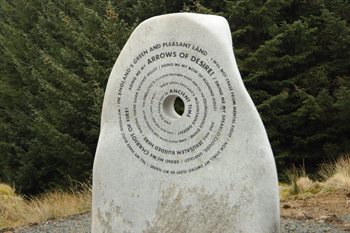 This stane stands close, and parallel, to the Scottish - English border. On the north side, Auld Lang Syne is inscribed to represent Scotland. On the south side, representing England, are the words of Jerusalem. The hole in the middle allows people to stand on either side of the 'border' and shake hands through the sculpture.

Who sculpted the stanes?

The lead artist on the Seven Stanes Arts Project was Gordon Young. Born in Carlisle, Gordon attended the local college before going on to Coventry Polytechnic and the Royal College of Art in London.

He previously worked at the Yorkshire Sculpture Park and Welsh Sculpture Trust before becoming a full time artist in 1984 and has many awards to his name, including the Blackpool Civic Trust Award in 2007 and Royal Society for Arts, Art for Architectural Award in 2001.

Gordon was supported in the Stanes project by Russell Coleman, Ronnie Heeps and Mark Powers. The huge eye-catching works of art took six months to create at the premises of Galloway Granite at Sorbie, with which Gordon has had a close association for over 20 years. The stone for the sculptures comes from a variety of locations across the UK.