The much-loved red squirrel is one of Scotland’s iconic woodland species – but its future is uncertain as the introduced American grey squirrel expands its range.

Not only is the larger grey squirrel out-competing its native cousin for food, it also carries the squirrelpox virus – harmless to greys but fatal for reds. 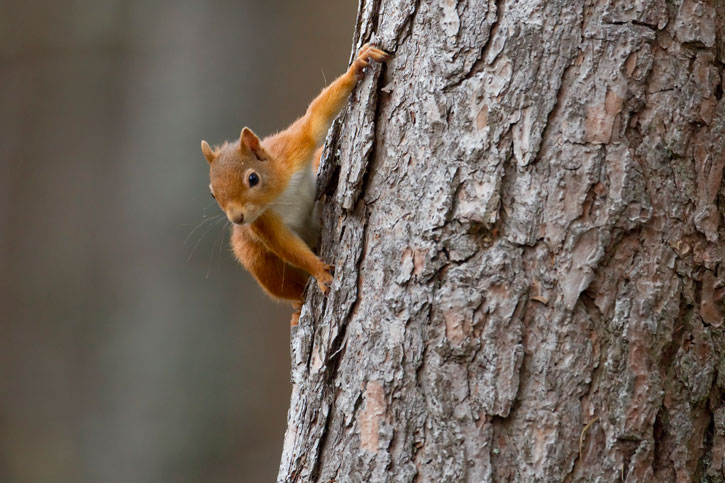 One of the best ways to protect red squirrels is to create ‘strongholds’ – areas of focused conservation work. Better still if these strongholds are islands – so, in Scotland, the Isle of Arran is really important. It supports a large, thriving population – with no greys.

The Arran Red Squirrel Project was established in 2013. It’s funded by the People's Trust for Endangered Species and Forestry and Land Scotland, and led by the Royal (Dick) School of Veterinary Studies, Edinburgh.

The vets’ role is important – thankfully, their tests showed that Arran's red squirrels are healthy, with no evidence of the virus. We have a huge part to play too, as Scotland's national forests and land cover more than 8,000 hectares of the island. So, we are working with members of the Arran Red Squirrel Project and using our local forest knowledge to make long-term plans that put red squirrels first.

You might think that because red squirrels particularly like mixed conifer forests, our demand for timber is always going to cause a problem.

With help from the University of the Highlands and Islands, we’ve been conducting research to find out how our work affects red squirrels. The results have been encouraging. By tagging squirrels with very small GPS units (under licence from Scottish Natural Heritage), we discovered that their territories shifted only slightly if we were working nearby.

It’s early days and a bigger study is planned. However, there is evidence to suggest that with careful planning, we can carry out essential work in the forest and still look after this iconic animal.

As part of our efforts for this species, we also fund the work of Saving Scotland’s Red Squirrels in Scotland’s national forests in Aberdeenshire, Tayside and southern Scotland.