Aoineadh Mòr township survives as a testimony to the people evicted from their homes at a time often referred to as the Highland Clearances.

On the 1st edition Ordnance Survey 6-inch map (1875) Aoineadh Mòr is shown as abandoned, the buildings are not coloured in back indicating they are unroofed and ruined. You can see that the settlement is scattered along the river valley and is very remote. 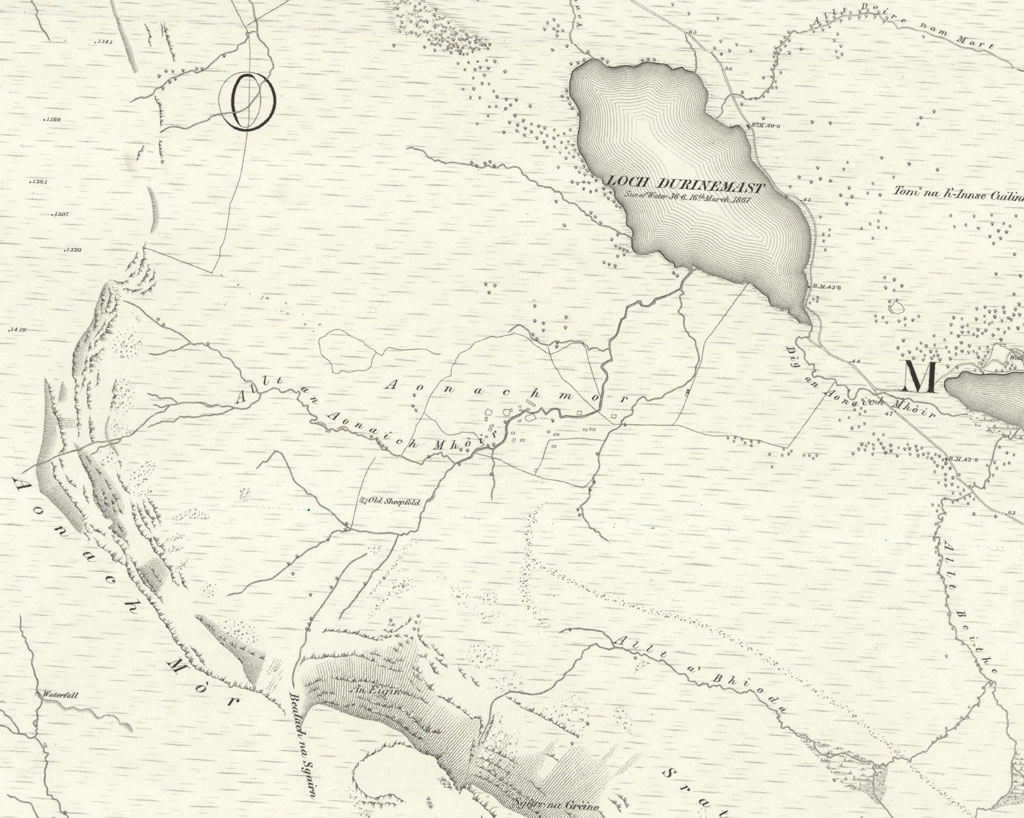 The story of these evictions is brought to life through Mary Cameron, who gives a personal and vivid account (see bottom of page) of the flitting day; the day her family and village were forced to leave their homes.

Until recently the site was hidden within the undergrowth and trees of Lochaline Forest. In the 1990s, however, Forestry Commission Scotland carefully uncovered it. Today you can walk among the remains of more than twenty-two stone buildings all enclosed by an earth bank known as a head-dyke.

These buildings provide a picture of a community of families who reared cattle and grew crops on small sections of open land (the run rig system).  Many were houses where families, like Mary's, would have lived.  Others were corn drying kilns and winnowing barns where they would work to prepare their crops after harvest.

Small stone-walled enclosures called kail-yards were garden plots where you could grow vegetables such as kail (a cabbage-like vegetable), hence the name kail-yards.

The exact location of Aoineadh Mòr is grid reference NM 656 519.

For full details of how to get here, please see Aoineadh Mòr.

The people of Aoineadh Mòr were tenant farmers. They did not own the land they farmed, they rented it. In 1824 Christina Stewart, the new landowner, forced the villagers to leave their homes. The reason for this was simply profit; replacing tenants for sheep farming.

"When we got the 'summons to quit', we thought it was only for getting an increase of rent, and this we willingly offered; but permission to stay we got not." Mary Cameron's eviction account to Minister Norman MacLeod, in Glasgow (translated from Gaelic). Recorded in P. Gaskell (1968) Morvern Transformed.

The police arrived and began to move people from their homes. Mary's family had to make a difficult walk across the hills. At the top of Knock-nan-Carn (Hill of Cairns), they looked back on the destruction of their homes by the people who had forced them to leave.

"The hissing of the fire on the flag of the hearth as they were drowning it, reached my heart. We could not get even a bothy in the country; therefore we had nothing for it but to face the land of the strangers (The Lowlands)" Mary Cameron's eviction account to Minister Norman Macleod, in Glasgow (translated from Gaelic).

Anne Sinclair reads the story of Mary Cameron's account of the eviction of her family from Aoineadh Mòr in English and Gaelic.

Two commemorative walks take you to the settlement. These walks have been named in honour of the journey made by Mary and her husband James, carrying their children.