The ruins of Arichonan still stand tall on the slopes of Gleann a Ghaolbhan. Here you can explore inside the homes of people who lived there over 150 years ago. Evidence within the walls can tell us how these people lived and worked. Why not visit and see what you can discover? 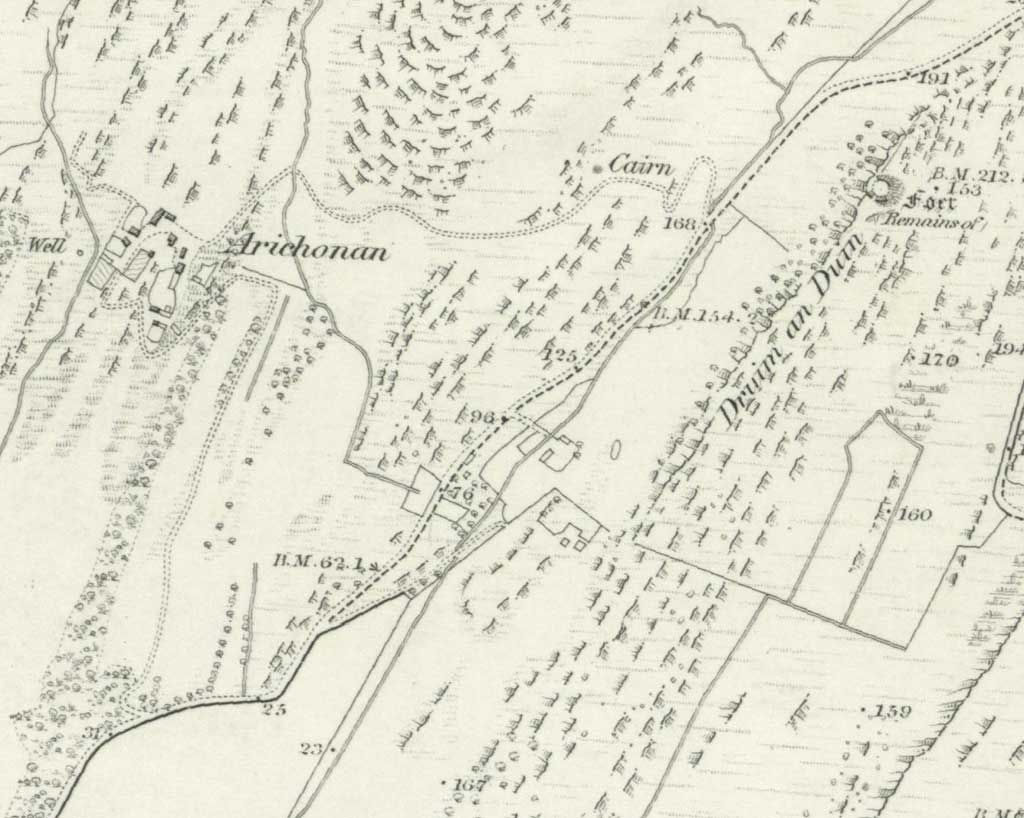 The first Ordnance Survey map from 1865 shows many roofed buildings. Shepherds lived at Arichonan after the evictions.

The name Arichonan is known to date back as early as the 1600s. The lands of Arichonan were feued in 1654 by the Campbells of Auchenbreck to Neil MacNeil from South Knapdale. At the beginning of the 19th century it was bought by Neil Malcolm of Poltalloch. In 1848, he evicted the people from Arichonan Township.

Like many landlords at the time, he did this to replace the tenants and their small farms with a large-scale sheep run managed by the estate. Today, the ruins of the shepherd's house rise amongst the remnants of the homes abandoned after the evictions.

The exact location of Arichonan is grid reference NR 774 912.

The best place for access to the forest is Gleann a Gealbhan. There is a waymarked trail to Arichonan from the car park.

Tenants did not always leave quietly when landlords ordered their eviction.  They did not want to lose their homes and livelihood and decided to fight.

A court found Catherine Campbell, Mary Adams, Neil McMillan and Duncan McLean guilty and imprisoned them at Inverary Jail.  The jail still holds the records of their imprisonment.

Many people in this area left Scotland to go to Canada and Australia. Some wanted a better life, others left because they had lost their homes and needed a new place to start again.

Neil Malcolm bought land in Australia in the hope of moving his unwanted tenants there but they refused to go. Considering their history, this seems unsurprising.

In 1849, the McLean family from Arichonan chose to move to Canada instead. They settled in Ekfrid Township in Middlesex County.