Polmaddy
Back to
Visit heritage sites

In a clearing at Castlemaddy Woods, you can explore the remains of Polmaddy, a traditional Galloway ferm-toun, (farming village). Changes in farming during the 18th and 19th centuries led to the abandonment of many such small farm villages in this area.

By the 19th century, the 1st edition Ordnance Survey 6-inch map (published in 1853) records Polmaddy as in ruins. 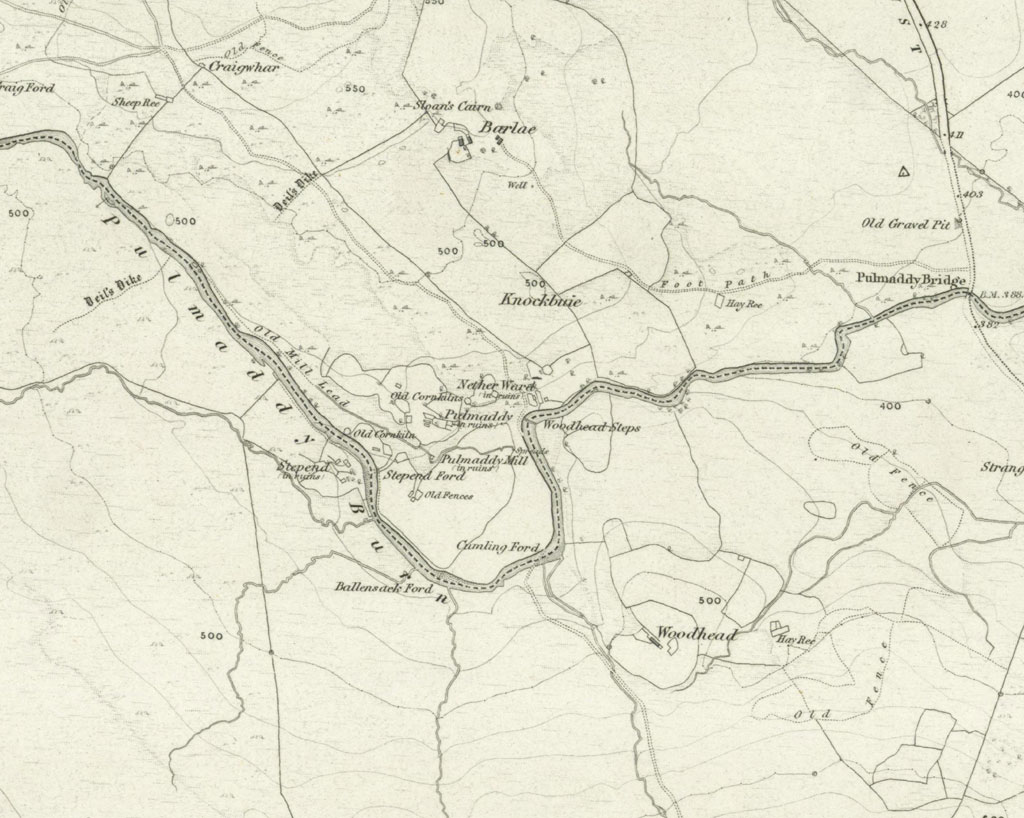 The earliest known records date Polmaddy to the 16th century. In 1505, William McClelland, Laird of Bomby, owned it. King James IV gave Polmaddy to James Hepburn in 1511. By 1541, however, it had returned to the McClelland family; recorded in the will of Thomas McClelland, William's grandson.

In the 1700s, landlords began to make changes to the way they used the land. They were looking to modernise and so introduced new agricultural machinery and farming practices. Called improvements, these changes aimed to increase productivity and make more profit.

The General Inclosure Act of 1801 allowed landlords to join the land of the small tenant farmers to make larger cattle or sheep farms. This was another element of the improvements. It meant often evicting the small scale tenant farmers, such as those living at Polmaddy.

The situation leading to Polmaddy's abandonment in the early 1800s is unknown. It is more than likely, however, that it was a victim of the improvements.

Investigate the remains of Polmaddy ferm-toun and you will discover one building slightly larger than the others. This is the old mill, connected through local legend to the outlaw king Robert the Bruce.

In 1307, during the Scottish Wars of Independence against the English, Robert hid in the hills of Galloway.  Legend says that he took refuge at the miller's house in Polmaddy before his victory against the English at Glentrool. Later, when he was king of Scotland, he rewarded the miller by giving him the ownership of the mill.

The earliest historic reference to a mill at Polmaddy is over three hundred years later. It is marked on Pont's map published in 1654. Esther Mackormack of Barlae had the rights to the mill in 1697.

Tenant farmers were thirled, meaning legally bound, to have their grain ground into meal at the local mill. They had to pay a portion of the grain for the privilege. This was often not popular.

One of the types of crops the farmers grew was bere barley, frequently used to make ale.

Unusually for a small 'ferm toun', Polmaddy had its own inn, called Netherward. Located on the main road from Kirkcudbright to Ayr, it was a place for weary travellers to get some refreshment.

A survey of the site and a small scale excavation informed the plans to protect it.

The fieldwork identified a variety of structures including several houses and byres. A byre would have held animals or crops.

Unusually, four houses are grouped together, two semi-detached houses on either side of a small street.

There were six corn-drying kilns on the site. These would have dried the crops brought in from the fields, farmed in the surrounding area. The corn would then have gone to the mill.

The mill was water-powered. The water was carried down from the nearby Polmaddy burn to the mill pond. This was done via a wide, stone lined channel, called a lade.

The sluice gate controlled the supply of water stored at the mill pond. Opening the gate allowed water to run to the mill, turning the waterwheel, which then turned a large grinding stone that ground the grain.

The exact location of Polmaddy is grid reference NX 588 878.

For details of how to access the site see the Polmaddy web page. The site is immediately accessible from the car park and the trail around the village is clearly signed from there.