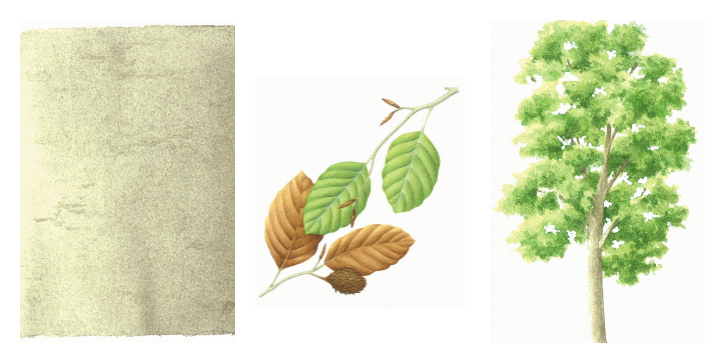 There is some current discussion about whether beech – or Fagus sylvatica in Latin – would naturally have reached Scotland by now from post glacial populations in Southern England. Whilst its native status is still open to question, Forestry and Land Scotland is keen to use this species where it will meet our objectives such as creating beautiful landscapes and providing hard wood timber. However, we will avoid planting beech in or near ancient woodlands that are not adapted to its shade. Beech is particularly damaging in western locations where it could invade temperate rainforest and pose a substantial threat to rare lichens and bryophytes.

In Scotland, you’ll find several beech trees of note dotted across the central belt. This deciduous species favours chalk downlands, but can also grow well on light soils, and its dense shade usually keeps the forest floor clear of undergrowth.

On the short walk up North Berwick Law, in East Lothian, sits a handful of gnarled, windblasted trees. These are all that remains of a woodland planted by local laird, Sir Hew Dalrymple, to signify the union of the Scottish and English parliaments in 1707.

This imposing copper beech sits proudly in the grounds of Belmont Castle in Perthshire. She was named by former Prime Minister, Henry Campbell-Bannerman, who enjoyed sitting in her shade, mulling over his policies.

Atop a lonely hill near Monikie village in Angus, sits this sinisterly named beech. Wrongdoers met their ghoulish end swinging from the branches of the Gallows Tree – a highly visible forewarning to any would-be criminals in the surrounding area.

An extremely rare example of a 'layering beech' can be found at Kilravock Castle, near Nairn. A layering beech is characterised by its octopus-like limbs, some of which take root in the ground and form further small trees. This particular tree has romantic roots too. It is fabled that an early landowner was caught in a tryst with the housemaid under this beech. Since then, generations of lovers have etched their initials into the bark.

Named after the colourful landlady of a local tavern, whose secret sideline was an illicit still from which illegal alcohol was smuggled into nearby Perth.

Take a leisurely drive down the A93 and witness the wonder of the world’s tallest hedge, which stands at an impressive 30 metres tall.

It’s the trunk of this beech that makes it quite remarkable. The huge distorted mass of burs and branches is up to seven metres wide in some places. Find it in the gardens of Glasgow’s Pollok House.

The Seven Men of Moidart

Standing in private land on the northern shore of Loch Moidart, these five trees (once seven) were planted to commemorate the men who landed with Bonnie Prince Charlie at Glenfinnan in 1745.