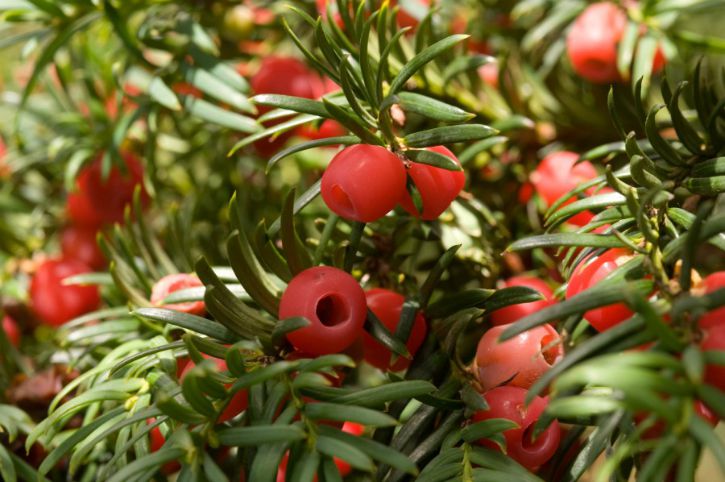 One of the oldest living trees in northern Europe, the yew - or Taxus baccata - is one of the three conifers native to Britain (the others are Scots pine and juniper). They bear succulent red fruits instead of cones.

These huge and ancient trees are common in churchyards, and some are thought to be thousands of years old.

At the fine old age of around 5,000 years, the Fortingall Yew is certainly one of the oldest trees in the United Kingdom, if not in Europe. This venerable specimen lives in a churchyard, west of Aberfeldy. It's believed centuries ago, locals cut large sections off the tree to create quechs - or drinking cups - and has been used as an arch for funeral processions to pass through.

This living link to one of Scotland's literary greats, Robert Louis Stevenson, stands in the private grounds of a house in Colinton, Edinburgh. The Treasure Island author is known to have played in the branches of this ancient yew, when he spent some of his childhood living in the house with his grandfather.

This storied specimen is a magnificent sight to behold. It's vast ring of outer growth covers a large area of ground, creating a canopy of branches and shady inner sanctum. Legend has it the demise of Mary Queen of Scots' second husband was plotted beneath these very branches. The tree sits in private grounds in the East Lothian estate of Whittingehame.